The NCDA will be hosting another online tournament to raise money that will help jump start the organization’s first officiating fund. Our goal for this fund is to be able to pay for referees not just at Nationals, but other tournaments too. This online tournament will feature Call of Duty: Modern Warfare (Gunfight mode). The tournament will be held on October 24 and registration is due by October 11, at 11:59p.m. eastern time.

END_OF_DOCUMENT_TOKEN_TO_BE_REPLACED 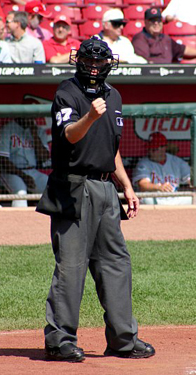 On June 2, 2010, baseball fans witnessed some of the best things about the sport. Detroit Tigers fans will be quick to disagree. Who can blame them? Armando Galarraga, pitcher for the Tigers, had the game of his career, officially retiring 27 out of 28 batters without a hit. The lone standout to Galarraga’s streak would be rookie Jason Donald, chalked up as a single.

The controversy? Donald’s single, the 27th at bat for the Cleveland Indians, was a blown call by umpire Jim Joyce, costing Galarraga a perfect game and a no-hitter. That’s not a matter of opinion, as calls often are. Joyce personally apologized to Galarraga minutes after the game, later saying “I just cost that kid a perfect game” on local radio. Replay showed Donald was approximately 2 feet from the base when Galarraga, then positioned at first, made the catch to force Donald out.

There are a couple of ways to properly frame this scene. The first is to note the rarity of the perfect game. In almost 400,000 games of Major League Baseball, 20 have achieved perfection. Sweeping a presidential election might be the only task more difficult. Galarraga earned that perfect game and should be rightly credited for it. For Joyce to take the rarest of achievements away from a player with a clearly incorrect call is bad for baseball and infuriating for Tigers fans.

The other way to frame this is in terms of what happened after the call by Joyce. If you watch the replay, you’ll see Galarraga’s reaction to the call was one of the calmest responses ever observed. No tirade, no outburst, just a smile. You just don’t see that kind of behavior in professional sports.  Joyce’s actions after the play were equally as rare. Officials make bad calls, but personally apologizing to the aggrieved player and announcing to the media that you screwed up is unheard of.

In short, the participants involved acted the way people are supposed to behave. As the NCDA enters the 2010-2011 season, it’s nice to know officials at the highest level of competitive sports err, sometimes egregiously so, and players at the highest level can act with the docility Galarraga exhibited.

There’s no question officiating has been a sticking point since the NCDA’s inception. Teams need to place a greater emphasis on educating their players on the rules and on how to properly officiate a game. Further, the practice of grabbing a couple freshmen at the last second and telling them to ref needs to end. New players are often in the worst possible position to officiate, having played precious few games themselves.  At the same time, the hysterics some players resort to when receiving an unfavorable call also needs to end. If a man can have history taken away from him and smile, there can be no justification for getting into a shouting match over a dodgeball match.  Hopefully this baseball game and the MLB’s subsequent actions can serve to benefit NCDA operation this coming season.