END_OF_DOCUMENT_TOKEN_TO_BE_REPLACED

PJ Antalek is September’s Baller of the Month! He is an Akron captain and member of the 2022 All-Ohio team. Nicole Cutich got the chance to interview PJ at practice, and they talked about players in the league, his pregame rituals, his iconic overtime hit against BGSU, how he apparently doesn’t know what a walk up song is and more. Congratulations PJ! 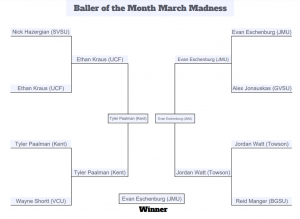 END_OF_DOCUMENT_TOKEN_TO_BE_REPLACED

After leading Grand Valley State University to yet another Michigan Dodgeball Cup title, along with a strong showing at GVSU’s Blast from the Past tournament, Ben Tubergen earned himself “Baller of the Month”.  Ben has emerged this year as one of the most dangerous players in the league with a strong and accurate throw, to go along with good catching skills.  He has been a catalyst for GVSU’s offense so far this season, and will be a key to their success in a few weeks when they compete at Nationals 2017 in Lexington, KY.

I had the chance to chat with Ben after he won Baller of the Month.  Our conversation touches on a number of topics, from his mindset heading into Nationals, to his dodgeball career outside of the NCDA, to the controversy over what grade he is actually in.  I even ask him the ever-important question: “Chipotle or Qdoba?”.  Here is my interview with GVSU’s Ben Tubergen. END_OF_DOCUMENT_TOKEN_TO_BE_REPLACED