James Madison will enter this tournament with an undefeated 8-0 record.  The issue with this record is that all eight wins have come against East Coast teams.  Unfortunately for JMU, EC teams are not ranked as high as Michigan Region teams, thus the reason why the Dukes are only #5 in the current standings.

JMU, led by Captain Derek Pierce, will have a chance to prove they are worthy of the #1 ranking on March 26th.  Games against East Coast foe Towson, as well as #1 GVSU and #3 MSU will test the team from Harrisonburg, Virginia.  If JMU expects to leave Towson with an undefeated record they will need to play their best tournament of the season.  If they do happen to beat both GVSU and MSU at this tournament, there is no doubt they should be considered the #1 team in the country.  A lot will be riding on March 26th for JMU Dodgeball.

Can GVSU keep their #1 ranking?

Grand Valley is coming off a stellar performance at the 2016 Michigan Dodgeball Cup.  The Lakers went 3-0 at a tournament that few expected them to do well at.  Claiming the #1 ranking after MDC was a big boost for GVSU, but they have a few speed bumps in their way before Nationals.

Grand Valley will take on SVSU in a single game on March 20th, and if they are able to win that one, they will be one tournament away from a likely #1 seed heading into Nationals.

The Lakers will certainly be tested at Towson, with games against JMU, UMD, MSU, and TU.  If they can go 4-0 on the day, the #1 seed should remain in their hands leading up to Nationals.

How will UMD and VCU hold up?

Maryland has had a below average year in 2015-16, while VCU has improved significantly but they are not yet at the level of the other four schools in attendance.  Clearly it will be an uphill battle for both of these schools at the MVEC.

UMD will face a number of teams highly favored to beat them, while VCU will see if they can hold up after a win over UMD last week put them in a new category.  VCU will do what they can to keep up with the big dogs of the East Coast and Michigan Regions, while UMD will try to rebound from a disappointing BEAST V tournament.

Can Michigan State rebound from MDC?

Michigan State had so much momentum heading into the Michigan Dodgeball Cup on Feb. 27th, but it all disappeared instantly when they went 0-3 on their home court.

This tournament has a plain and simple storyline for the Spartans: can they rebound from that awful showing?  MSU is easily one of the most dangerous teams in the courty, and playing against some new competition on the East Coast will be a good opportunity for them to get back in their grove.  MSU should have a strong showing at the MVEC and set themselves up nicely for Nationals 2016.

Will Towson finally take down JMU?

Towson came so close to forcing overtime with JMU at BEAST V.  If Towson wants to finally take down the East Coast royalty that is JMU, they will need to do so on their home court on March 26th.

TU has never had as big of a home tournament in their club’s history.  Two Michigan schools will make the trip, along with the other top teams on the East Coast.  Everything is set up for Towson to have an amazing finish to the regular season.  TU is coming of the BEAST tournament where they had no trouble beating every opponent they played besides JMU.  If the Tigers can improve from that tournament, they will be a dangerous team for anyone to face at MVEC.

This tournament should be packed full of close and exciting matchups.  The way that this season has gone, you can expect the unexpected with a tournament like this.  SO on March 26th, make sure to tune in to the Livestream of the first ever MVEC tournament held at Towson University! 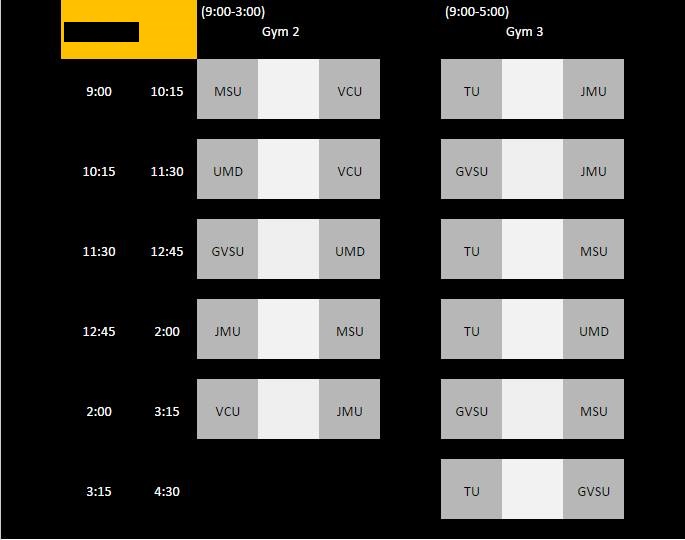 5 thoughts on “Mark Your Calendars for March 26th”