CHICAGO – Office of the Director of Officiating (and Records):
The NCDA conducted another survey of the abilities of the League’s student-athletes during Nationals 2016 in Bowling Green, Ohio. This year’s Fastest Arm was named in honor of the current record holder, Wes Hopkins of Kentucky, and presented by the DePaul Dodgeball Society for supplying the radar gun. Mr. Hopkins’ record from Nationals 2013 still stands at 83 miles per hour.

To survey and detail the average speed of the collegiate dodgeball athlete’s throw. This will be repeated at future Nationals and select events.

Contestants were given the opportunity to throw four PG8.5″ rubber dodgeballs at a wall. Most threw four times, but a small some threw less. Participants stood at least 25 feet from the wall and were allowed to deliver the ball in any manner, gripping, pinching, palming, however.

Results were gathered on paper and later entered into a spreadsheet:

416 total throws were recorded from these 115 contestants. Additionally, divisions were added for additional analysis of Alumni, Women’s, and Junior contestants. 6 Alumni, 8 Women, and 1 Junior recorded throws.

Due to equipment margin of accuracy, the margin of error in mph readings is +/- 1 mph

Only 16 records survive from the last competition held at Nationals 2013, courteously supplied by Zac Brown [UK]. The average of those records was 62.188 mph, including the record setting 83 mph throw from Wes Hopkins.

While the average is 56.695 mph, this specific mileage does not actually occur very often. Contestants were either just above or just below the mean, although this is slightly outside the margin or error for the recording device. Throws of 56 and 57 mph account for only 14 (3.337%) of the total throws recorded. The 52 throws that range from 55 to 58 make up 12.5%. A wide range of throws were logged: collegiate dodgeball players recorded throws across a 46 mph range, from 30 to 76 mph. 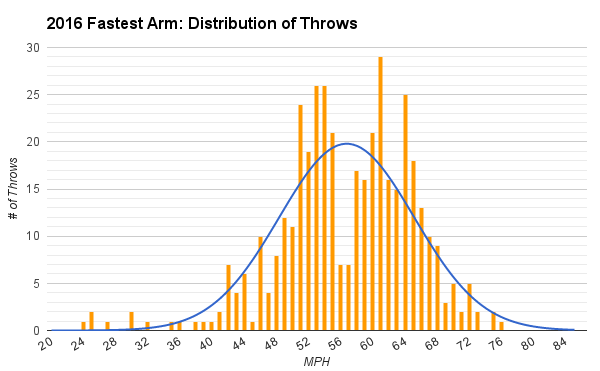 11 contestants (9.565% of participants) recorded averages above the 68th percentile, or higher than one standard deviation of the sample mean.

The fastest throw of the 2016 Contest was 76 miles per hour, recorded by Brian Peacock of The Ohio State Dodgeball Syndicate in his fourth attempt. Mr. Peacock’s average throw was 73.00, close to the 95th percentile of 73.460%. Two of the top three fastest throws across the entire Contest belong to Mr. Peacock.

The top five highest averages further include Matt Bautch (UWP, 72.25), Nicholas Hazergian (SVSU, 72.00), Kris Kohler (CMU, 70), and Robert Cameron (PSU, 69.25). These contestants’ averages are a full 10 miles per hour faster than the average throw, and above the 68th percentile. 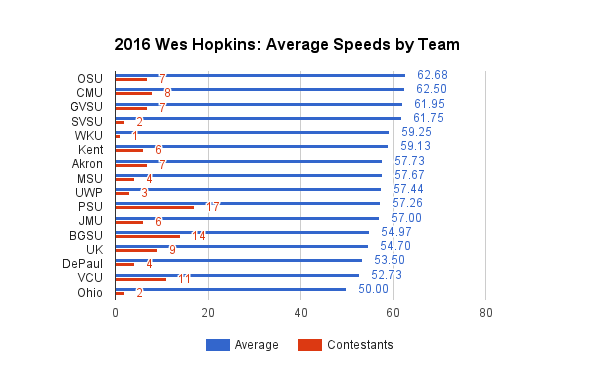 We recorded as small number of dodgeballers in a Women’s division, 8 contestants of the total 115 (6.957%).  Treanna Bidlack (BGSU, 52.00%) claims the fastest arm in the Women’s division.

We also logged a handful of Alumni (6), with Il Presidente claiming the top throw with an average of 61.50.

<reserved for future comments from the community>

What do you think?