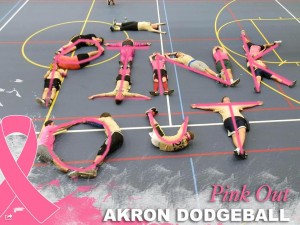 The University of Akron hosted the first annual Pink Out tournament over the weekend which had 3 teams attend. 3 of the 4 teams had roughly the same skill level, that being Akron OU and BW, and Kent State being the outlier. Baldwin Wallace came into the tournament ranked 14th, Akron ranked 15th, Ohio university ranked 16th and Kent state ranked 6th

The Zips started out rocky with a 3-0 loss against Kent state. The zips were able to slow the game and set the pace of the match. After a hard fought first point Kent was able to show their strength and win the opening point at 18:05. The second point started and the zips did not miss a beat taking control and cutting Kent down to two players. Unfortunately for the zips Kent was able to survive the fury of throws to go into the half with a 1-0 lead. After the half Kent was able to take control and beat the zips after scoring two more points in the second half to close off the zips. This was the best showing the zips have put forward against Kent in the five times they have played. In Akron’s second match against Baldwin Wallace, who came into the tournament with almost the exact power raking. Akron slowed the pace of the game and held ball control with a few key catches to pick BW apart. In the second point BW came with speed and took out the Zips in three minutes to even the score at 1-1. The zips upset by their play came back to finish the half at a score of 2-1. There were many key catches made in the game by standout rookie Cole Kraft to help the zips defeat BW 4-1.  After a break in the action all teams returned to begin the second half of the day. The Zips running off their big win against BW, managed to slow OU down despite their improved skills. The zips jumped out to a 3-0 lead into the half. In the second half OU began to make many key catches to earn their first point and finish the match 4-1. (Fourth matches last)

Rookie – Cole Kraft – “I liked the idea of a Pink Out tournament and cannot wait to continue in more tournaments as the season goes on.”

Despite starting the day strong and being projected to win all their matches on the day. Kent took out the zips 3-0 in a slow match to start the day. In their second match Kent flexed their muscles and beat OU by a score of 7-0. Kent then played BW, and had many close matches that they were able to hold on and beat BW 4-0. Kent has had trouble with keeping the pace set by their hard throwing vets for a whole match. As seen by BW in this match.

MVP/ Rookie – Clayton O’Dell -“I think the overall tournament went well. Our team played well but I think we rushed a little too much. I hope the Pink out comes back every year.”

BW came in to the match with a 1-2 record in their second tournament of the season. They are ridding off a good show at the BGSU tournament earlier this season. BW started the day winning 2 quick points against the OU and finishing up their opening match with a commanding 6-0 win. Their second match against the zips was the second time these two teams met and the first team BW scored a match point against at the ODC in the spring of 2015. After a few catches and great play from their captain Thomas Anthony (TJ) and Conner Rigsby, BW tied the match 1-1 in the first half. After a few bad throws BW almost took the match to a score of 2-2 when rookie CJ Houk stepped up his play. By the end Akron won the match 4-1. The most heated match of the day came between Kent and BW where the final score did not tell the story. Although the Flashes had emerged victorious with a commanding 4-0 victory, the struggle was real in every point that Kent had won. The passion that these two teams showed was inspiring. In almost every game that the yellowjackets played against the flashes should have been a victory, but they could not pull the trigger. Kent somehow managed to comeback from only having two players left in the matches each time to secure their seemingly dominant 4-0 victory, a tough loss for BW, but they should be proud of how they managed to control the games against the Flashes.

MVP – Conner Rigspy – “We saw quite a bit of improving from our team and we are ready to beat Kent State next time.”

Rookie – CJ Houk – “I really enjoyed the idea of a pink out tournament and I think we showed the league BW is ready to win more in the future.”

This pinked out ensemble came into this tournament as the youngest team, did however, manage to make a big mark in the pink out tournament and secure their first ever victory, but more on this later. Their first match was a valiant effort against BW and ended the match with a 0-6 loss. The first match showed much improvement from their first tournament at Bowling Green. Their next match against Kent State came to a close at 0-7, but had still played great, considering the inexperience of their players. After the break, the Bobcats took on the Zips, and Akron took a three point lead going into half. At the start of the second half, Akron took another point in the second half, but the real magic happened when the Bobcats caught a second wind from the Heavens, and beat the Zips, receiving their first ever victory. This was made possible by Captain Caleb Arnold making 3 or 4 key catches to secure a victory, well done OU.

MVP – Nate Sexauer – “I enjoyed playing the Ohio teams and it was great winning our first match.”

Rookie – Hannah Eberle – “This was my first tournament, we did not have a full team but I am very excited for the future.”

The last two matches of the Pink Out 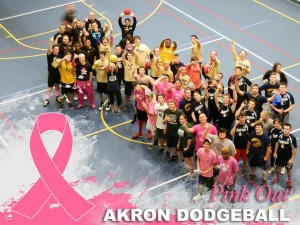 Tournament “DUN DUN DUUN,” after a long day of dodging balls, all four teams’ captains decided to do a ONE POINT SUDDEN DEATH MATCH where the loser had to concede the rest of the points. This one was for all the dodgeballs that were lost that fateful October Saturday. In the final match between the Yellowjackets and the Bobcats, OU showed signs of life when they held a 9-7 player advantage to BW, however with the Bobcats captain momentarily out of commission, they could not avoid the wave of Yellowjackets that overwhelmed them, succumbing to a one point loss.

(Queue the music and get Kent some tissues)

It was Akron versus Kent round two, each coming off of fresh victories, it was the final confrontation that rivaled the intensity of the Rebel Alliance taking on the Imperial forces. The scene was set, the crowd was hushed as if watching the opening scene of The Gladiator when Maximus Decimus Meridius dug his hands into the dirt, preparing for a battle for the ages, and it was. As Co-Captain Colby Briceland marched in front of his army, he prepared them for battle, chanting the inspiring words of Daniel Bryan, “YES! YES! YES!” the arena erupted with the sounds of inspiration. At the start of the match, Akron took quick control when they triumphed against captains Mitch Aldridge and TJ Keane, things were looking up for the Zips as they bombarded the flashes with missile-like throws that could only have come from the mythical arm of Zeus himself, Kent could not retaliate, for the Zips were Floating like a butterfly and stinging like a bee, however, Akron had succumbed to the fatigue and let loose some weak sauce throws and let Mitch and TJ back into the game. Then our own, Harry Potter, Joshua Lyons, let loose an Avada Kedavra killing curse of a throw, to quickly take out TJ. Then with only Mitch in the game, Joey $tack$ threw a billion dollar throw that would make Donald Trump resign on the Apprentice, that knocked down Mitch to secure an Akron victory and arguably the biggest upset off the season that would even make the late, great Patches O’Hoolihan tear up in his wheelchair.