END_OF_DOCUMENT_TOKEN_TO_BE_REPLACED

Since September 2019, the NCDA has been recognizing rookie players that make a statement on the court through their skills, leadership, and ability to mobilize a team. For the first time in NCDA history, there is a Women’s league, and this is the first month women are receiving their own individual spotlight. After a stellar performance at the Cornhusker Clash on October 8th, the first Women’s Rookie of the Month ever goes to Annie Larson from the University of Wisconsin – Platteville. Annie impressed teammates and spectators alike with game-changing catches, leadership skills, and overall dodgeball IQ. Caleb Newell took some time to interview this rising player; take a look at the interview below:

END_OF_DOCUMENT_TOKEN_TO_BE_REPLACED

PJ Antalek is September’s Baller of the Month! He is an Akron captain and member of the 2022 All-Ohio team. Nicole Cutich got the chance to interview PJ at practice, and they talked about players in the league, his pregame rituals, his iconic overtime hit against BGSU, how he apparently doesn’t know what a walk up song is and more. Congratulations PJ! 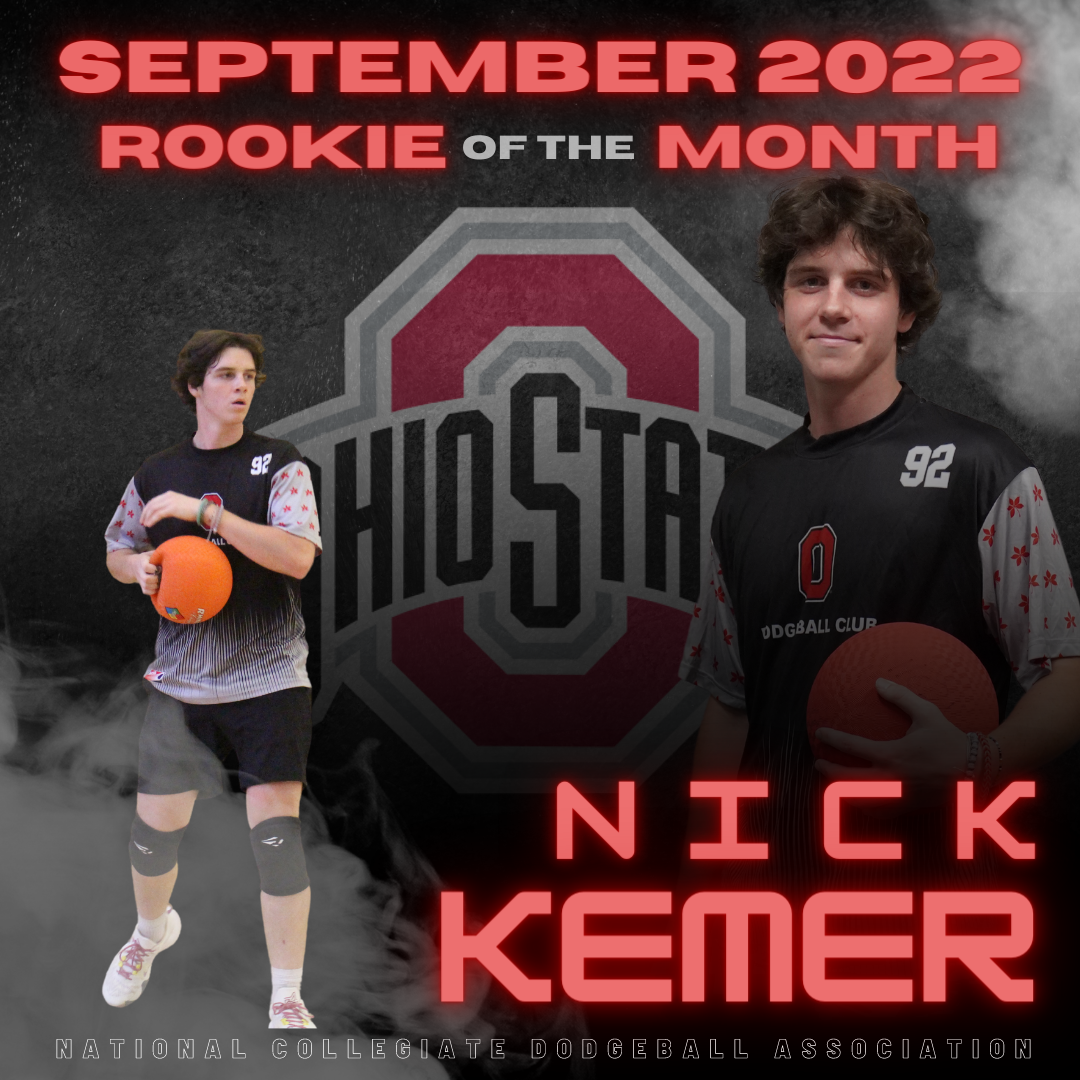 END_OF_DOCUMENT_TOKEN_TO_BE_REPLACED

The Baller of the Month for April is Dr. Peter Broe, founder and captain of the Western Michigan Broncos! Peter and the Broncos were our Nationals 2022 host team, and Peter was able to put together an excellent event despite short notice. Watch and listen as we ask Peter a wide variety of questions about his lengthy career, what it was like starting the club, and more.

I had a chance to sit down with Cole Machiela of Saginaw Valley State University who was selected as April’s Rookie of the Month.

Cole is a Freshman studying Spanish and Business Management at Saginaw Valley State University. He was a standout player who played a key role in the Cardinals’ offense and led the team as an Assistant Captain. Going forward, expect Machiela to continue to be household name within the realm of college dodgeball.

END_OF_DOCUMENT_TOKEN_TO_BE_REPLACED

I had a chance to sit down with Terence Checkett of Ohio University who was the Rookie of the Month winner for March.

Terence is a Freshman studying Political Science at Ohio University. He made a splash this year on one of the youngest teams in the NCDA and was a standout player who played a key role in the Bobcat’s offense. Going forward, expect Checkett to continue to be household name within the realm of college dodgeball.

END_OF_DOCUMENT_TOKEN_TO_BE_REPLACED

Rebecca Shappell: I had the chance to sit down with February Rookie of the Month, Jon Crockett, to hear what he had to say over an incredible Michigan Dodgeball Cup performance to help Michigan State secure their first MDC title in 17 years!

Crockett is a freshman studying Mechanical Engineering at Michigan State. Prior to college, he played baseball but found club dodgeball at MSU’s fall recruitment event, Sparticipation. Crockett quickly developed into a strong rookie player for the Spartans by showing off his arm early. While he had a little bit of a quiet start to the fall semester, he burst onto the scene in spring with a stellar MDC performance, notching several catches, huge hits and great transitional play. He quickly showed that he is an integral piece to an already powerful Spartan offense.

Crockett may show off a powerful throw but what has quickly catapulted him into the top of MSU’s rotation is his hands. He is always looking for catches and made multiple clutch plays to swing momentum at key points in the Spartans championship match against GV. His versatility in how he moves on the court allowed him to capitalize on stray throws and catch teams off guard. Crockett worked his way into a stacked Michigan State OT-6 roster and wound up making two huge catches to help seal the victory at MDC.

We look forward to seeing Crockett improve throughout his college career. Expect him to be a household name for the Spartans as he becomes an upper class-man. Congratulations on the achievement, Jon!

The Baller of the Month for February is Cory Heitmann, Assistant Captain of the Cincinnati Bearcats! Helping lead the Bearcats to an undefeated 6-0 record and the Ohio Dodgeball Cup in the month of February, Cory answers some hard hitting questions, and gives a look ahead for UC at Nationals.

Robyn MacDonald, President of the University of Nebraska-Lincoln is your November Baller of the Month! Click on the video link below to hear her thoughts on winning the award.

END_OF_DOCUMENT_TOKEN_TO_BE_REPLACED

Christian Iannuzzelli, President and Head Captain of Penn State University is your October Baller of Month! To watch his interview, click on the link below:

This month, we will be getting back to current players as the Baller of the Month, and this months winner is well deserving of the distinction. Dylan Greer, captain and president of THE Ohio State Dodgeball Club has brought the Buckeyes back from obscurity, to be named as this years “Dark Horse” pick to win the National Championship. Dylan had a lot to say, so lets get to the interview!

The University of Cincinnati Dodgeball Club has been on a steady rise this season, and a large part of that is thanks to October 2019 Baller of the Month, Brett Liming. During October, Brett helped lead the 2nd year club to a 4-2 record, which included Gonzalez upset wins over CSU, SIUE, and Kent State. As a Sophomore, Liming has learned the game very quickly, and will continue to be a force for years to come. I had a chance to catch up with him and get his thoughts on winning.