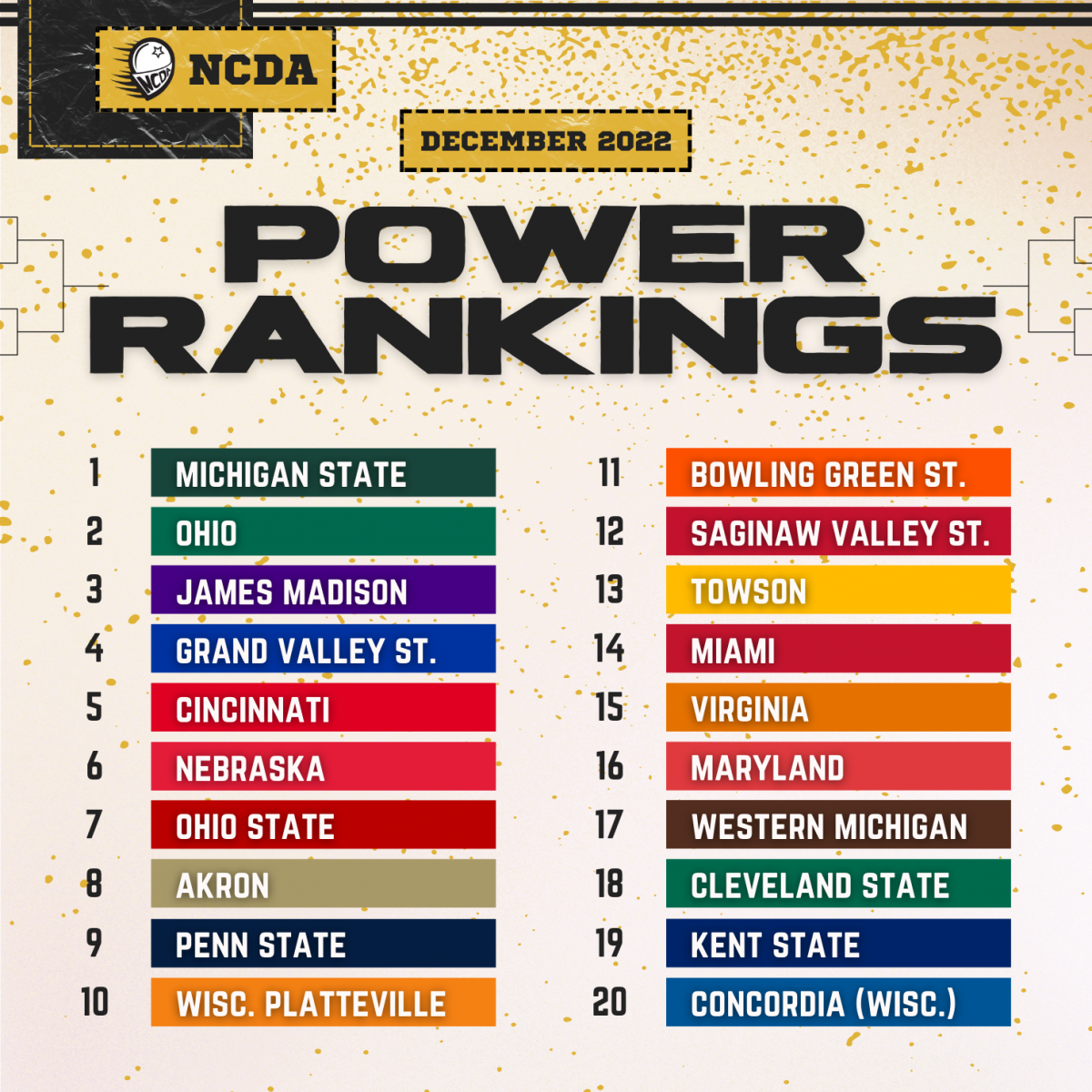 1) Michigan State – While their last match was over two months ago, the Spartans have put in a lot of work on their own time and hope to finish the fall semester just as strong as they started. Michigan State heads into the weekend with three big matchups at the Dr. Peter Broe Classic and looks to prove just why they are the unanimous #1 among the power rankings. Between the triple headed All-American offensive threat of Jack Girling, Barry Butler and Alec Deen coupled with a well-versed defensive core, MSU seems incredibly solid on paper. The real test will come down to rookie development. It comes as no surprise that the Spartans have recruited well, but their top rookies in Nick Fedewa, Matt Barriball and Zach Van Fleet will be paving the way and look to shine in key roles this weekend. If they continue to develop, you can expect these three to become new household names in the NCDA.

END_OF_DOCUMENT_TOKEN_TO_BE_REPLACED 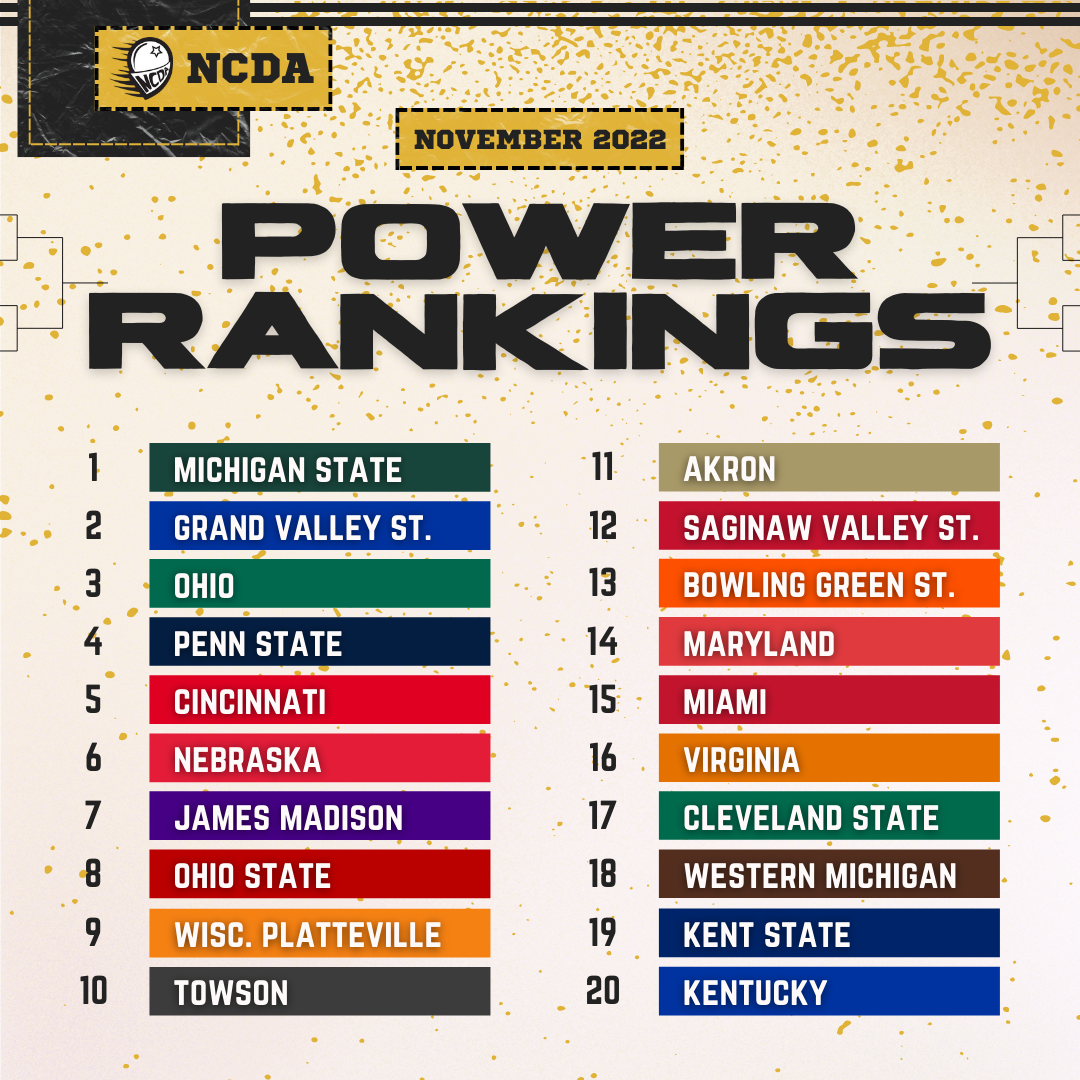 1) Michigan State – The Spartans starting off the season strong was something few doubted. October ended with a convincing 3-0 record against Ohio, Cincinnati and Cleveland State. The triple-headed offensive threat of #2 All American Jack Girling, #6 All American Barry Butler III and ROY Alec Deen showed that they can be an unstoppable force. Girling and Butler III proved early that they deserve consideration for MVP candidacy and have a great communication front in Captain Josh Kramer and Assistant Captain DQ McClean. MSU has recruited well, yet again, and have another strong rookie class including a ROY front-runner candidate in Nick Fedewa and dark horses Matt Barriball and Zac VanFleet. Their rookies proved that they’ve learned strategy early and can further help round-out this powerhouse program. Roster depth and player development will be key if the Spartans look to take home a National Title come April. One has to wonder if the Spartans will let early victories get the best of them to take their foot off of the gas or if they’ll continue to push themselves through the season?

END_OF_DOCUMENT_TOKEN_TO_BE_REPLACED 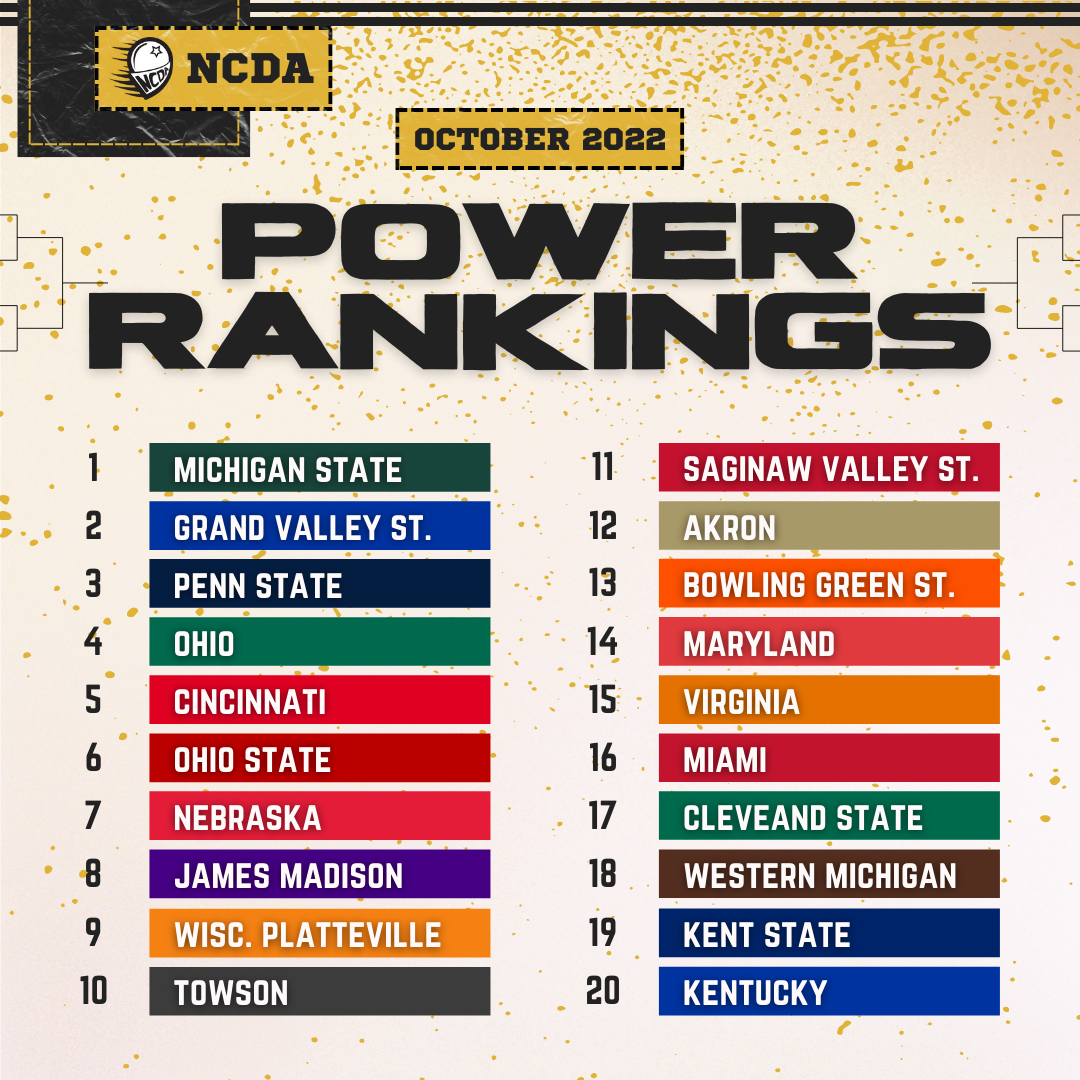 1) Michigan State – Textbook start to the year for the Spartans. MSU travelled to JBBBIII and went undefeated with convincing wins over two top 5 programs (Cincinnati and Ohio). Pretty solid resume if you ask us. Michigan State proved to everyone they are in the title conversation. With plenty of veterans on the roster paired with some young talent, this feels like a team that will progress quite a bit this year while maintaining more consistency than MSU teams of the past. So when can we expect that first GVSU vs. MSU matchup?

END_OF_DOCUMENT_TOKEN_TO_BE_REPLACED

1) Grand Valley State- Back on top for the… *checks notes* 11th time, the Lakers once again saved their best for last this season. In a year (especially Day 1 of Nationals), where the league seemed more wide open than ever, of course the Lakers ripped through everyone in bracket play (by a combined 20-4 score) to win the title. Ben Smart was sensational on Sunday of Nationals, Josh Hill’s cannon arm was on full display (per usual), quite honestly the entire team put it together when it mattered most. The unsung heroes of this season might be the GVSU rookie class, led by Matt Budai and Ryan Paddock. Don’t look now, but GVSU only loses a few starters, so this might be the start of another title streak for the Lakers.

END_OF_DOCUMENT_TOKEN_TO_BE_REPLACED 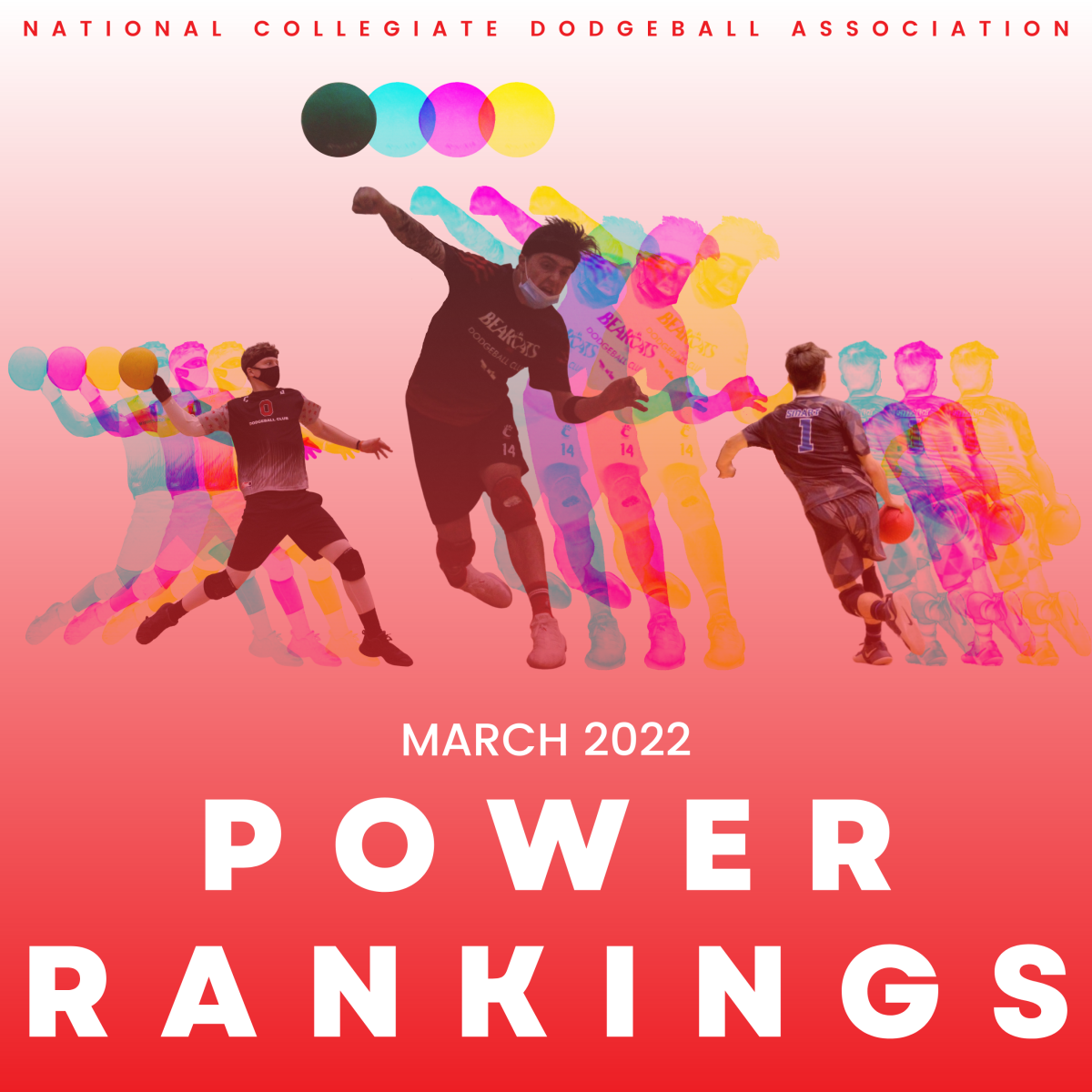 1) Cincinnati – The Bearcats climb back to the top of our Power Rankings for March, after sitting at 2nd for two straight months. In February, the Bearcats took home the Ohio Dodgeball Cup and dismantled SVSU, Towson, and Cleveland State at their appearance at The War V. This team is one of the deepest teams in the league, and seem poised to make a deep run Sunday at Nationals. One stop left for the Bearcats before Nationals, however, as they host the Clifton Heights Classic on March 26th. Will they be able to close out the regular season sitting atop the Power Rankings and Gonzalez Standings? We shall see, as there appears to be an upstart Bobcats team from Athens, Ohio who may have something to say about that. 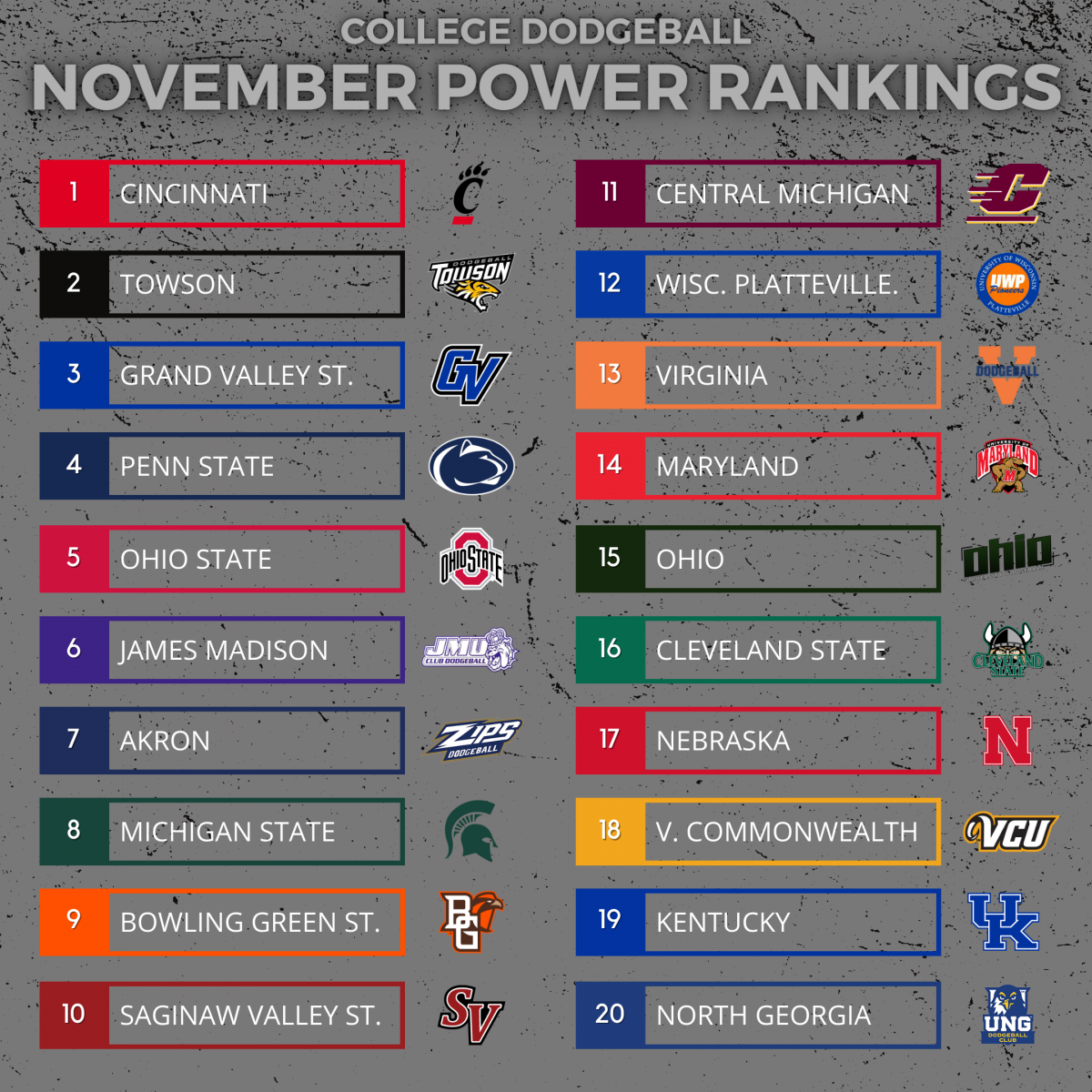 END_OF_DOCUMENT_TOKEN_TO_BE_REPLACED

GVSU looks to continue their winning ways in the 2021-2022 season. The Lakers return plenty of familiar faces, including 2020 Player of the Year Ben Smart, former captain Josh Hill, and assistant captain Nick Hehl. These three all have big game experience and know how to lead their team to success. Tyler Peach is the new name to know from this team. He takes the team over this year as head captain. As a freshman the year COVID hit, he only has half a year of game experience. What he lacks in experience though he more than makes up for in talent, so expect this guy to just keep getting better. GVSU was limited to practice only last season but still managed to bring in a few promising recruits. Among them is Owen Israels, who already looks to have the composure of a veteran despite not playing in a match yet. For those hoping GV would finally have a down year, looks like that’s going to have to wait.

END_OF_DOCUMENT_TOKEN_TO_BE_REPLACED

Grand Valley opens yet another season as the predicted top team in college dodgeball. After going undefeated in 2019-20 prior to the Covid-19 shutdown, GVSU comes into the 2021 season with a handful of star players on the roster. The Lakers return 2019-20 NCDA Player of the Year Ben Smart, along with fellow All-American Nolan Stanko. On top of that, Captain Josh Hill is back for his second year at the helm. Collin Freeman is back (for potentially just the fall semester), along with Nick Hehl. Not to mention, GVSU had two All-Rookie performers a year ago, who are poised for a strong sophomore campaign: Tyler Peach and Thomas Williamson. GVSU will need to do a good job recruiting this year to keep the depth that has always made them so dangerous, but overall they have the experience and talent at the top to once again be in the title conversation.

END_OF_DOCUMENT_TOKEN_TO_BE_REPLACED

With only a few months left in the 2019-20 season, the rankings continue to shift. The months of January and February saw some very entertaining dodgeball to say the least, with some teams finding themselves on hot streaks, with others falling into a slump. With Nationals quickly approaching, it will be fun to see how the rest of the regular season shakes out!

Below is the official March Power Rankings list, voted on and written by the NCDA Content Team.  Please keep in mind: these power rankings have no impact on the actual NCDA Standings.

Grand Valley remains undefeated after some very close calls so far this winter. The Lakers have been forced to overtime each of the past two times they’ve faced Michigan State. GVSU also had some first half struggles at the Michigan Dodgeball Cup against Central Michigan. The best GVSU teams over the years haven’t been simply their most talented or most skilled squads, but rather the most disciplined ones. If GVSU plans to be the first team since 2009 to go undefeated for an entire season, they will need to lock in over the next month and a half and get back to being the most disciplined team in dodgeball.

END_OF_DOCUMENT_TOKEN_TO_BE_REPLACED

We have reached the midway point in the 2019-20 NCDA season. There have been some surprising upsets so far this year, with some teams performing differently than expected preseason. With still four months until NCDA Nationals 2020, teams continue to shuffle in the power rankings order, as we get a better grasp at who are the contenders and who are the pretenders.

Below is the official December Power Rankings list, voted on and written by the NCDA Content Team.  Please keep in mind: these power rankings have no impact on the actual NCDA Standings.

For the second consecutive fall semester, the Lakers finish undefeated. GVSU is once again a title contender, proving their abilities against many of the top teams in the country. Grand Valley has several players who should be considered in the MVP hunt, most notably Ben Smart and Nolan Stanko. It’s never a bad thing to have several players in that discussion. The the biggest bright spot for GVSU though, is the way Captain Josh Hill and the other leaders have been able to develop the talented depth on this roster. GVSU is a much deeper team than some may have expected them to be after how may contributors they lost from a year ago. This team looks poised to start a new title streak this spring.

END_OF_DOCUMENT_TOKEN_TO_BE_REPLACED

The 2019-20 season already has seen quite a few shakeups in the first two months. With so many upsets and chaotic results, ranking teams based off of the results so far this year has been difficult to say the least. Here’s to hoping the month of November provides a bit more clarity!

Below is the official November Power Rankings list, voted on and written by the NCDA Content Team.  Please keep in mind: these power rankings have no impact on the actual NCDA Standings.

END_OF_DOCUMENT_TOKEN_TO_BE_REPLACED

What an incredible first month to the season. 31 games have been played so far this year, with over 1/3rd of them being upsets! If the month of September was any indication, it’s going to be a FUN season of college dodgeball!

Below is the official October Power Rankings list, voted on and written by the NCDA Content Team.  Please keep in mind: these power rankings have no impact on the actual NCDA Standings.