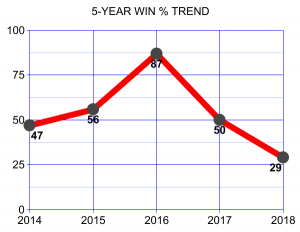 Jacob Hulbert (after the first semester)

Season Preview: Ohio State Dodgeball has certainly had its ups and downs over the years.  The program that won the first two NCDA National Titles has yet to earn that distinction since.  After years of underachieving, the Buckeyes had a great run in 2016, making the Final Four and finishing with an 87% win percentage.  Since then it has been a massive regression in Columbus, but that could all change this year. OSU is stocked with some very promising young talent that could get them headed back in the right direction.

The Good News: Ben Johnson and Dylan Greer are the two main headliners on this roster, and they both have improved significantly this offseason thanks to their participation in Elite Dodgeball.  I’ve also been given a guarantee by Greer that OSU has the 2019 rookie of the year on their roster. A strong recruiting class could get this team back on track quicker than many anticipated.

The Bad News: Jeff Starr will no longer be patrolling the sidelines for the Buckeyes.  His experience as an NCDAer will certainly be missed. Ohio State needs new vocal leaders to emerge if they are planning to be a cohesive group this year.

Our Call: Ohio State will certainly be an improved team top to bottom in 2018-19.  Do they have the talent and experience to compete with the top tier in the Ohio Region?  As of right now we will say no, but it isn’t completely out of reach. The fall semester will be very pivotal for this group.