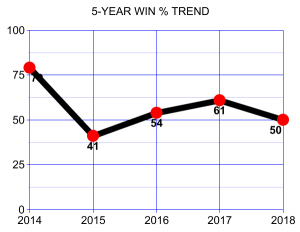 Ryan Anguilm (A)
Kyle Bruce (A)

Season Preview: This team has some serious potential.  There’s a reason I personally have them in my top 3 in the country entering the year.  SVSU enters the 2018-19 season ready to prove doubters wrong once again. The Cardinals have made two-consecutive Final Fours, and this year’s roster has me convinced they will make it three.

The Good News: SVSU returns a staggering 19 of their top 21 players from a year ago.  That’s big news for an team, especially one that was already good enough to make the Final Four.  Dylan McDonald and Ryan Anguilm are two of the more underrated players in the country. Kenny Mize and Kyle Bruce are both top notch catchers who will provide steady leadership for SVSU this year.

The Bad News: A couple legends graduated last year for the Cardinals.  No longer will we see Cody Putnam and Nick Hazergian making plays for SVSU.  Will the Cardinals be able to generate enough offense to replace these two stars?

Our Call: All in all, SVSU is more well-equipped to be a top team this year than they were a year ago (despite the loss of Putnam and Hazergian).  This team top to bottom will be more experienced and balanced than a year ago. Expect them to be in the National Title conversation come April.