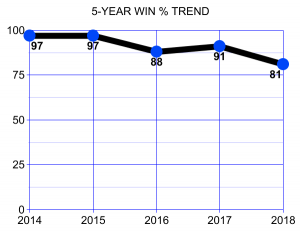 Season Preview: Grand Valley State University has had quite the run over the past decade.  The undisputed kings of college dodgeball, the Lakers have won 10 of the last 12 national titles, including their current streak of 6-consecutive.  It is a no-brainer that this group should be ranked #1 heading into the season, as they have proven to be a model of consistency over the years, improving dramatically over the course of the season to finish the year as national champs.

The Good News: It’s pretty scary to think that the team that dominated CMU en route to a 6-1 victory in last year’s National Title Game will only lose 2 starters from that roster.  Nearly all of the Lakers’ contributors are back for another year, including 2018 1st-Team All Americans Brandon Meisel and Aaron Krafft, and 2nd-Team All Americans Sam Stockdale, Alex Jonauskas, and Ben Smart.  It’s difficult to see many teams standing a chance against this talented and experienced group.

The Bad News: Not much bad news to speak of for GVSU heading into the 2018-19 season.  Sam Stockdale will be studying abroad in the fall, so they will be without him for the first few months of the season.  James Reyes returns this season, but will still be recovering from knee surgery during the fall semester. Beyond that, the only real issue we can see is GVSU’s lack of depth on the back end of their roster.  The Lakers have enough for a rock solid starting 12, but they would benefit greatly from a strong recruiting class this fall. The title streak will end after this season unless they can recruit a large and talented group of rookies.

Our Call: All signs point towards GVSU winning their 7th-consecutive title in 2019.  It really is an embarrassment of riches for GVSU entering the season. Meisel will begin the year as the favorite to win College Dodgeball MVP, with Krafft right behind him in the running.  Beyond those two players, there isn’t much of a drop off, as plenty of other Lakers will be in the hunt for 1st or 2nd Team All American spots this season including the return of 79 mph thrower Ray Franklin.  Overall, GVSU at #1 is an easy pick. The Lakers are poised for another season at the top of the college dodgeball world.