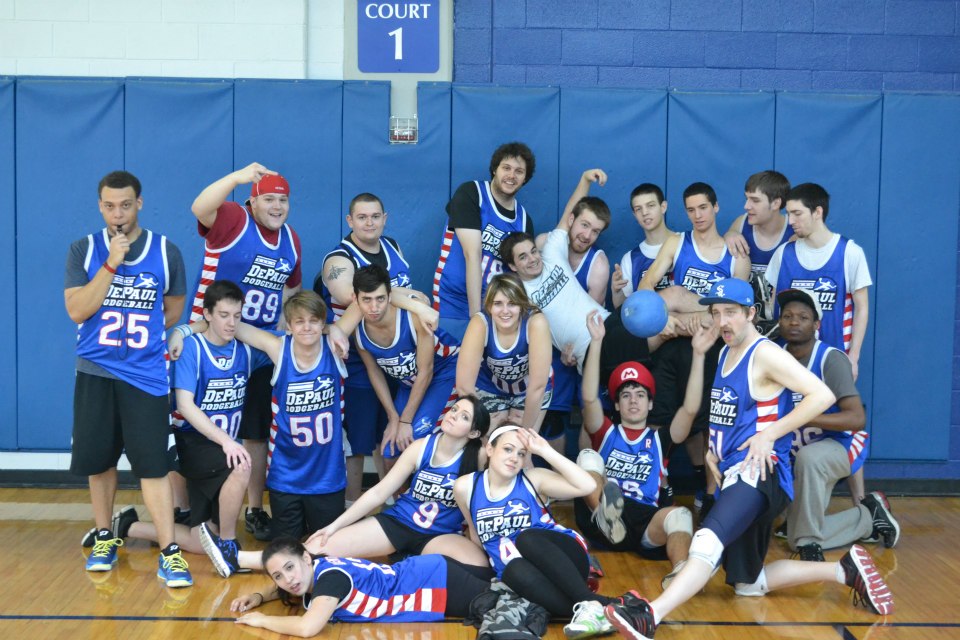 To start the 2012-2013 season, DePaul played Moody Bible Institute on Sept 7th, 2012. It was a fun match as DePaul was able to claim the win to start the season 1-0. We would later play Moody again in October but this time, our cross town rival beat us evening our series to one a piece.

Finally the first tournament of the season would be in Michigan for the MSU Invite. We were able to bring a lot of new faces on our team for this trip; and they all agreed it was excellent weekend with lots of fun. Our first match was against Kent State, which ended up being a win for them. BGSU would be the next opponent we faced and again the other team took the victory. The last match for the tournament was MSU, where most of our new players took part in that. With crazy dodgeball action, MSU took the win but DePaul suffered a big injury. A new player, Paige Peterson, separated her shoulder during the last point. She was taken to the hospital and made a fast recovery to join the team again in January. As always, the MSU Invite was a fun tournament as DePaul still remained undefeated.

The  next set of games for DePaul would be at the Chicago Dodgeball Open (CDO). We were able to bring far away teams such as Nebraska-Lincoln and JMU to Chicago to have an awesome tournament. DePaul would beat Nebraska-Lincoln to start their home tournament, and would later face JMU and GVSU. JMU turned out to be a vivacious match as each of the games were close. JMU would take the win for the first time playing DePaul. Grand Valley was the next match and like always, exuberant fast-paced dodgeball was played. GVSU would take the win; winning all their matches during the CDO, just like DePaul.

DePaul would try to attend the Ohio Dodgeball Cup, but because of funding issues with our school, we couldn’t make the trip. DePaul would host another home tournament, the DePaul University Invite (DUI). University of Kentucky, UWP and Moody attended the DUI, but each team would only play two matches because of court scheduled time. DePaul vs UWP was our first match and once again DePaul suffered another injury. Mario “Mario Mario” Romanelli dislocated his finger and had to leave the tournament. He was able t join the team again before Nationals. UWP proved to be a power armed team as they won our match. Kentucky would do the same as they beat us with only 11 guys. DePaul lose the two matches but walked off the court undefeated.

Before Nationals started, DePaul played one more match with Moody, to settle our series. DePaul claimed the victory winning the cross-town dodgeball series with their compatriots, the Moody Archers.

The trip to Nationals in Kentucky was next for DePaul and they started with an early wake-up call against WKU. With balls being thrown everywhere, WKU took the close win (6-3). But DePaul did win a one-on-one gladiator in the match, as Rachel Joyce got the kill for a DePaul win. The next match was DePaul vs SVSU, where Saginaw played hard and fast to win the match (6-2). But once again DePaul won another one-on-one gladiator match, as this time “Mario Mario” got a face shot kill to take the win. The last match for Day 1 was against Ohio State for DePaul. When DePaul played fast, they were taking control but Ohio State slowed down their play to counter act the fast-paced dodgeball. Another one-on-one gladiator was declared, but an unknown Buckeye defeated Matthew “Howitzer” Schroeder in center court. OSU would take the win (I think 4-1).  For Day 2 of Nationals DePaul would qualified as the #14 seed, facing the #3 seed JMU. For a fourth time at Nationals, DePaul faced a one-on-one, as leader Troy “Big Dix” Dixon got the kill. JMU would win the match (5-1) but not before playing some dodgeball shenanigans with DePaul (as well as red rover, but DePaul player William “GIGANTOR” Guenetee messed it up by running around the JMU squad).