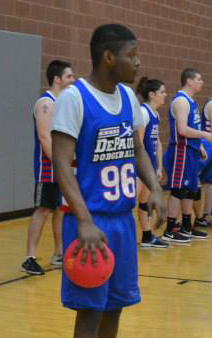 For this new year of 2015, we take the time recognize some of the Alumni of the NCDA. This Baller of the Month is Vanswa, a DePaul alum and a Senior Developer actively producing a couple of projects the development team is engaged in.

Zigmas: Can you explain some of your thoughts behind joining the NCDA staff as a developer?

Vanswa: I joined the NCDA development side because I enjoyed playing dodgeball in my college. I saw that there were areas that were lacking which could make the organization better. I just wanted to do my part to keep the organization running by using my skill set.

Zigmas: Where do you see the NCDA in the next two years, in developmental pursuits?

Vanswa: Over the next two years, while I am always ambitious and thinking ahead, right now any plans forth coming will be slow. I see progress, but much like many other areas of the organization, without help from those that participate in it. I will continue to contribute, despite other obligations, going forward to make sure more parts of the NCDA are brought update (from a technical standpoint)

Zigmas: As this is part of our Alumni appreciation period in the NCDA, what have you been doing since your graduation last year?

Vanswa: Since I graduated I have participated in other leagues in Chicago . I also hope to come back as a coach for DePaul’s club in the upcoming months. Although, now graduated with a full time Job it is becoming increasingly difficult to factor in Dodgeball.

Zigmas: Has the NCDA helped you in the later career?

Vanswa: Being able to help the NCDA in technical developments have helped me out a lot in my career as other employers like to see candidates who volunteer their skill sets to help out as well as a drive to learn more through doing so.

Zigmas: Any plans for attending Nationals this year?

Vanswa: I hope to attend Nationals this year. I joked to Zigmas last year that I would like to come back to be the right hand man and enforcer at the tournament.