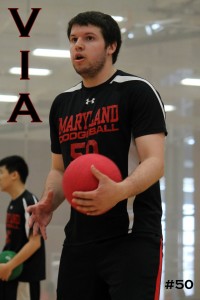 November’s Baller of the Month is Maryland’s Steve Via. Via has been an integral of Maryland’s recent success, helping them to a stellar 6-3 record in the fall. With clutch catches, solid blocking skills, and emotional leadership, Steve has elevated his level of play to help his team in whatever capacity they need. While he is not the highest profile player on UMDs team, he is certainly making a name for himself as the year progresses. I got a chance to talk to Steve recently and pick his brain about a few topics.

SS: so you’re officially the 2nd ever BOTM from UMD, the first being your older brother Chris, how’s it feel to bring some more recognition to UMD and to follow up on what he did?

SV: It feels great, I was really honored to get this achievement. I think this type of thing will let other schools know that UMD does have a really good team and that we can compete with the best of teams. It was awesome that Chris got this when he started the club and than once he left I did my best to try to help expand the club and move it in the right direction

SS: Were you guys ever on the team together?

SV: Yeah, he is 2 years ahead of me. So the first year of the club he was a junior and I was a freshman. So we got to play together for 2 years.

SS: How was it playing with an older brother and then taking over for him in a sense in conjunction with your other head guys? Especially with you being a part of the first team from UMD that made it to Nationals after he had graduated?

SV: It was a lot of fun, we would always talk about strategy and ways I could improve. He wanted the best for me and the club so he was always trying to help out as best as he could. I think me and the rest of the offers noticed that and try to run the club the same way he did. His goal was always to go to nationals but since he was never able to he was sort of able to live that experience through me

SS: Awesome, well since we’re on Nationals, how was your first experience at Nationals? For you as an individual and with your team?

SV: It was great. Probably my favorite dodgeball experience so far. Watching and playing against all of these different teams was really cool. It brought the team a lot closer together and before we may have just been teammates but after that we all think of each other as brothers

SS: moving to you as an indiviual player, you’ve been known for making clutch catches when your team seems to need them the most, but most people don’t notice the other parts of your game. How would you describe yourself as a player?

SV: I am definitely a catcher. I am typically one to try to hold the line and block. Although I have been throwing a little more this year, my arm strength is no wear near as strong as some of the other guys on the team. But my throws are accurate and low to the ground, so when I do get people out by throwing the ball it will usually be at their legs or feet where the opposing player cant catch it.

SS: now that UMD has seen more teams in the league than ever before, how far do you think your team could go this year?

SV: I think when we play smart and together we can beat anyone. I think UMD can be a final four team if we can continue to work together and play hard. I have confidence in everyone of the starters and we are begging to build some really good depth too.

SS: alright, and one last question that I always do just for fun: celebrity crush then (childhood) and now?

SV: have to say the pink power ranger (than) and Natalie portman now.

Having played against Steve a bunch of times I can definitely say it’s been fun playing him for the last four years. As a player on an opposing team, playing against him can get frustrating at times as he makes a lot of momentum shifting catches that can really change the end result of a point an maybe even a match. As just a general dodgeball player, I love going against guys like Steve as he definitely brings his own flare to the court and knows how to make things interesting.