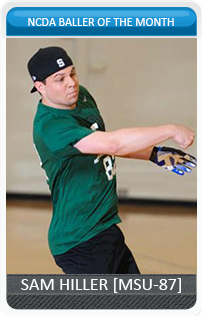 The April Baller of the Month is one of the more specialized awards out of the year. Because we choose the BOTM in the middle of the month, it usually falls after Nationals, and thus there is usually a great story behind it.

This April, we celebrate the NCDA’s own Chief of Content, Sam Hiller. The sheer amount of writing this man has done for the NCDA over the past year is enough to warrant the award… but a very special icing on the cake involves MSU making it to the Championship.

MSU, one of the founding Member Teams of the NCDA, has never made the National Championship in the team’s 10 year history. The MSU program has had its ups and downs over the years, overshadowed by dominating Grand Valley in the early years and often outplayed by regional powerhouses Central Michigan and Saginaw Valley. That doesn’t say Michigan State is a bad team; they keep it competitive with the rest of the Michigan schools, and they have proven time and time again they are able to handle teams outside the state of Michigan. Maybe it was Sam’s institution of the Team Sit policy between halftimes. But the story of MSU’s ride to the Finals is a great epic that has already been written by his truly.

But this League isn’t solely defined by the Champions. There are hundreds of collegiate student athletes that define the play and come together for some good fun times, there are many dedicated players and alumni that make the League stronger in hundreds of different ways. The website (and the Podcast) would not be the content rich entity it is without Sam’s help and direction.

Sam finished off the season, and the end to his captaincy, on the dodgeball court, in the last few minutes of the Championship game. While each Captain has his or her own memory of the last minutes of their college-defining career, Hiller’s instance has to be one of the better options of the lot. And now I’ll sign off with an interview with the man himself:

Zigmas Maloni: Tell me your thoughts on the final match, and the road getting there through Nationals.

Sam Hiller: The road getting to the Finals was tough. Our first game of the day was against a very strong UWP team that we foolishly underestimated. Everyone was looking forward to the SVSU game that we didn’t realize that UWP was a very solid team. With a lot of power throwers they looked like they could take us, and when the final whistle blew, we only had two people left on the court in a 2-1 win. After that was a rematch of last year’s quarterfinals with SVSU, one of our biggest rivals in the NCDA. Despite dropping that first point, we remained confident, and when we got up to a 2-1 lead and a 5-3 man advantage, I realized we were going to win. I made the biggest play of my career and got a big catch on one of SV’s best throwers, and Mike Van Ermen was able to finish off the Cards as we got what I considered the most emotional win I’ve ever had in dodgeball.

Our next opponent was Kent, and I had probably my best game as a player (5 catches, 3 in 2 minutes, and 0 outs) and we played probably our best ball of the season. That brought us to the championship game, where we faced off against GVSU, a team we’d never beaten. They simply outmatched us, and our injuries/lack of depth/lack of power arms really hit us in the title game. It’s funny though, because that was the worst game I’ve ever played (0 kills, 0 catches, hit in the face by Kenny Bacchus) but yet it was probably my favorite game. We didn’t have a match for Kevin Bailey, but yet we still all had a good fun game. In the last point, we were down 3-0 and I knew that our time was up, and my time specifically, and I started getting emotional. Mark Trippiedi, the great guy he is, was nice enough to let us stack the outline so I could be on the court for the end of my career. It was a truly great gesture.

Overall we made a miraculous journey, and even though the bracket lined up the way we hoped it would, we still had to play our butts off to get to the title. Nobody on our team had a rough tournament, and I am extremely proud of what we accomplished.

ZM: Name one instance, that isn’t covered in the above, that you’d like to highlight as one of your favorite parts about Nationals 2013.

SH: One of my favorite parts of Nationals is seeing all the people you don’t get to see that often, whether it’s alumni like McCarthy, Bomis, and Raymer, or players on other teams, its great to get to spend time with people I consider good friends.

ZM: You’ve done some major work over the past year for the League as Chief of Content, many great hours put in. Single out your favorite article, or even an individual podcast.

ZM: Anything else you’d like to say or highlight?

SH: I just wanna say thanks again for everyone throughout the league, I truly like all of you! Thank you!