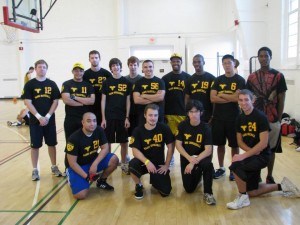 Before VCU began their first season in the NCDA, VCU played their first ever match against JMU in the spring of 2012. The Rams played 10 v. 15 losing to the Dukes with an unrecorded score. After taking the summer off, VCU got ready for their big entrance into the NCDA.

The VCU Rams entered their first season in the NCDA not knowing what to expect. Much like Towson and University of Maryland, their first season wasn’t very spectacular. Their first tournament was the UMD Round Robin. In their first match the Rams lost to Towson 12-0. In their next three games VCU lost to Kent State 7-0, JMU 9-2, and UMD 6-1. At the end of the day the Rams went home knowing they had lost all their matches, but made a steady amount of improvement from match to match.

Their next match was in the Battle for Virginia falling to JMU 12-0 to end their first semester in the NCDA. VCU came back in the spring semester returning to College Park to face UMD and Towson. Both the Tigers and the Terrapins downed the Rams 6-0. The two bright spots in these losses were that they did not lose in as high of volume as they had previously, and they made the games much closer putting a scare into both teams at one point.

VCU ended their season travelling to Harrisonburg, VA home of the JMU Dukes to participate in BEAST II. Here the Rams lost to Miami (OH) 5-1, Towson 6-0, Western Kentucky 5-1 and Kent State 4-0. Though they lost all their matches on the day, the vast improvement the Rams had made from the start of their season to the end of BEAST II.

Going through a season of tough times, the VCU rams finished their inaugural season in the NCDA going 0-11. Behind the leadership of Shadeed Drakeford, the Rams made great leaps and bounds from the start of the season to the end. With Shadeed stepping down as captain at the end of the year the Rams have a few concerns for next year. First, where will their recruits come from? Second, who is going to step up and take over as captain next year? Will the team learn how to pinch the right way to aid their throwing? Finally, with guys like Michael “Spiderman” Tse and Andrew “Snipes” Williams graduating, where will their talent come from next year?

Next year holds a lot of questions and a lot of potential for VCU.