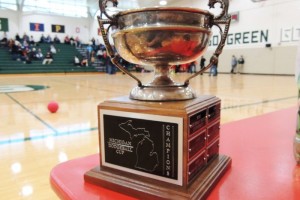 Ask any dodgeball team in Michigan what their #1 goal is for the season and they will say win a national championship. Goal 1B is to win the Michigan Dodgeball Cup. Currently, as far as I know, there are only two trophies in the NCDA, and they correspond with both of the previously mentioned tournaments. The MDC means more to the state of Michigan than any other tournament does to any other team in the league (perhaps biased but I think most would agree to that claim). So for the final MDC preview article I am going to look at what taking home the Michigan Dodgeball Cup would mean to each of the four teams.

Also, many believe that the winner of the MDC is the favorite to win the national championship. However, only 3 of the last 6 times and 6 of 11 overall has the MDC champion gone on to win Nationals. I don’t think anyone would be surprised if this year no Michigan team holds both trophies at year’s end.

Going in reverse order of the standings:

SVSU has won the MDC twice, which is second only to Grand Valley for tournament victories. The first time they won the tournament, they went on to win Nationals in 2012. They defeated GVSU both in the MDC and in the semifinals at Nationals (which many refer to as the de facto championship match), handing the Lakers 2 of their 4 losses that season. The next time they won, in 2014, they handed GVSU their only loss of the season. SVSU would end up losing to GVSU in the national championship. Both of those MDC winning teams were comprised of primarily the same players. The remnants of those teams are almost all gone from the squad SVSU will bring to East Lansing on Saturday. Cody Putnam, Andrew Miller, and Kyle Foster are looking to bridge the gap from those championship teams to a new generation of SVSU dominance. They are the only current non-GVSU players to have lifted the cup in celebration, and I know they will be looking to recreate that feeling this weekend. Although this season has perhaps had more downs than ups for the Cardinals, a victory in the Michigan Dodgeball Cup would signify a return to dominance for SVSU.

There is something in the mindset of MSU when it comes to athletics. In seemingly every sport, the common talk about the Spartans is that they are good not great. In basketball, no one is surprised if Izzo leads his team to the Final Four, but most believe that is where the journey will end. In football, Dantonio has built a solid program, but they will always be looking up at Urban Meyer and that guy who wears khakis, in addition to them boys from SEC country. In dodgeball, they are always a contender, but GVSU, CMU, and SVSU are the ones who have won championships. These types of commentary further the “chip on the shoulder” mentality of Michigan State that is prevalent across all sports. In regards to dodgeball, there were many who thought MSU would never be able to beat Grand Valley. They have done that twice this season. There were many who believed MSU falters at the first sign of trouble. State has come back from 1 on 13 and 2 on 12 deficits this season. There are many who say as soon as I get out, the team falls apart. Some of our biggest performances this season have come with me on the sideline. All of these commentaries on MSU were very justified based on past seasons. We used to get killed by Grand Valley. We used to grasp defeat from the jaws of victory. We used to fall apart when I would get out. But this season has been different for Michigan State. We have been able to exorcise those demons and finally get over the hump. MSU won the inaugural MDC in 2005 in what was a single match against the now defunct team from Delta Community College. Historically, MSU has not performed at their best at the Michigan Dodgeball Cup. Many believe MSU will not win the MDC or Nationals because they can never win the big one. A win at the MDC would just be another stop on the 2015-16 “Prove the Doubters Wrong Tour” for Michigan State.

The Yankees, the Patriots, the Lakers and Celtics, and the Canadiens. The four major sports all have teams who have had extended periods of dominance. No matter the quality of the team for that specific season, the franchises and their fans expect success every year. The goal of those franchises isn’t to make the playoffs; it is to win the championship. If one were to extend this analysis to the NCDA, only one team comes to mind: Grand Valley. They have won 7 of 11 national championships, and have been in the championship match every year they have been in the league except for 2012 (again when they played SVSU in the semifinal). GVSU has also won 7 of 11 Michigan Dodgeball Cups. However, they have not won back to back MDC’s since they won four in a row from 2006-09. They are the reigning MDC champs and will look to break that trend on Saturday. For Grand Valley, it’s pretty simple. If the team does not win the MDC and Nationals, they cannot compare themselves to the great GVSU teams of the past. There is a certain pressure of expecting to win every year, but that is what a decade of dominance will do for a program. The difference this year for GVSU is the amount of young players on their roster. They came into a program known for dominating the league. Yet, they already have twice as many losses this season as the last two seasons combined. The youth of Grand Valley will certainly be looking to prove that this is the same GVSU of old, a team capable of taking home trophies.

It was my freshman year in 2013 that CMU brought 10 players to the MDC. Even with some talented players, 10 on 15 at the MDC led to several comfortable wins for the opponents of the Chippewas. CMU lost in the first round of Nationals that year to OSU. The next year, tremendous recruiting brought their club back to healthy numbers, but the numerous freshmen on the roster still hampered CMU deep into the season. Although CMU won against Siena Heights, the Chips once again lost handily to the other three schools at the MDC. Central once again lost in the first round of Nationals, this time to Kentucky. What a difference a year makes. Last season, those freshmen were now sophomores and CMU took the league by storm. Second place at the MDC and a runner-up finish at Nationals signified Central was back and dominant again. The Chips have capitalized off the success of last season and enter the MDC as the #1 ranked team in the nation. Those players that were freshman in 2014 now are the captains of the team. Leski, Hadwin, and Riley, the players who were 3 of those 10 players in 2013, now comprise half of CMU’s overtime roster. Central Michigan won the MDC in 2010, so long ago that not even Brett or Wes were on the roster back then. Brett was a part of the national championship in 2011 for CMU, but neither he nor any other current Chippewa has ever won the Michigan Dodgeball Cup. I don’t believe a win at the MDC would mean any more than to those three players who were on the 2013 CMU roster. No one else on any of the other four teams has experienced a valley lower than they did in 2013. Leski described his match against GVSU at the 2013 MDC as “the worst dodgeball experience of his life.” If anyone comes close to how bad I’m sure those three want to win, it might be those freshmen they recruited the following year. They helped lead CMU from consecutive first round exits at Nationals to the #1 team in the country. A win at the MDC would prove that sometimes you have get to the lowest of lows to reach the highest of highs.

Obviously every player wants to go 3-0 on Saturday. But the motivation for each varies from team to team and even within the teams themselves. The team that can best harness that motivation might get just the slightest edge over the other teams. And in an MDC with four teams as close in skill and talent as what we expect on Saturday, that motivation very well might be the difference.