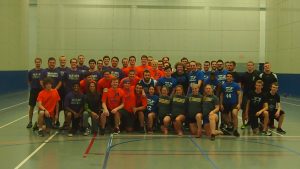 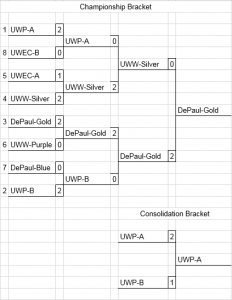 Here are a few thoughts from some of the players at the tournament.

Brad Bautch (UW-Whitewater)- Attending the Platteville 6 v 6 dodgeball tournament was a great place to start off not only my dodgeball career, but my team mates as well. The tournament was well set up and gave us a good taste on how the national collegiate dodgeball matches are paced. Being able to go up against 2 well established teams of UWP and DePaul was a great way to place UWW and the other new school UW- Eau Claire on the NCDA map. Along with the matches these schools lent us a helping hand along the way as well. From how the rules are laid out to how to count or keep track of points, it was a great place to learn. I hope in the near future to return to the University of Platteville for a full 15 man tournament along with other tournaments across the country. We were given a great start by the challenges faced against all teams at this tournament and with the skills and techniques Whitewater has learned we hope to become a contender in the league. 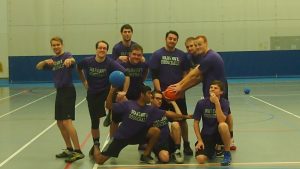 Avi Manthe (UW-Whitewater)- This tournament was the first time we had the opportunity to play against another team besides ourselves. It was definitely a great learning experience for our whole team. This tournament gave us a gage to see where we are at a competitive level. Honestly, none of us thought that we would have gotten second place in the tournament. We would like to thank UW-Platteville for hosting and letting us come play. Hopefully we can play an actual match, and be able to participate in more tournaments.

Quinn Kinser (UW-Eau Claire)- I thought the teams there were super fun to play against, and really fun to talk to. I certainly enjoyed playing at that tournament because it’s always fun to experience new things and the rubber balls were new to us. I would love to come back and play in another tournament with those teams again in the future for sure. 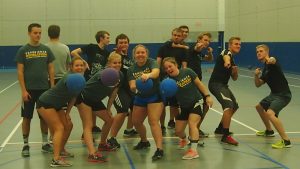 Jordan Whipple (UW-Eau Claire)- This past weekend a group of my friends and I made the 3-hour long drive down to Platteville to be a part of a dodgeball tournament. Going in to the tournament I didn’t know what to expect and I was actually kind of nervous. When getting ready to play I was actually terrified. Some of the teams were incredibly good at playing with the rubber dodgeballs compared to the foam ones we use at UW Eau Claire. We were among eight teams from different areas. It was such an incredible experience. I have played on many teams for many different sports over the years but no tournament could compare to the fun I had in Platteville. It was such an amazing experience. Everyone at the tournament was beyond helpful when it came to answering questions our group had. The other teams even helped to teach us new things along the way. I would highly recommend taking the chance to participate in a dodgeball tournament like the one UW Platteville put on this past weekend.  The people and the atmosphere were extremely fun.

Tyler Hamilton (DePaul University)- DePaul had a great time playing in the inaugural NCDA 6v6 tournament! It was a fun opportunity to not only introduce our own players to another form of dodgeball, but also recruit some possible new teams in the Illinois/Wisconsin region. The players from Whitewater and Eau Claire showed both skills and knowledge of the game and didn’t back down from some of the strong pinch throwers on UWP and DePaul. I was very impressed with their abilities to adapt to the use of 8.5 rubber and compete against several veteran NCDA players. DePaul Dodgeball is very excited to hopefully compete in official NCDA games with both of these teams later in the season. Lastly, I would like to give a big shout out to Zander and the rest of the UWP squad for hosting and running a successful and competitive event! 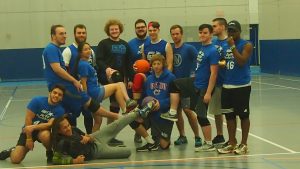 Pam Atadero (DePaul University)- The tournament on the 22nd was overwhelming (in an extremely fun way) to say the least. The multiple matches that happened simultaneously ensured that there was never a moment of silence during play, due to either the sound of shouts or a ball making contact with a satisfying smack. Personally, the adrenaline that accompanies any day of dodgeball is incredibly enticing and the camaraderie among the teams helps keep things light—I could do without the headshots, but it comes with the territory. Each of the teams that attended the tournament were friendly with each other and had excellent sportsmanship, even though tensions were high at times. In the end, everyone just wanted to have fun and play dodgeball, and I believe that we all achieved that.

Brian Hargrove (UW Platteville)- Eau Claire for a young new team they really came out with a lot of excitement and energy. They were new to the league balls that we use, but it was obvious that they were able to adapt very quick. I was very impressed with a couple of their left handed throwers coming up with some really powerful accurate throws. I believe that with time this team will be one that will definitely to prove to be a threat in both 6v6 and the 15v15 games.

Whitewater- This team showed to be very competitive early in the tournament. There was some brotherly competition between our veteran player Matt Bautch and his younger brother Brad. Brad definitely showed signs of being a great player with a wicked left arm. Both of the Whitewater teams were very athletic and were very serious in their game play. They were a fast team and showed that they can even hang with the experienced players.

DePaul – DePaul is always a fun team to compete with. Taking home first place in the 6v6 tournament shows that they are always a challenge. Captain Fluffy always brings his cannon of an arm. The small team DePaul shows that they can be athletic on not only a full size court, but the shorter ones also. 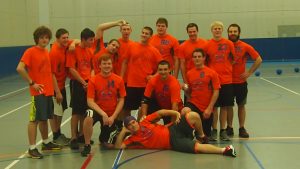 Dominic Cypher (UW Platteville)- I enjoyed the fast paced games of the 6v6 tournament.  The burden ball made the games challenging and difficult at times, but it didn’t prevent the tournament from running smoothly.  I enjoyed playing the other Wisconsin teams and DePaul coming up to show some of the tactics of the game to the new teams.  I had a fun day playing and hope to see these teams in Platteville again next semester.

Platteville would like to thank all the teams that attended and for helping referee the games and keeping the balls in play.  It kept the tournament moving and we could not have done it without your assistance.  Hosting the first ever NCDA 6v6 tournament was a challenge, but a lot of fun.  All the teams were extremely friendly and loved to compete.  It was a great way to meet new teams, Whitewater and Eau Claire as well as get together with a familiar team, DePaul.  We look forward to building relationships up with these squads in the future and hope to see them again in Platteville next semester.