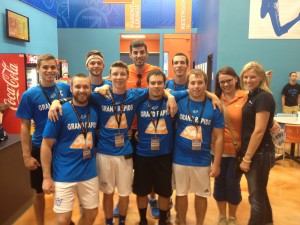 The Grand Valley State University dodgeball team is not used to being underdogs.  This weekend for the Ultimate Dodgeball Championships in Las Vegas they were.  The Lakers needed to win the Facebook vote contest to capture the 8th seed going into the tournament. When I asked about what the other teams expected from them. Senior Kenny Bacchus (#32) “We were definitely the underdogs of the tournament, because of just getting in by the Facebook vote. Even when we got there, we found out that we were the youngest team there, so we knew that we had a lot to prove to all the other teams.”

Representing Sky Zone Grand Rapids (the second largest qualifier in the nation).  I asked if playing in the second largest qualifier helped them going into the championships.  Senior Vince Baggett (#9) said, “It did and it didn’t. It helped because we were able to have more time on the trampolines against competition, it also meant we played some pretty decent teams and our stats were not as good as the other teams in Las Vegas. The biggest advantage you can have is experience playing together on trampolines.”

The first day was a little humbling for the Lakers, during round robin play they ended with a record of 2-5. The two wins in the round robin play were good enough to bump them up to the 7 seed. Their goal was far from completed.

On day two the Lakers came out with a chip on their shoulder.  Team captain Kevin Bailey (#4-C) knew their approach and play would have to change after the first day.  “Going 2-5 on Day 1 was a wake up call more than anything else. We understood that if we wanted to finish as one of the top teams we would need to play with a lot more organization and teamwork, and on day 2 we were able to do that.” They surprised a lot of people by taking care of team Brick Squad from Roswell who was the 2 seed at the start of the second day.

The next match up was the semifinal match against last year’s runner-up, The Canuckateers from Toronto, Canada.  The Lakers started fast again taking the first point from the favored Canuckateers.  The representatives from Toronto came storming back in the second point to tie the match at 1.  In the final point the Lakers took an early lead but a line fault and an untimely thrown catch turned the match into 4 Canuckateers vs. junior Austin Morley (#3). After a couple close calls Morley was able to eliminate 2 players from the Toronto team.  With just 2 players remaining Morley was confident.  “It felt really good I felt like I was in control and in a good position to take them down to try and advance my team to the finals.”  Unfortunately for the Lakers the Canuckateers caught Morley’s last throw, subsequently ending the Lakers run at 1st place.

They came back strong in the 3rd place game to beat the team from Plainfield, IN., Team Really Really Big Show in the 3rd place game.  The use of quick counters and strong throws helped them win quickly in the first two points.  In placing 3rd in the Ultimate Dodgeball Championships the Lakers walked away with both $5,000 in prize money and the respect of their competitors.

When I asked him about the perception of their team junior Trevor Nordberg (#36) answered. “We had to prove ourselves to a completely different community of dodgeball players that we belonged and could compete with anyone. We weren’t just a bunch of young kids who got luckily voted in.”   Not only did they show the other teams and the staff of Ultimate Dodgeball that they were more than just the popular vote, but also they represented themselves, GVSU dodgeball, and the NCDA excellently.