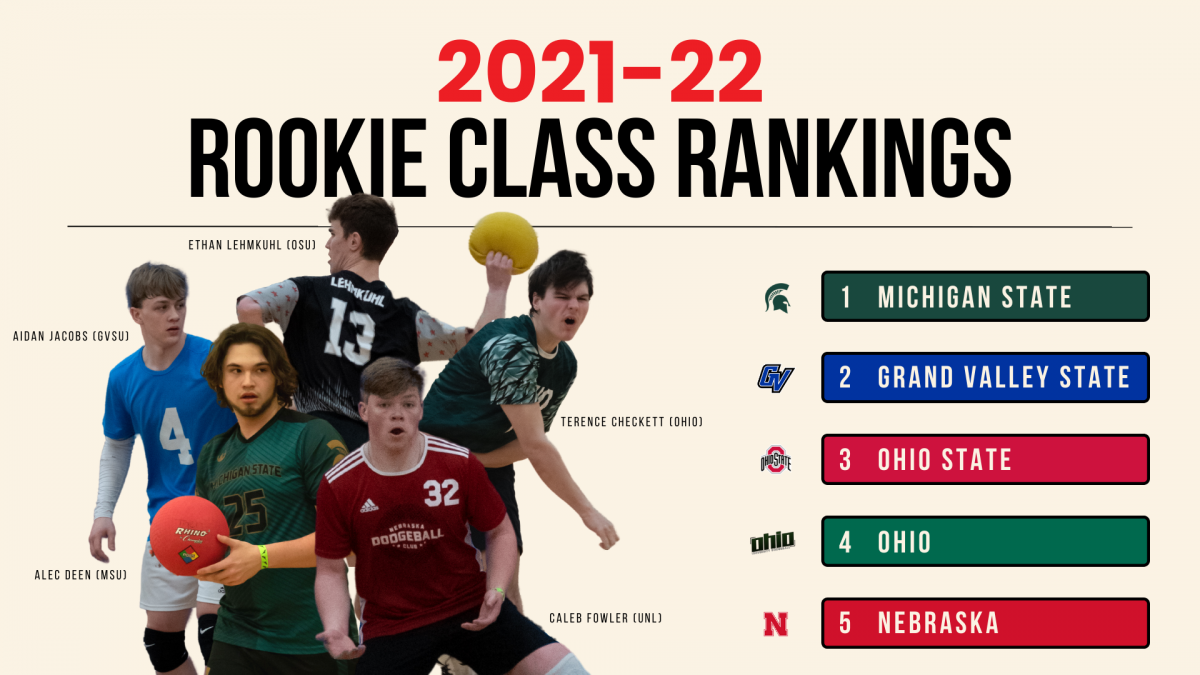 When you start off with the Rookie of the Year and then add the #4 player in all-rookie voting you are off to a pretty good start. Alec Deen and Jonathan Crockett burst onto the scene last year and are a huge reason why Michigan State found themselves in the national title game at season’s end. Just look back at the OT semi-final match up with JMU to see the impact these two had both making the OT roster. Deen and Crockett will be a phenomenal duo for MSU going forward. Both of these guys stand out with their hard throws but have also displayed well rounded games and only got better with more experience.

We could stop right there and justify this top ranking but wait, there’s more. Andrew Dubon was a major contributor down the stretch for MSU and while he is an upperclassmen, he was a rookie as far as dodgeball is concerned. Other key contributors who are impact players but somehow get lost in the incredible depth of MSU are Tyler Marks and Adam Arnold. They play different styles with Marks known for his transition and up tempo play while Arnold displays a deadly throw for the Spartans. The 2021-22 Rookie class may prove to be an all-timer for Michigan State.

You don’t become the perennial powerhouse that Grand Valley has become without bringing in top tier talent year after year. Grand Valley might just be the best team at talent development and it is a huge reason that they find themselves once again with a great rookie class. Leading the way was the #2 rookie in 2021-22, Matthew Budai. Budai really came into his own in the 2nd half of the year and turned heads with his great play on the biggest stage. He is already a phenomenal catcher and blocker which led to him being one the last men standing for the Lakers numerous times at nationals.

Along with Budai is rookie standout Ryan Paddock. Ryan really developed into a solid contributor as the season progressed and has displayed a very strong throw and above average catching skills. Rounding out the top of this rookie class for Grand Valley is Aidan Jacobs. Jacobs is another young, athletic talent that became a key contributor to the Grand Valley’s National Title run. This class might not jump off the page like the rookie class of 2015-16 Lakers but they are a major reason why GV is once again at the top of the college dodgeball world and they will be a factor in helping keep them there for a long time.

The Buckeyes had a great year and it is in no small part due to the immediate impact of their 2021-22 rookie class. We’ll start with Ethan Lehmkuhl who has shown a very well-rounded game and high dodgeball IQ. He has a sneaky throw with great movement and finds ways to make catches at critical game moments. Right behind Lehmkuhl in the All-Rookie voting was Derrek Kemper. Derrek came into the season with drive and power. His athletic instincts make him an unstoppable force in throwing, blocking, catching, and pushing back teams. Despite an arm injury early this year, he’s ready to get back on the court this fall.

The Buckeyes had a huge rookie class – often contributing to half the roster at tournaments. Although we could go on and on about several others, one other rookie has had a huge impact on the success of the Buckeyes, Elijah Thomas. Elijah found the team at a time when practices were nonexistent, but quickly assimilated into the group and found himself in a leadership role this past season. On the court, he plays smart to survive – making diving catches and placing throws just out of reach of opponents.
With this standout rookie class, the Buckeyes will continue to challenge rival teams and work their way towards the National Title.

Post-Covid Ohio dodgeball was on its last leg to say the least. Returning just 4 players with NCDA experience, the club entered a “recruit or die” phase. We can now comfortably say that they stepped up to that task. When we look at the bigger picture, the Bobcats had 13 rookies see the court throughout the season and I think it is obvious that every single one had an impact on their successful season. Sophomores Daniel Van Fleet, Austin Bensman, and Brennan McTighe broke onto the scene with rapid improvement as starting caliber all around players.

Freshman Judson Jones and sophomore Garrett Carbullido brought loads of natural catching ability and immediately transformed into staples in the OU lineup. Sophomore Sean O’Donnell and Junior Eli Cless instantly impressed with their eye catching arm talent. Rounding out the class with Sophomores Charlie Andruss, Rowdy Murphy, and Senior Nick Untch, who all provided much needed leadership and impactful tournament court-time. We will look for this impressive Bobcat rookie class to take the next step in their development and propel Ohio to the top in 2023.

The Nebraska Cornhuskers made some noise and impressed a lot of teams at nationals this year and this is in large part due to their rookie class. This year UNL had several members on the squad that had their first ever experience playing college dodgeball and if you didn’t know that you wouldn’t have expected it. Their rookie class played like veteran players and gave it their all. They were a disciplined bunch and were always consistent in how they played and carried themselves on the court.

For the cornhuskers, this group is going to have a breakout 2022-23 season and they are only going to make beating them that much tougher. The most impressive aspect about them is their ability to catch and turn points and games around. This bunch never panics when they are down and they keep to the plan because they know it will pay off. It has been quoted several times and it will most likely be repeated several more, but corn and protein definitely fuels these cornhuskers! Watch them make even more noise this season!

These teams had some excellent rookie classes and it will be fun to see how they progress and see which ones make a name for themselves. With another season upon us, it will be interesting to see which teams can recruit some of the best rookies and make the top rookies class for the 2022-23 season. We are looking forward to the new season and all the new faces that come with it. Which teams will make it on the list this year?