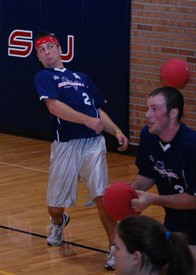 An improved Central Michigan squad gave second ranked Saginaw Valley a scare, but ultimately the Cardinals held on for a 3-2 win over the Chippewas on Sunday Oct. 25.

“I knew it was going to be a close one,” SVSU captain Bryan Janick said. “I had a feeling, especially for our first game. They’ve gotten a lot better.”

“I thought that our team did well,” he said. “Much better than previous years (against SVSU.)”

The Cardinals took the first point after about eight minutes of play, giving them a 1-0 lead.

“We pushed them back a lot,” Janick said. “We had them backed up. I thought was a good thing.”

The Chippewas (0-1), bounced back with a solid effort in the second point, tying up the score at one apiece.

“For our more experienced players, we saw how much we have improved over the last two years and I think it was  wake up call for the new guys to see what dodgeball is really about,” Lynch said. “I think we did well, but still have plenty to improve in to be thinking about a victory versus SVSU.”

“We needed to shadow a little bit better,” Janick said. “We had a few times when people got hit when people were supposed to be shadowing.”

SVSU responded, dominating the next point to go up 2-1 into the half. The point was fueled by several catches, particularly by Jason Stein and Joe Fetterhoff.

“We had a lot of huge catches,” Janick said. “They came at the right times.”

The second half started off with another Cardinal point, putting them up 3-1 with less than 20 minutes to play. Lynch felt his team lacked in experience in crucial situations.

“The difference between SVSU and us in the match was definitely patience,” he said. “There is no doubt that Saginaw has more fire power than us, but in clutch situations they were able to play smarter and make more clutch throws and catches than we were.

The Chippewas claimed the next point, though at a cost of running a significant amount of time left in the game, leaving them without sufficient time to tie up the score.

“That was really important,” Janick said of starting the year off with a win. “We looked kind of rusty but it was definitely a good start to the season, a big victory.”

The Cardinals, 1-0 after the win, travel to Allendale next to face three-time defending national champion Grand Valley State on Nov. 8. in what will be the Lakers season opener. Game time is 3 p.m.