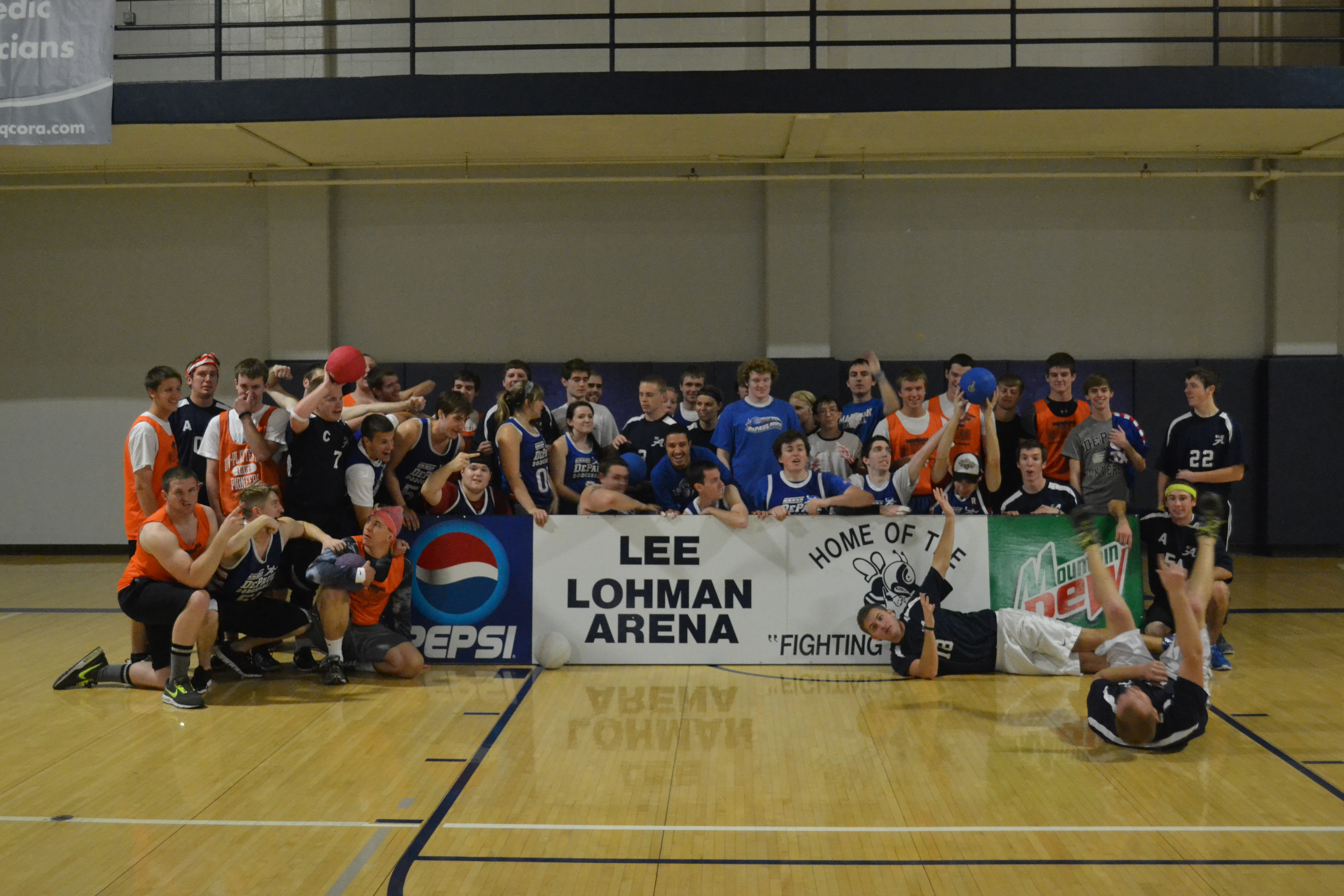 DAVENPORT – Lee Lohman Arena: With the conclusion of St. Ambrose’s Midwest Mayhem, I figure I’d let the small audience that views the League in on the events in Davenport, Iowa. In many ways I still consider the website getting views by only a dozen or so people, but that’s getting off the point.

A different kind of Region

Let’s get this out there. The Illinois region is different than the entirety of the eastern parts of the League. Kent, in many years past, would be excluded from this catch all, but in many ways they’ve turned to the competitive side of things. There’s more teams that may be excluded from time to time, as the old saying rings true: “There’s an exception to the rule.” But as an administrative coordinator, I actively try to keep an open mind on the different forms of dodgeball, collegiate or otherwise.

Coming from DePaul and it’s region, college dodgeball is different here. Our Illinois moniker doesn’t even signal a common thread. The IL Region is a western boundary for a largely Midwestern league doesn’t include much of the traditional midwest. We have teams that identify themselves with Chicago, with southwestern Wisconsin, Great Plains teams in Nebraska and Kansas, and now a team that is officially in Iowa but lies on the Mississippi, divided between Illinois and Iowa. Further, even teams way down the Great River may drive to play Illinois region teams and possibly switch their regions every other season (NSULA and UNT).

I think its important to understand the great distances involved between schools in this region. It’s a stark comparison to the heavily populated Michigan and East Coast region, where another team could be 1-2 hours away. Even with these great distances, the Illinois region shares a common thread. I’ll put this out there, they are all competitive. Even DePaul. But when it comes to it, when the match has been decided, gameplay changes for every team in this Region. I don’t believe these teams essentially give up, I believe it is more of a gentleman’s duel. The Illinois Region team begins a match. They do a bit of show and a point or two are decided; which is based on common etiquette of the NCDA ruleset and perceived notions of how a college team interacts… as determined many years ago by Michigan and Ohio teams. Once this is decided, the team launches into their own play style usually seen at their own dodgeball nights.

We’ll go more into that for the three teams covered in this event.

The Court and Location 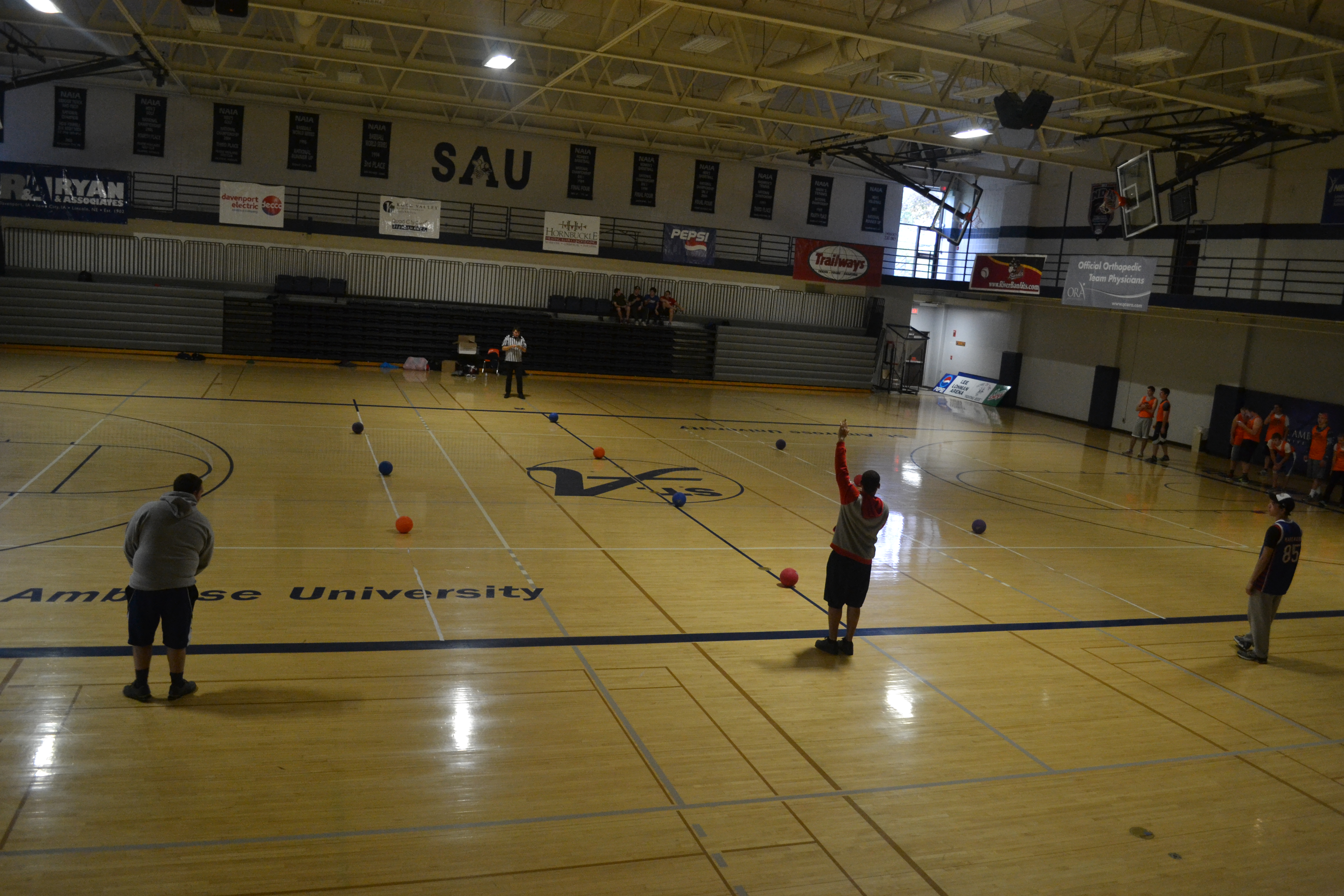 St. Ambrose lies in Davenport, Iowa, one of four small cities bordering the Mississippi river which defines the area; Davenport and Bettendorf on the Iowa side, Moline and Rock Island on the Illinois side. While both UWP and DePaul teams drove the morning of, I went a day early to celebrate a two year anniversary with my girlfriend. We spent the evening before brewery hopping, taking in the people of both sides of the river. There’s only four breweries in this area, but the midwest ethic was strong with them. There wasn’t any discernible distaste between the breweries or locales, everyone willing to share good conversation, regardless of who we were. If you aren’t from the Midwest, we tend to have a Midwest Hospitality thing that is… similar?… to southern hospitality.

St. Ambrose is a tiny campus which shares a football stadium with the local high school. But the court we played on, the Lee Lohman Arena, is used for their basketball and volleyball games. It is one standard basketball court with roll out stands on either side, with a running track above. They were in the process of installing a new jumbotron scoreboard, but it didn’t have the netting over it. There was a local directive against high throws in the direction of the sign, lest a ball shatter it and cause St. Ambrose Dodgeball to cease to exist. Because of this renovation, we were able to lug old Loman Arena signage to use in our event picture, which was actually pretty cool.

Another small note was that the court was partially lit, about 30% of what it would normally be. We unfortunately couldn’t get the maintenance crew to rectify the problem before gametime.

Davis Elkins, Captain of St. Ambrose, looked fantastic in his coordination of the event. From addressing issues of the lighting and potential conflicts with other campus orgs for the space, I felt like he handled everything as ideally as he could.

For the Officiating side, both myself and fellow content writer Troy Dixon traveled from Chicago to help Officiate the event. For Shot Clocks, we included an Alternate Captain from St. Ambrose and various DePaul players who where subs for a particular point. The DePaul-SAU game included staff from UWP, as well.

I guess it helps to have the chief editor of the Rulebook at your first event, because St. Ambrose did have plenty of questions on the rules as a first year team. They opted to having DePaul and UWP play first, in order to watch first hand. Some explanations I covered were:

DePaul brought 17 players, a mix of lower and upper classmen, UWP brought 11. Many will consider UWP the stronger team of the Illinois region. They do have the power arms and catching hands to compete with other teams in the League. Even down players, UWP held their own. In the first point lasting 8 min 12 seconds, DePaul secured victory using their numbers, catches, and team play to secure a point. I’d probably add they used Chaos to help in this. The next point lasted 9 minutes 11 seconds, finally secured by UWP. The third point of the first half was left undecided, with either team having a handful of players on the court at the conclusion of the half.

It’s easy to say that DePaul could have been joking around for the entire match, but for the first two points, they are probably playing to win the points. Not necessarily the match, but for those first two points. After that, even if they are in the lead, they play the way they do at DePaul Dodgeball nights. UWP plays the same way in my opinion. There’s the natural impulse to win, and a strong presence of UWP’s power arms helped secure the match in their favor. After that, it degraded into trick shots and other fun-related dodgeball play. 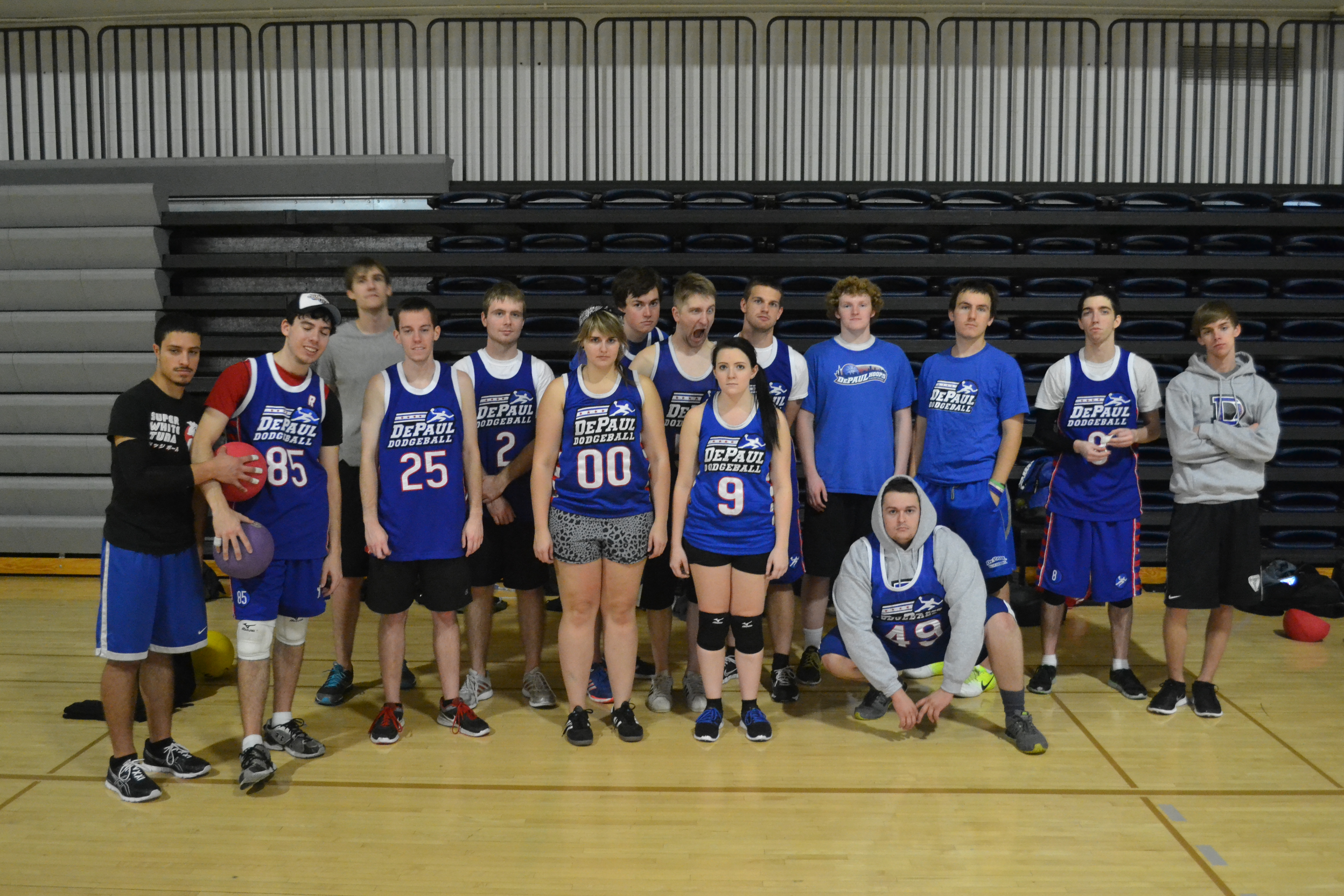 St. Ambrose had a surprising amount of people for an Inducting team, which likely helped from hosting the match. They had about 17-19 people, including a handful of fans, and had uniforms to boot. Their uniforms dark blue, the St. A logo used on their uniforms is also the same used on the varsity Track and other athletic teams.

Ambrose was still very raw on the rules, I remember the team surrounding me at halftime of UWP-DePaul, where I had gone over to entertain questions. Even then, possibly because dodgeball really isn’t that hard and regardless of the NCDA rules we implement, they competed well for a first year team. They didn’t master the grip, but as soon as they understood the value of not constantly rushing the attack line as a single individual, they played smarter.

And as a personal pride, they were still having fun. At start of the second half when SAU won a point against DePaul, one St Ambrose player jokingly remarked: “Ok DePaul, you can forfeit now!” After this match, we proceeded into the event picture and individual team pictures. 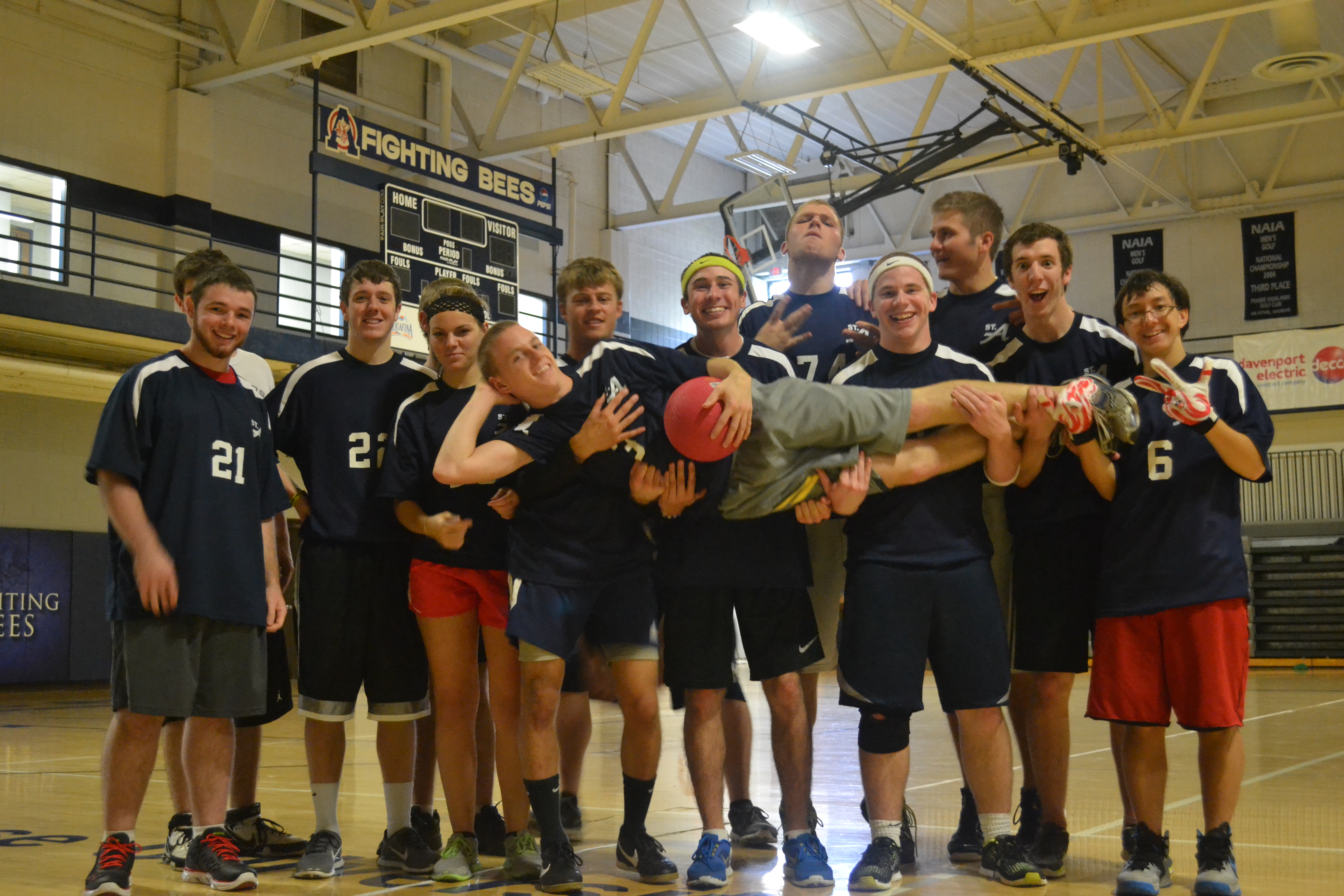 St. Ambrose took what they learned in DePaul’s match and applied it to UWP. Granted, many will consider UWP to be the strong team, and this is true. SAU used a little strategy to keep the match close, not necessarily relying on catching or throwing outright. The first point lasted 3:05, in favor of UWP’s strong arms and seasoned dodging skill. In the next point, which lasted 8:55, SAU managed to dwindle the squad to a 3 on 2 in favor of St. Ambrose. For about four minutes SAU held the statistically stronger UWP with good, smart throws. This was a very close point, and I recommended that the St. Ambrose team take note of their team play for this point. By the time the first half ended, DePaul was ready to leave to get some Culvers and UWP and SAU were setting up for a second half of mixing up the teams.

Each game ended up with mixing the teams together to play random, ad-hoc dodgball games like Raptor Ball, and Trick Shot ball. And left as another note, every team had female dodgeballers. Always good to see the co-ed nature of dodgeball represented. Overall, it’s what I would expect from a midwestern dodgeball event. There was fun, there was competitive dodgeball, and there were good times.