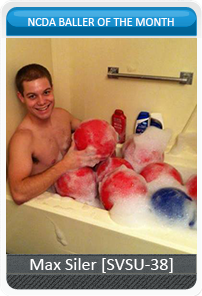 Max Siler is in his second season as the captain for Saginaw Valley State.  Recently, Max led his team to undefeated records in the Michigan Dodgeball Cup, and DePaul University Invite.  SVSU currently boasts a 10-game win streak, thanks in large part to the efforts of their captain.  Over the past few years Max Siler has developed into a star player for SVSU, and he is a very deserving recipient of “Baller of the Month”.

Kevin Bailey: Max, you led Saginaw Valley to a Michigan Dodgeball Cup championship this season, beating CMU, MSU, GVSU, and SHU.  What was the main reason for SVSU’s success at this tournament in your opinion?

Max Siler: I really think the maturity of many players on this team was key to our success coming into the second half of this season.  The first half of the year, we were still trying to develop more team chemistry, and get all our players in sync with the team’s overall plans.  In addition, we have many younger guys who are still adjusting our style of play.  Coming in to the MDC, the amount of selflessness that began to show for many of our players was starting to pay dividends for the team as a whole.  Once we matured as a team, we began to realize that it is about “we” and not “me”. Our communication on the court began to develop, leading to more effective team throws, blocking, etc.

KB: Individually you have progressed into one of the best players on SVSU’s team, and in my opinion, one of the most consistent players in the NCDA.  What would you attribute your individual improvement to?

MS: A lot of what I have learned over the years can be attributed to many of the players that came before me, who helped shape me into the player I am today.  SVSU has had so many great players come through the team.  I am very thankful to have been able to play alongside these guys.  In fact, for some of them, I still do (*cough* Spencer).  In addition, I made sure to be as committed to this team as I could.  I can proudly say that I have not missed a practice since my freshman year at SVSU.

KB: Just like last year, you guys started the season slow, before coming on strong the past few months.  SVSU currently owns the longest win streak in the NCDA.  In fact, your team hasn’t lost a game since early November.  What causes Saginaw to make such huge strides during the second half of the season?

MS: Don’t jinx us Kevin haha! Like I mentioned earlier, I believe the ability to work together as a team is not something that can be picked up within the first month of the season.  I think that once we got some games under our belt, and a few months of practices out of the way, we were able to identify our own strengths and weaknesses and develop the chemistry to put it all together.  We feel that we need to know our own strengths and weaknesses before we start to worry about studying the competition.

KB: At this point in the season everyone is looking forward to Nationals.  What is your favorite memory from any of the NCDA Nationals that you have attended in the past?  Also, what are you most excited about for this season’s national tournament held at Ohio State?

MS: Well I’d be lying if I said my favorite memory wasn’t winning the 2011-2012 Nationals at Saginaw, in front of our home crowd.  It was a tremendous feeling, being able to hoist the trophy with friends and family in attendance.  And the talent on that team was unreal.  But besides that, my freshman year, 2010-2011 Nationals at WKU, we played a very good WKU team twice in the tournament, once on Saturday, and again on Sunday.  Both games were some of the most intense that I have yet to play in, and rivaled the intensity of many of the Battle of the Valley matches that I have played in over the years.

For this year, as is the same for every Nationals, I most look forward to just the overall atmosphere of the NCDA Nationals.  Being able to see all the teams in attendance, all the games that are to be played, and all the rivalries that may be renewed/started, just makes for an amazing overall weekend.

KB: Awesome.  Well congrats on winning the MDC, and a well deserved “Baller of the Month”!  Any last comments?

MS: Thank you!  Just looking forward to seeing everyone at Nationals!  Good luck to you guys, Kevin, and good luck to the rest of the teams attending this year!  I hope it will be one to remember!