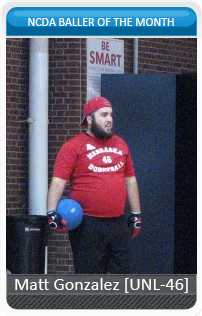 Matt of Nebraska-Lincoln Dodgeball is one great guy with a positive attitude, and known for a mighty beard. Some say the pure black of the full beard, when coupled with the Nebraska red, combines to create a sight to intimidate even the most seasoned opponent. His performance on the court, hospitality, and awesome demeanor led his fellow Nebraska Invite captains to nominate him for 2013 November Baller of the Month. I sat down to interview him over the internets.

Zigmas Maloni: You were behind the formation of the dodgeball club at Nebraska-Lincoln, correct? How did that process go?

Matt Gonzalez: Yes, I restarted the club in the Fall of 2009. Luckily, there had been a dodgeball club recently enough that I was basically able to reactivate from probation. I didn’t have to go through the normal approval process required of new sport clubs here on campus. I still had to deal with the biggest issue facing new clubs: recruitment. The first two years, the club was pretty much my own friends and their friends.

ZM: What do you think of UNL Dodgeball in its present position?

MG: We’ve taken big steps from those early practices with 4 or 5 people, but there’s still a lot of work to do to catch up with the rest of the league. We accomplished two of our major goals recently: host a tournament, and win a match, but but we still have one major goal yet to accomplish, which is to attend Nationals. Hopefully they can do that this season.

ZM: Nationals will be a great for you guys if you can make it. Tell me about the road to hosting the Nebraska Invite.

MG: I was worried at first. It was the first time playing in an NCDA match for half of our team, and it showed. We went down 2-0 early, but they got into the swing of things after that and we were able to pull out the win. To be honest though, it felt like I was out a majority of the match! As soon as I would get back in from a catch, I would get hit. I think most of the credit for the win goes to the arms of Drew Dungan and Matt Gregoire. We lost Matt at halftime of UNT (he had to head to Omaha for a family function) and it definitely killed any momentum we had in that match.

ZM: I remember MSU was excited to play a fellow Big Ten team when DePaul hosted the last few Chicago Dodgeball Opens. What do you think about NCAA rivalries as opposed to NCDA rivalries?

MG: I like the idea of a “Big Ten dodgeball champion,” but it doesn’t really work right now. Both MSU and OSU are too far for us to play on a regular basis. The same goes for when Maryland joins the conference next year.

ZM: I also wanted to thank you for helping introduce the International Rugby Board ranking system as a potential standings system. We’re going to have a League vote about the NCDA Ratings Percentage Index over the winter break, but do you have anything you want to add about that?

MG: As far as the IRB ranking system, I don’t think there’s much to say about it. I’m not sure if it’s necessarily the best for the NCDA as it takes a few games for the rankings to reflect any major changes. I’ll probably keep it going just to see how it works out for the next season or two.

ZM: One last thing: how long have you been working on that Mighty beard?

MG: I guess I’ll have to break the bad news here. I regret to inform everyone that I’ve been forced to shave the beard. I’m applying for some part time jobs and figured if have a better shot if I were clean shaven. I had probably been growing it out for 2.5-3 months, though.

ZM: Shame about the beard! Any shout-outs you want to make before we close this out?

MG: I think the biggest one should go to Caleb Klatt for stepping up and taking over the club. At the end of the 2011-2012 season I was about to have to close out the club due to lack of interest and being unable to be president for another year. He volunteered to take over as long as I helped out and has kept the team on the track that I had hoped for.