With the rapid expansion of the league in the past few seasons, we have seen more and more talent emerge from all corners of the NCDA.  The future of the NCDA is bright, and we’d like to take the time to show off those who represent the brightest stars of the future generation of the NCDA.  These rookies have exemplified skills ahead of their years and have been big contributors to each of their programs even in a short amount of time.  Here is the NCDA All-Rookie Team: 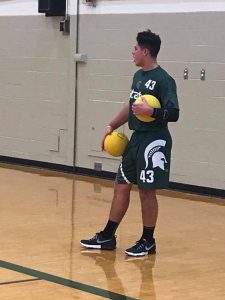 Payton Schuster earns 2018 College Dodgeball Rookie of the Year after a stellar first season with Michigan State.  Schuster developed into one of MSU’s top offensives pieces in a very short amount of time during his first season with the Spartans.  The freshman had a breakout performance at the 2018 Michigan Dodgeball Cup in February, and has not slowed down since.  His impressive side-arm lefty throw paired with strong  catching skills make him arguably the most talented rookie in the league. His role will increase for MSU next year, as he has taken over captain duties for Michigan State.  Look for him to have a big sophomore season! 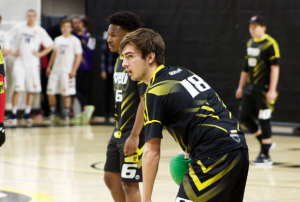 After putting on one of the best freshman performances at Nationals of all-time and earning the nickname “Mr. Reliable” from former MVPs Kevin Bailey and Colin O’Brien, it’s no surprise to see Fleckenstein on this list.  However, he has been solid all year for the Rams, and even found a spot onto VCU’s OT 6 squad in his first semester with the team.  While he was most notable for his catching ability, Fleckenstein also developed a solid throw early in his career which helped lead VCU’s offense in a pinch.  Next year he will serve as an assistant captain  for VCU.

Central Michigan had plenty of star players on their team in 2017-18, but that shouldn’t take away fromt he type of recognition that their rookie Eric Nelson deserves.  Nelson was one of the top rookies in the country this year.  Nelson is a very talented dodgeballer, with a strong arm that can pick off opponents consistently, and the catching instincts that helped him make clutch plays all year for his team.  Nelson’s skills were never more obvious than during their win over GVSU in March when he came back from a last man standing to make several huge catches and throws to bring CMU back to win the point.  I expect to see many more sequences like that next year, as Nelson will be one of CMU’s top players in my opinion.

Jonathan Smith had one of the most explosive starts out of any freshman I’ve seen out of the East Coast in my four years in the league.  After JMU’s first tournament at UMD this season the first thing I noticed was his awkwardly fake jersey which is always a clear indicator for freshmen in the NCDA.  The next thing I noticed was his powerful arm and deceptive athleticism, and I knew immediately this kid was gonna be a problem for years to come.  Smith, or has his teammates refer to him “J-Man”, had many highlight reel moments this season, and there’s no doubt in my mind he will be the next program defining player at JMU just like Doug Schilling and Brent Gromer before him.

While Rookie of the Year Payton Schuster may garner most of the recognition, MSU has several more rookies who had a major impact in 2018.  Make no mistake, Sullivan is one of the best rookies in the country, and he is just starting to tap into his potential.  Sullivan is another MSU player who made significant improvements during the year, leading up to a very strong second half of the season.  Sullivan is an all-around player who can make a clutch catch, or be counted on as a high volume thrower for MSU.  Don’t be surprised when Sullivan becomes an even more well-known player next season for MSU.

The top rookie on Grand Valley State’s team, Hill came on very strong this season, making a big impact for the Lakers at both MDC and Nationals.  Hill, while young, already has very high dodgeball IQ, and he used it to his advantage this year.  The rookie is a solid catcher, but what really sticks out about him, is his ability to anticipate the opponent’s plays and run up in transition to create offense for himself and his teammates.

Cole Geil was an all-around threat for the Falcons this year and arguably the ringleader of a very talented freshman class of BGSU players.  Geil has a very underrated arm and can be a solid catcher for this team for years to come.  With the amount of talent on BGSU this past year he played more as a role player, but I fully expect him to be one of the league’s biggest breakout players next year as he progress more towards being the star player he’s destined to be.

I was just surprised as many to find out that Dominic Tyburski was a rookie player, but here we are.  Tyburski has a big presence on the court both literally and figuratively.  With his strong arm, he played a major role in Miami’s success this year and helped lead the offense of the Redhawks.  Going forward, he is going to continue to be a major threat and leader within the Ohio region and the rest of the NCDA.

As with any new team you can expect to see growing pains early on and a little bit of uncertainty of what to expect.  When I had the chance to help out at UNG’s Gold Rush event, Ethan Kraus was a player that stood out to me more ways than one for the Knights.  His willingness to lay out for balls and being able to block well for himself along with teammates is something you rarely see out of any newcomer to the NCDA, much less from a brand new team.  With a ball in his hands, Kraus can be dangerous and one of the toughest outs in the league.  He is taking over as President next year, and already has plans to take the league by storm.

Colin Moerman’s signature moment this year was his play during BEAST VII at JMU.  Moerman stepped up big time for the Tigers against both GVSU and JMU, two of the toughest teams in the country.  This included making multiple big time catches against GVSU to help swing momentum into Towson’s favor, which ultimately led to him being part of Towson’s overtime team.  He’s a player that reminds me a lot of Jeremy Brown.  Even without the most powerful arm or being the best athlete on the court, he has incredible awareness and attention to detail that will serve him well throughout his career.

Few players made as big of strides in their rookie season as Brent Weakland.  The first year player for MSU was a very pleasant surprise for me during the second semester as he transitioned from a little-used rookie, to a dependable and clutch performer for the Spartans.  Weakland is such a smart player, and his dodging and catching skills make him someone who is very difficult to get out.  He improved immensely during the year with his arm strength/accuracy, and by the end of the season he was a very reliable arm for the Spartans.  I expect big things from Weakland during his sophomore season.

As mentioned above, BGSU had mutliple solid rookies, and Max Vincent proved he was one of the elite members of the NCDA’s freshman class.  Vincent’s greatest strengths are his competitive nature and court awareness.  For someone who’s relatively fresh in the league, those are two skills that often don’t come easy for any player and especially rookie players.  If he can improve on his catching he will certainly be able to add to his dodgeball accolades for years to come.

Rounding out this list is one of my teammates, Myles McPartland. If this name doesn’t ring a bell for you, it’s probably because he’s only played dodgeball for one semester. However, Myles came out firing for UVA this spring and isn’t looking back. He quickly picked up the skills and strategy necessary to be a solid all-around player and he played a key role in UVA’s success at Nationals. Myles combines a strong arm and a knack for catching to consistently pick off opponents one-by-one. He’s a player I’m excited to be playing with again next year and I’m especially glad that he’ll be standing on my side of the court. Over the next three years, look for Myles to improve his already impressive skill-set and make a name for himself in the NCDA. With only one semester under his belt, the sky’s the limit for Myles’ potential.