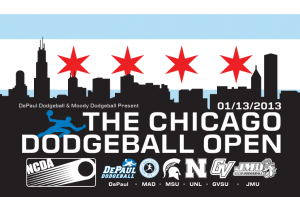 Grand Valley would end up the champion of the tournament, going 3-0 with wins over JMU (3-1), Nebraska (6-0 in a game called early due to time constraints) and DePaul (5-0). The game with JMU was one of the two premier games of the tournament, with the Dukes taking an early 1-0 lead. James Madison played to their strengths by playing excellent defense and using their power arms to get rebounds. GVSU also made a few mental mistakes in the first point by stepping over the neutral zone line a couple of times. The Lakers would respond however, taking the next three points to pick up a well deserved victory in the first battle of these two teams. The Lakers brought close to their best roster, so the results were not surprising. They play next at the 2013 Michigan Dodgeball Cup, where they’ll get matches against #4 MSU, #6 SVSU, and #7 CMU.

JMU had a great tournament, going 3-1. Their sole loss was to GVSU, in a game where they proved they can hang with the big boys of the NCDA. Their strategy was very sound, using their power arms getting rebounds to maintain ball possession helped them pick up some big wins. Against the Spartans (a 2-1 victory) they kept MSU on the baseline in the first half, not letting State get any offense going at all. In the second half they were able to play great defense, holding MSU to only one point despite Michigan State coming on strong and dictating the tempo. James Madison had some standout players, and look to be the real deal. They also beat DePaul 5-0 and Moody 4-1. JMU is off until the BEAST II where they’ll get a tough schedule and hope to get more wins and experience.

Michigan State had a fairly successful showing at the CDO, especially since they brought 14 players. They were down most of their big arms, but their catching and transition play helped them take Moody (8-0) and Nebraska (11-0) while almost forcing overtime against JMU. MSU had a some big catches against JMU to keep them in the game, and they were able to catch all the Archer and Husker players. Without any subs and down so many power throwers, the Spartans had to have good performances by all of their players, and all of them played well. Michigan State next plays at SVSU for a big game between their rivals.

Moody Bible missed their best player (Ryan Pattison, MAD #10) for the game against MSU, but when he came back in the afternoon he was able to change the Archer’s play. Jake Ochoa (MAD #3-C) had some big catches as well, and the Archers played very well for a team with only 12 players (school had not yet started for Moody, making it hard to get players.) They lost to MSU and JMU, but were able to take Nebraska (6-1). Moody looks to be about the same as last year, meaning that they could sneak up on a good team and take them down, and should be able to handle the mid-level and bottom teams. MAD next gets a game against DePaul at the end of the month.

DePaul also picked up a win this weekend at the CDO, taking down Nebraska 7-3 in a game in which they looked really good. They dropped games to JMU and GVSU, but they showed that when they try, they’re a solid team. They also did a great job hosting the tournament, one that went without any hiccups. DePaul plays Moody next, and then they may make the trip to the Ohio Dodgeball Cup.

Nebraska showed a little improvement over their appearance at the 2012 CDO, despite only bringing 11 players. They may not have picked up their first win in program history but they did pick up a few points, which is good growth for this new team. The Huskers will hopefully be making the trip to Lexington to play at Nationals 2013.