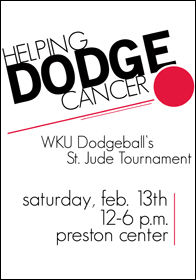 On Saturday, Feb. 13, Western Kentucky University hosted a five-team charity tournament at the Raymond B. Preston Health and Activities Center.

In its first game, WKU faced Northwestern State University out of Louisiana, who was competing in its first-ever tournament.

Many opposing players said they were caught off guard by the Deamons’ efforts, specifically because of their inexperience.

After dropping the second point, the Toppers sealed the victory with three straight points to finish the job.

WKU sophomore Kyle Dahl made his presence known late to push them to victory.

“I just had to step up and make the throws,” Dahl said. “You’ve just got to have those certain people that want to step up if you want to win.”

Though he did perform well in his first game, Dahl said he was trying to save his arm for the next two.

In their second game, Western fell to The Ohio State, 3-1.

The Buckeyes beat them quite convincingly, winning three consecutive points after allowing WKU to win the first.

OSU didn’t discriminate, going undefeated in the tournament and taking home the trophy.

Joe Spicuzza, a senior for the Buckeyes, said he really enjoyed his time in Bowling Green.

“It’s been great,” Spicuzza said. “This is probably one of the funnest times I’ve had playing dodgeball.”

Up 2-0 at the half, WKU went on to beat Kent State University by a margin of three to one.

Western sophomore Colby Osborne was key to his team’s win over KSU.

“You really had to pace yourself, pick and choose your shots,” Osborne said.

Josh Raymer, founder of WKU’s dodgeball team, said he wanted the team to host an enjoyable tournament that provided a competitive atmosphere.

He admitted that some other teams are ahead of the Hilltoppers at this point, but said he sees progress being made.

“We’re right there at the cusp of being at their level,” Raymer said. “I think we really measured up to what I’ve seen so far.”

While each team participating did want to win, it was clear that there was a greater mission to be accomplished.

Through the sale of tournament t-shirts and spectators’ donations, $1,010.76 was raised for the Research Hospital.

Felix Perrone, a Western sophomore, was instrumental in the event’s planning.

“I wanted to have a great time and try and raise some money for these kids,” Perrone said.

His father, Peter Perrone, who is the vice president of PNC Bank in Bowling Green, was able to secure $500 from the bank to add to the amount raised.

“It’s a worthwhile cause,” he said. “We were just glad to be able to help out a little bit.”