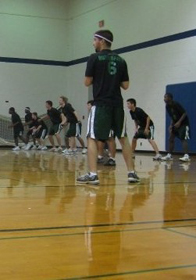 Six teams came together for the second annual Kentucky Dodgeball Classic on Nov. 16. Three teams finished the day at a perfect 3-0, and three others finished 0-3, yet Saginaw Valley State University was awarded the first place trophy due to point differential.

For SVSU, it was their first tournament championship as a team.

“The thing I was most impressed with is how many people (on our team) actually wanted to go this year,” SVSU president and captain Bryan Janick said. “It was nice having a full team even though six varsity guys didn’t go.”

Saginaw Valley opened up their tournament with a 7-1 win over Western Kentucky. They followed it up with two more convincing wins over the University of Louisville 9-0, and host University of Kentucky 5-0.

“We played really well, but the one game that stuck out the most to me was when we lost our only point to Western Kentucky,” Janick said. “The next game we did not let them past the half court line and the win only took 45 seconds. It was amazing.”

“The tournament was a great opportunity to play some teams early in the season that we don’t normally see until nationals,” Michigan State president Michael Youngs said. “I think that our rookies got some much needed experience and all in all it was a great tournament for our team.”

While Western Kentucky, Louisville, and Kentucky went a collective 0-9 on the day, they still gained a lot of experience.

For Louisville, it was only their second day of action in the National College Dodgeball Association.

“Everyone threw a lot harder and seemed to have at least some kind of strategy in place. We went into the tournament wanting to gain experience and have fun and I think we were able to do just that,” she said.

While Western Kentucky was able to beat Louisville earlier in the season, they found playing the northern teams much more difficult.

“In order to beat the non-Kentucky teams, we must learn to play better as a team and stop attacking alone,” Western Kentucky president Josh Raymer said.

“We also must do a better job of watching out for cross court throws and dominate the other team from the opening rush. We stay on the baseline too much and let the other team pick us off in bunches,” he said.