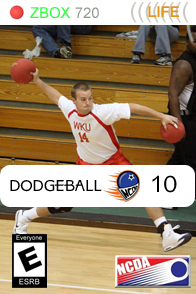 Ask any college player, and they’ll tell you that the great game of dodgeball can really take a physical toll on its participants over the course of a season.

Busted lips, twisted ankles, shoulder tendonitis — almost everyone can attest to the aches and pains this game can dish out from time to time.

In my personal opinion, one of the more underappreciated side effects of our favorite game is the damage done to the poor fingers on your throwing hand.

Thank God we only play this game while we’re in college or our hands would wind up looking like those of an offensive lineman in the NFL.

But as much as we moan and complain about finger pain brought on by the grippy, we’re perfectly happy to burn our fingers out enjoying another favorite pastime of college students: video games.

If you’re reading this, chances are you’ve probably blown off a test or paper to save the world on Halo 3 or duke it out with your buddies on the latest version of Madden.

Speaking of Madden, it’s still amazing to me that the NFL’s marquee simulation is popular enough not only to have its own TV show (Madden Nation), but also its own holiday (albeit one created by advertisers).

I’m convinced that Madden and the NFL have gone hand-in-hand in helping push one another to the top of their respective entertainment heaps.

Which brings me to the topic of this What If installment.

I know it’s the summer, but if you could all please flip your imagination from “Off” to “On,” I want to take you into a world where college dodgeball has finally hit the big-time.

A world where college dodgeball finally has its own video game.

If the above line would be the realization of a longtime dream that you’ve had, you’re not alone.

When I’m not considering the chilling ramifications of a world without the grippy throw, I’ve often devoted hours thinking about the possibility of a college dodgeball video game.

While I’ll spare you the full details, I want to draw your attention to some of the highlights of this exciting alternate reality.

First off, just imagine the impact of a full-fledged video game would have on our up and coming league.

I’m not talking about some kid in his basement putting together a Flash game with stick figures for him and his buddies to enjoy on the Internet.

I’m talking about the royal treatment from a premier video game company like EA Sports, complete with the same fanfare and promotion a new Madden release would see.

Consider for a minute how many millions of people have either seen, heard of or played Madden at some point during their life.

Let’s just say for argument’s sake that half of all Americans meet one of the criteria from the above sentence, meaning close to 150 million people would not look dumbfounded if you brought up Madden in a conversation.

Think about that. 150 million people. That’s mind-boggling. I’d be shocked if 150 people at our university knew that the dodgeball team existed.

Now picture those millions of people coming home from the store and popping NCDA Dodgeball 2010 into their videogame console, eager to see if Grand Valley is still the highest rated team in all the land.

Furthermore, the league’s revenue would be off the charts and the media coverage we received would be insane.

Any player besides me fancy tuning in to SportsCenter every morning to check up on their competition and watch a Top 10 that included a sick collection of headshots?

I think every college player across the nation just muttered, “Yes, please” in unison.

As for the game itself, my inner geek has definitely had fun imagining exactly how a college dodgeball simulation would work.

It would truly be a game different from anything we’ve ever played before.

Like I said, I could spend the next 1,000 words laying out the specifics of how I think the game should work, but I think a basic rundown will suffice.

Sticking with the golden standard for sports videogames, I could see controlling a college dodgeball player being very similar to controlling the quarterback on Madden.

Want to make a throw? Picture a pitching meter similar to those found on baseball video games — fill up a quarter of the bar to throw a lollipop or fill it all the way up to unleash a hellacious fastball.

Want to beat the other team to half court on the opening rush? Better tap the turbo button before the ref yells “Go” to get that extra burst of speed.

Use a simple flick of the controller stick to bring the ball up and block when you’re being targeted by the other team, just like how you’d raise your gloves to your face during a boxing match on Fight Night Round 4.

Switch over to the captain of your squad and pull up the in-game menu to call out plays for either offense or defense.

And if you time it up perfectly, hold down the trigger to enter slow motion and annihilate a competitor’s face with a devastating headshot, complete with the knockout physics seen in the aforementioned boxing game.

Are you drooling yet?

Seriously, tell me one other game that could seamlessly combine familiar elements from other sports games like NCDA Dodgeball 2010 would?

We all cherish the chaotic and frantic atmosphere of a college dodgeball game.

Anyone who’s played the game knows there’s no other sport that requires you to simultaneously play offense and defense, watching for your headshot opportunities while trying your best to avoid ending up on someone’s highlight reel.

Find a company that can successfully translate that manic energy into the virtual world and you’ve got the single coolest video game of all time.

Before we leave, I want you to spare one final thought for a world in which you could come home after a tough loss to your rival school, turn on your console, and pummel that team unmercifully in virtual reality for their success in the real world.

On second thought, let’s not leave yet — I want to make sure I’m the highest rated player on my team.