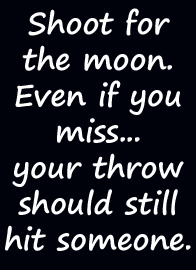 When I was in middle school, there was a poster that hung in my homeroom class that read, “Shoot for the moon. Even if you miss, you’ll land among the stars.”

Corny, no doubt, but the message was clear:

Aim as high as you can when making your goals. That way, even if you come up a little bit short, you’ve still accomplished something noteworthy.

A couple months ago, I made a moon shot in one of my columns.

I titled it “Virtual Reality as an Actuality” and spent the next 1,100 words talking about the possibility of a college dodgeball video game.

I talked about everything, including the implications of such a game on our sport and how such a game might play on today’s consoles.

It was a total fantasy, but like the poster in that classroom, my message was clear:

Well, we haven’t made it to the moon (yet), but I’m thrilled to announce that it appears the league has landed among the stars.

Back on Sept. 1, I received an email from Morgan Haro, a marketing associate from Hudson Entertainment.

I hadn’t heard of Hudson before, but upon further reading, I found out they’re a video game publisher whose latest release, Deca Sports 2, will be released for Nintendo Wii on Sept. 29.

What does Deca Sports 2 have to do with the NCDA?

Well, for the first time on a modern console, dodgeball will be featured on a video game.

No, you didn’t misread that last line.

Dodgeballers can finally shelve their copy of Super Dodge Ball on the NES because there’s a new virtual counterpart in town.

Deca Sports 2, a Wii Sports-esque compilation game, won’t feature the incarnation of dodgeball we’re using to playing in the NCDA, but that’s not the point.

Morgan wasn’t emailing us to sell his company’s new game.

And instead of telling you what he did say, I’ll just let Morgan speak by sharing the last two paragraphs of his email:

“The reason for my email is to spark discussion on a potential partnership between Hudson and NCDA. The Deca Sports series is known for bringing sports that may not have a strong awareness in North America. Last year, we partnered with the United States Curling Association, the Canadian Curling Association and the Association of Volleyball Professionals, and were able to provide Wiis and copies of the game to all of their events to provide a new form of entertainment at the respective events and at the same time, raise the interest level of the sport at hand with an audience that may not have been interested. Needless to say, everyone came away with a big smile on their face!

I’d like to discuss how cross-promoting and integrating our product can attract more attention and add more well-rounded entertainment at your events and raise the awareness of the NCDA. The idea is to have zero financial transactions here so don’t worry, I’m not after your pocketbooks to have some sort of sponsorship. Just a strong cross-promotion with the foundation being the sport at hand and how it’s featured in the game and in real life. I’m open to discussing ideas, but would welcome the opportunity to introduce DECA SPORTS 2 further.”

Did your jaw just hit the floor? I know mine did the first time I read this.

I talked to Morgan about a week later, and just in case you’re confused, here’s the basic game plan we’re looking at with this potential partnership:

1. Morgan and his guys want to come to our big events throughout the season with big screen TVs, Nintendo Wiis and copies of Deca Sports 2.

2. Once they arrive, they’ll get everything set up and have the game playable for anyone who want to come check it out during the event.

3. For this season, I suggested three events they should attend: the GVSU-SVSU game, the Battle of the Bluegrass between WKU and UK, and Nationals.

4. Here’s the best part: in exchange for allowing something that will likely increase the attendance and entertainment value of our events, the NCDA gets a link on Hudson’s website and a mention in their newsletter.

If everything goes according to plan, it’s my hope that we’ll notice an immediate increase in both visibility and credibility for college dodgeball.

But what about a long-term benefit for both parties?

In a perfect world, Hudson would want to make an exclusive dodgeball game after the rave reviews the dodgeball segment of Deca Sports 2 received.

However, instead of simply stretching their version of dodgeball into its own game, they’d want to create something substantial and unique.

Who better to help them the NCDA, the premiere dodgeball association on the planet?

I think it’s safe to say we’ve landed on the moon.