On February 2nd, Towson will travel to College Park to take on the Maryland Terrapins and VCU Rams, and they’re looking to get some valuable wins and some even more valuable experience as they play in their first tournament of 2013 ahead of the BEAST II, Richmond Dodgeball Cup, and Nationals 2013. 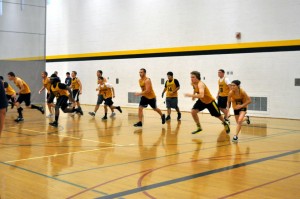 The Tigers of Towson are on a mission to pick up their second and third wins in school history. They’ve improved significantly in their second year as a NCDA team, as they lost 13-0 in their first match to Maryland in 2011, 6-0 in their second match in September 2012, and then 2-1 in their last match vs UMD in October 2012. Towson Captain Sean Smith (TU #19-C) says on the reasons why the Tigers are getting better:

“Experience for one, more talent second, knowledge on how to throw a pinch and we’re making more of a commitment to really know one another to make our chemistry better.”

The Tigers have a two staged attack style of play, which could really benefit them in tournaments. Their first attack is a speed rush on the opening rush to try and take down as many opponents as possible, then they play similar to a Michigan style of play with a fast counter attack style. 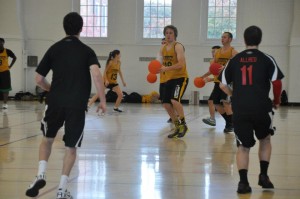 Players to watch out for on Towson are, according to Smith:

“Joe Tobin (TU #5) is by and large the biggest name we’ve got, he used to be a pitcher for Calvert Hall College. Dylan Levy (TU #15) is a stud freshman with too much potential for his own good, Jordan Haxton (TU #3) was a late semester addition (also a freshman) who is an all around effort kind of player with a knack for clutch situations, and Luke Search (TU #4) is the kind of guy with stuff that isn’t going to surprise you, isn’t going to catch you off guard, but you can’t really stop him unless your a high-end catcher.”

The Tigers are not going to back down from either of these teams, and would love to pick up some wins. Smith says,

“Well, it kinda varies, should we beat VCU it’ll mean that we beat the only team we’ve ever beaten again, but nationally it doesn’t signify much since they’re a first year school (no offense to them since they’re the new us), but beating Maryland would mean that after starting as the bottom East Coast team we’re ready to take over 2nd place on the East Coast and soon enough get ready to knock off JMU as top East Coast school.” 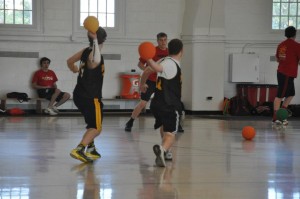 Towson has been gaining reputation from some of the other captains of the league, and they’ve got a good chance of winning this round robin and getting some momentum going to the BEAST II. They’re happy with the noise they’re making so far, especially going from the team with duct taped numbers on t-shirts to a team that’s turning into a legitimate force in the East, but they’re not satisfied yet and this tournament will give them a chance to prove themselves even more.

One thought on “Towson Travels to Maryland for Round Robin”