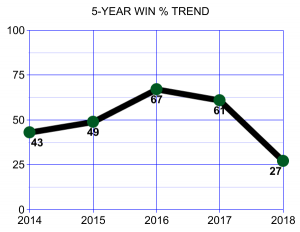 A bunch of rookies we don’t know yet…

Season Preview: Arguably the most intriguing team in the NCDA entering the season, MSU will have very high expectations for their inexperienced group this year.  The Spartans finished 2017-18 by making the Quarterfinals at Nationals. That kind of finish would be a severe disappointment for this squad.

The Good News: Payton Schuster is the headliner.  The sophomore has taken the reigns as Captain of the team, and he is backed by plenty of other young and talented players, including Dennis Sullivan and Brent Weakland (both sophomores as well).  On, and the Spartans have been outworking everyone in the offseason with recruitment. They had several players committed to joining the team before they even stepped on campus to start the school year.

The Bad News: Yes, there is a lot of hype surrounding this team.  But let’s not forget, they will once again be among the youngest teams in the country.  Can they overcome their inexperience to become an elite program right away? They may take some unfortunate losses in the fall semester due to their lack of experience.

Our Call: Michigan State was not down for very long.  The 2017-18 season was a learning experience for everyone involved.  Luckily for the Spartans, they are beginning to recruit at the level that one would come to expect from a Big Ten school like Michigan State.  If they can continue to develop their young talent, this will be a very exciting team to watch come April.