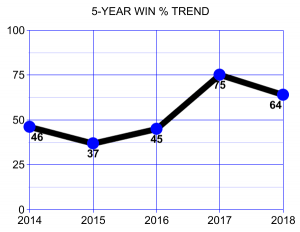 Ricardo Menchaca (A)
Daniel LaJeunesse (A)

Zachary Parise (second half of season)

Ricardo Menchaca (second half of season)

Season Preview: It is reasonable to expect the Wildcats to improve from the team they were a year ago.  While they are still relatively green in terms of experience, they can still rely on old club leaders for guidance early in the season.

The Good News: For the time being, the University of Kentucky loses zero players from last year’s roster.  They also had one of their largest recruiting classes in recent memory last season and can look to build on that for future seasons.  It’s also been said that they recently had another big crop of recruits for the beginning of this season which is certainly something to be excited about.

The Bad News: The two things to be concerned about in terms of the long term outlook for the Wildcats are their youth and the (eventual) departures of Zach Parise and Ricardo Menchaca.  This team is still relatively young and will have to rely on a lot of Freshmen and Sophomores this season. Because of this, it’s not unlikely to expect some early growing pains for their club.

Our Call: This team is a mixed bag when it comes to what they might accomplish.  Last year’s Kentucky squad flipped results on multiple teams including Ohio and Miami, and it’s probable that this could happen again this year with other teams as well.  Since they will be more than likely playing a majority of Ohio and Michigan based teams this year we project they will most likely hover around .500 for a majority of the season.