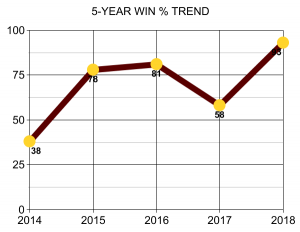 Season Preview: Where to start? This team has quite the test in front of them this season.  No school lost more talent to graduation than the Central Michigan Chippewas, putting their four-year streak of reaching the title game in jeopardy.  From what I’ve been told, only 5 players from last year’s roster remain on the team heading into the fall.

The Good News: Despite all the graduation, there is some good news still.  A few of CMU’s returners will be among the best players in the country.  Austin Brege is poised to have an MVP-level season after a very strong offseason of Elite Dodgeball.  Kevin Nguyen (when healthy) is an extremely dangerous offensive player. He will be looked upon to generate more offense for the Chips in 2018-19.  Casey Bielec and Eric Nelson are both solid all-around players who will make their overtime six very difficult to beat.  Oh, and Tyler Prill is back on the roster. He is a stellar catcher and strategic player who will certainly be a positive influence on the court for CMU.

The Bad News: As mentioned above, no team has more to replace.  Central had an extremely talented roster last year, but their ineffectiveness in recruiting new players may end up hurting them this season.  No team needs a solid recruiting class more desperately than CMU. We don’t want this to turn into a repeat of 2012-2014 when the Chips couldn’t field a full roster.

Our Call: The story is very simple.  The Chippewas lose a lot, but still have some top-end talent.  If they can fill out the back end of their roster, they will still be a top 5 team.  A winning culture doesn’t disappear overnight. Central Michigan will still be a force in 2018-19.