Overview: Not unlike 1990 Eurodance sensation Snap!, UWP’s certainly got the power. It’s just a matter of them getting enough opportunities to exhibit it.

They only compiled 7 decisions last year. Captains Erik Zander, Matt Bautch, and Brian Hargrove are committed to increasing that number, and what better way to do so than hosting the first tournament of the season. They’ll be playing host to DePaul in the Pioneer Classic, the opening match of the 2016 Season.

They’re itching to prove themselves, especially after competing so strongly in last year’s Nationals. Zander, Bautch, and Hargrove are veteran leaders that excel on both sides of the ball. Their longevity and commitment to the club will prove to be a substantial factor in helping groom what Zander calls “a promising freshman class.” They’re highly aware of their weak points – focusing on making the right catches, and jumping off to better starts instead of playing from behind. The priority strategy for this year will be controlling the tempo, and relying on the strength of their wily veterans. Matt Bautch has received heaps of praise for his all-around play. He utilizes different arm angles, crafty sneak attacks, and can throw well with both arms. Furthermore, he’s been known to have an absolute cannon. He’s got a permit for it. I checked.

It’s undoubtedly difficult to lose a significant amount of players from the previous year. As a former DePaul player, I endured the loss of 15 people going from my junior to senior year, with many of them being top players. Thus, in the early goings for UWP this season, adapting to these losses will be an arduous task. Those that once applied cogent pressure near the neutral zone aren’t around anymore, and play styles may have to change to make up for that loss of pressure. Zander, Bautch, and Hargrove’s strong connections to past captains will help them seize their leadership roles and provide a sense of continuity during a difficult transition period. I’m sure it eases their minds knowing they have great up-and-coming players such as Nick Harding and Jeremy Oney, both of whom are proficient near the line and provide superb offense.

Offense has been a strength of UWP these past couple of years, but this year the captains are committed to improving catching. Zander stressed that the team is looking to get off to better starts during matches, and catching is certainly a method of doing so. The lack of veterans might hurt this objective, but a freshman class full of potential could give UWP the boost that they’re looking for.

With so few matches under their belts, UWP can be a difficult team to judge. However, they proved their worth with an elite eight berth at Nationals this past year, and gave Grand Valley some gritty matches in the quarterfinals. They could potentially give the top teams some trouble this season, especially if they’re able to accumulate tournament experience. 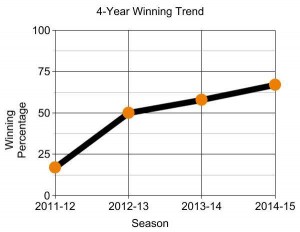