Overview:  The Three-Time Defending Champs are looking for another title for a record-tying fourth straight championship, but without a couple of their better known players.

In my three years as a member of the NCDA, Grand Valley has lost a total of four times. They are undefeated on Sunday at Nationals in that time and thus have won three straight championships. So no matter who they may have lost from last year or how formidable other teams in the league may appear, Grand Valley is the number one team until another lifts the championship trophy.

That being said, the Lakers did lose some of their better known players from years past. Half of their overtime roster is gone from last season. Dylan Fettig, Trevor Nordberg, and Jalen Gardner all graduated after last season. Dylan and Trevor were not only great leaders for the Lakers but also two-time All-Americans. But a strength of the Lakers has always been their depth, and they also lost Ben Newhouse, Paul Hillebrand, Patrick Delling and Connor Klopcic. Delling missed much of last season due to injury, Hillebrand was an experienced graduate student, and Newhouse especially was a tremendous catcher.The loss of all of these players will certainly leave the Lakers looking for new players to step up to help out their top players.

Their top player and captain is Kevin Bailey. The two-time MVP of the NCDA is back in his third year as captain for the Lakers. Regarded as one of if not the top player in the league, Kevin will look to once again lead his team to a championship. An all-around player with an exceptional ability to avoid getting out, Grand Valley always has a chance to take the point with Kevin on the court.

The two assistant captains for the Lakers are Aaron Terenzi and Austin Morley. Aaron has developed quite the power throw and now has no worries going one v. one to throw someone out. His experience as assistant captain last season will certainly help him lead this year. I’ve always thought Austin Morley was one of the most underrated players on Grand Valley. I think this year, as an assistant captain, the league will finally start to take notice of Austin. He has a throw that can get anybody out and is one of the best drop catchers in the league. I think the only reason Austin has never been an All-American is people got too distracted by the other great players on Grand Valley. Look for that to change this year.

The top of the roster for Grand Valley will be as tough as always. The biggest question for the defending champs is how the rest of the roster will shape up. I have always said that although the top players have been great, what made Grand Valley so hard to beat is their depth. They have always had fifteen skilled players on their roster.

Kurtis DeYoung highlights a talented group of second year players. He along with Bailey once went 2 on 10 against my Spartans to take the point and also caught a team throw against SVSU in the Final Four when he was the last man standing. He certainly has proved to be clutch in just his first season. Along with DeYoung are Ben Tubergen, Jacob VerPloeg, and the greatest name in the NCDA McCoy Wondergem. These players will all look to take the sophomore leap and really solidify the depth for Grand Valley this season.

Along with the returning sophomores, the Lakers also return some veteran players in Anthony Incrocci, Steven Snyder, and Chris Sherman. Anthony is a tremendous catcher. He is one of those, “I am going to get on my knees and dare you to throw at me” type of catchers. Again, Grand Valley will need these three players to up their game if they are to repeat as champions.

Every year Grand Valley seems to reload and be right back as one of the league’s best teams. Even though they lost some key players from years past, I fully expect GVSU to solidify their depth and have new players emerge as stars. Although I believe they will lose more than one game this season, that might not be the wise bet based on their history. Grand Valley will certainly be the team everyone is looking to take down this season. But nonetheless the Lakers will have one goal in mind this season: a fourth straight championship. 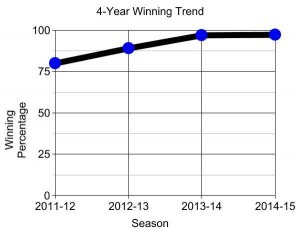