Players to Watch: Everyone… but to name a few: Brett Hadwin, Michael Riley, Michael Heller, Alex Holzgen and Ian Ryan

Overview:  The National Runner-Ups from 2014-15 are back and likely better than they were a year ago.  Bringing back nearly all their varsity players from a team that was one win away from a national title, the Chippewas looked poised for another season of dominant dodgeball.

There is a change in leadership for Central this year, as Shane Willette and Zach Bachner take over as Co-Captains, with Tyler Prill and Ian Ryan as the assistants.  I don’t anticipate this will be a problem at all for CMU, as they have many leaders on the team.

The Chips will need to replace former Captain Wes Peters, who was instrumental in the program’s turnaround over the last few years.  Despite his loss, I think CMU will be a much better group in 2015-16.  Willette and Bachner are both proven commodities for CMU, and they will have the luxury of leading a very talented and experienced roster into battle this year.  Assistant Captain Tyler Prill improved significantly throughout last season and that improvement should continue in 2015-16.

Ian Ryan, the other assistant captain, is easily one of the best players on this roster.  I’d go as far as saying he should be an All-American by the end of this season.  Ian is one of the more talented players in the NCDA, so don’t be surprised if he has a stellar season.

The Chips also bring back Scott La Valley, who is taking over as Club President.  Scott is one of the most instinctive catchers in the league, so his presence on the court will be an asset for CMU.

CMU has a star-studded group of second year players that will be instrumental in their success this season.  Alex Holzgen is the headliner here, as he burst onto the scene late in the year and earned the respect of all of his opponents.  Joe Kobus also developed late in the year, and will be looked on to produce much more this season.  He is one of the hardest throwers on the team.  Bryce Belen is another second year guy that everyone should be aware of.  He was unable to participate during the second half of the season but he is back this year, and I expect a breakout season from the talented sophomore.

A couple of third year guys that deserve some recognition as well are Michael Heller and Kris Kohler.  Heller had a great season in 2014-15, but somehow didn’t get very much recognition nationally for his efforts.  Kohler improved significantly from the beginning of the season to the end in my opinion; he should have a breakout season in 2015-16 as well.

Oh did I mention a guy name Michael Riley?  Yeah, some would argue he is the best player on this team.  Anyway, he is back, after only competing in half the season last year.  With a full season to compete, don’t be surprised when his name pops up on the All-American list at season’s end.

Jacob Leski was named an All-American in 2014-15 and he is also back!  Yeah, if you haven’t figured out by now, this team is deep.  Leski emerged as an excellent catcher last season, and I highly doubt he has a decline in success this year.  He is yet another impact performer on this roster.

Oh, one last thing: All-American Bett Hadwin is back for another year.  The former captain has one last shot to earn another national title, and with the talented group of players surrounding him, it is a real possibility.  He is undoubtedly one of the most skilled dodgeball players in the country, so having him back for another year is a huge boost for Central.

The list of impact performers for CMU really does go on and on.  This team is absolutely loaded with talent.  What will make or break their season is whether they can overcome their Achilles Heel and perform to the best of their abilities on the final day of Nationals.

The bottom line here is that CMU has all the pieces in place to finally knock GVSU off the throne in the NCDA.  If the Chippewas fail to win the title this year, they would probably be one of the best teams in NCDA history to not win it all.  If you remember nothing else from this preview article, remember that last sentence.  CMU is for real, and with a roster packed to the gills with talented players who now have an abundance of experience under their belt, it is hard to see this team dropping out of their current position as one of the top two teams in the NCDA.

The sky is the limit for CMU in 2015-16.  We will just have to wait and see if they can handle the high expectations this season. 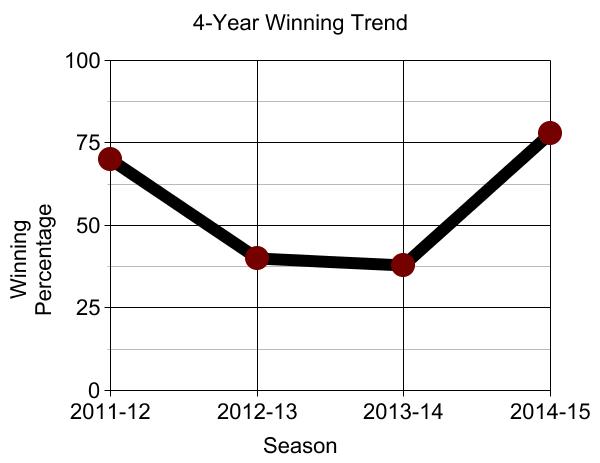