National Tournament Finish: Lost to CMU in OT in the Final Four

Overview: When it comes to JMU I normally know exactly what to say and what to expect out of them this season. I’m not so sure this season and consider the Dukes as a bit of an enigma heading into the 2015-16 season. Coming off an overtime loss to the eventual runners up in Central Michigan, the team looks to avoid the rebuilding label early in the season.

Though JMU is known for reloading their talent without skipping a beat, this year might be different. The losses from last year’s roster are absolutely staggering. Many will recognize names like Brent Gromer, Connor Ford, Taylor Wilhelm and Joey Cardella; it’s the rest of the guys they’re losing that could really tilt the scale in Harrisonburg. Lee Lucas, Chuck Humphries, Jacob Spencer, Jeremy Butcher were among a few of the other seniors that didn’t get the publicity of the other players, but were integral pieces in the Dukes puzzle. The argument could made that JMU’s 2014-15 class was the most talented to never make a championship game or win a title.

That being said I expect another top-tier roster to come out of southern Virginia. Doug Schilling and Tanner Weaver headline with plenty of backup coming with them. Ben Sizemore returns bringing leadership and experience in tandem with new President and Captain Derek Pierce. With these guys around and a few others they’ll be able to coach up their new talent very quickly.

Speaking of rookies, JMU should have plenty coming in. I’ve heard of their tryout nights having north of 200 people attempting to make the 20-man roster. Knowing this I am predicting that JMU will continue their stranglehold on the East Coast and make another final four appearance in April. The only difference this year is that there are likely to be noticeable growing pains in the fall semester.

One last note: If you play for JMU or have been around them enough you know that their club has a very family-like atmosphere around them. It’s because of that, that players like Jenn Pierz and Julie McNally will be significant losses to the program even though they didn’t get much run in the 20-man roster. Their contributions and impact over the last few years have really helped JMU reached the level they are currently at. 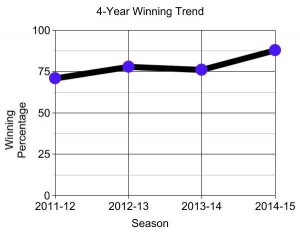