Alright everyone, pay attention.  This is important:

What is the biggest issue with the NCDA’s current gameplay format?  Simple.  It’s too slow-paced.  Not enough points are scored, and teams often decide to play “stall-ball” because it is strategically their best option in certain situations.  So, as we go through all of the rule proposals for the upcoming year, we need to keep in mind that this aspect of the game needs to be fixed.

We need to put rules in place that will make our game more fast-paced and exciting.  Sure, there are countless ways to go about fixing the slow-paced style that plagues our league right now, but in my opinion, no rule change will be as beneficial as this one:  The throw line (attack line) needs to decrease from 30 ft. to 27 ft. in the rulebook.

*Note: I’d prefer it go all the way down to 25 ft., but 27 is a less drastic change that more people will be on board with.  If it works well, we can consider moving it to 25 the following season!

Anyway, in the current NCDA ruleset, the throw line is designated as 30 ft. from the back line: 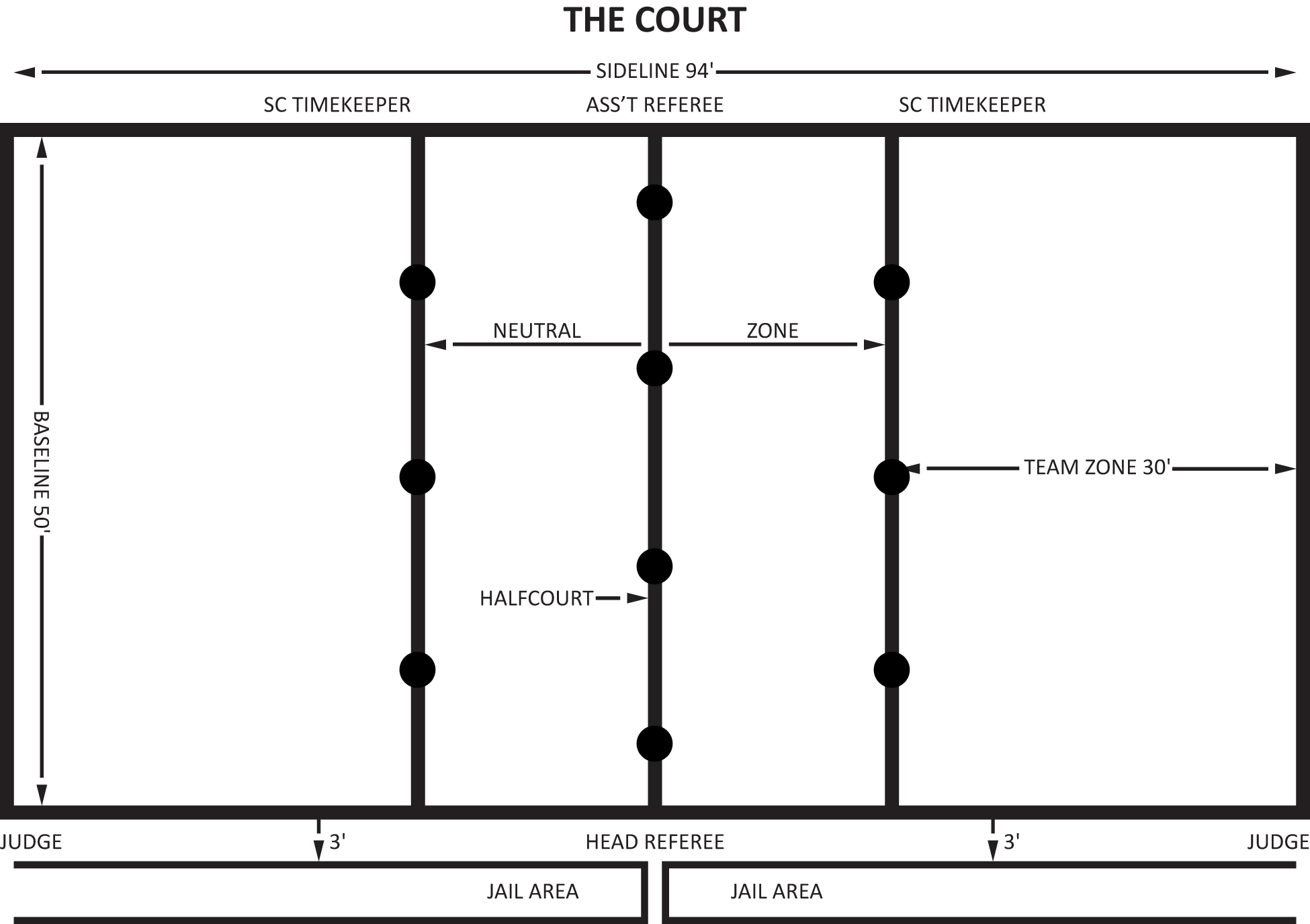 We propose that this “Attack Line” be changed from 30 ft. to 27 ft. and there is quite a bit of rationale behind this proposition:

First off, the most obvious reason: speed of the game.  I have played in dodgeball formats where the throw line is closer than the NCDA (as low as 20 ft), and let me tell you, it makes games much faster.  The NCDA throw line seems like it’s a mile away compared to other dodgeball formats!

Not to mention, Elite Dodgeball has hard boundaries, so people can’t touch out of bounds with any part of their body.  This essentially takes away another couple feet when you think about it.  People have less room to dodge, compared to if they can step back with one of their feet, while keeping a point of contact in-bounds.  So, I guess what I’m saying is, our throw line is basically 31 or 32 feet when you consider our soft boundary rule.  This is way too far away!

Having the throw line move up 3 ft. will generate higher thrown out percentages, causing points to be won at a faster rate.  People would much rather see a 5-4 game than a 1-0 game.  If the throw line is closer, it will be easier to hit people, so more people will get hit, and points will be quicker.

On top of this, the shorter throw line will also decrease stall ball.  I have noticed first hand that teams like to throw one ball per shot clock, and throw it where it is not catchable at all, then they back up and wait for their opponents to make a throw.  This style of play is very common in close matches when a team is up by one.  With no need to score anymore, they can just sit on their lead and stall the rest of the game.  I’m not hating on these teams either.  If that is a smart strategy in certain parts of the game, then they should do it.  Good for them.  But if we can change this rule, it will also change what strategy they will want to use, because it won’t benefit them as much to stall when the throw line is closer.

With a closer throw line, stall ball is simply less likely to occur.  The reason for this is because teams can’t rely on just staying in anymore.  The throw line is 5 ft. closer, so they are far more likely to get hit by throws.  This will force teams to continue to play to win rather than to stall, and cause them to make purposeful throws instead of stall ball throws that are always out of reach.

In Elite Dodgeball, the throw line is 20 ft. for Open Division and 25 for Pinch Division.  In this style of dodgeball, you almost never see a throw that isn’t meant to hit someone.  In other words, there is basically never a throw that is intended just to reset the shot-clock and force the other team to throw.

I think what it all boils down to is that with a closer throw line, the throwing team is at an advantage.  The offensive team has the advantage.  In our current NCDA, if your team just stays back and plays conservative, that is all they have to do, because from 30 ft. away they can dodge or catch most throws.  The defensive team holds the advantage in our current NCDA ruleset.

I’m not saying that I want to take away the catching in the game of dodgeball.  In fact, in Elite Dodgeball, skilled catchers are even more valuable because catching is tougher from closer quarters.  This rule change will benefit strong throwers, but it will also make good catchers more valuable.  As a whole it will just make dodgeball games more dodgeball, and less stall-ball.

If we want to see faster paced games with more excitement, making the throw line closer will help significantly.

Nobody wants to watch people stand on the back line and play super timid, then throwing a ball into the ground 3 feet in front of their opponent.  People want to see athletes playing aggressive and fast paced.  They want to see every throw count.

Our league has no chance at getting on ESPN with this 30 foot throw line.  No chance.

Our league ruleset needs to encourage aggressive play much more.  Making the attack line 3 feet closer will be a big change that will benefit us now and into the future.

I’ll conclude by saying this:

Our league right now is in a unique situation.  When top level teams play each other, the games tend to be slower and lower scoring.  This is the exact opposite of what it should be.  Big time matchups cause teams to play with more strategy that will help them win.  That strategy too often is to stall.  The rule change that will have the most positive effect on the NCDA and will eliminate stall-ball is to change the attack line distance from 30 to 27 ft. from the baseline.  I look forward to hearing other opinions on this subject.  I hope everyone is able to realize how important a change like this is for the future of the NCDA.

If you guys (and girls) plan to vote this rule down, just let me know.  I’ll give ESPN a call and tell them they have to wait another year, because our product on the court won’t be nearly exciting as it needs to be.

I agree with everything Kevin said above, but I have some additional points that I would like to make in favor of a reduced throw line distance.

First off, in regards to offense, Kevin clearly outlines the advantages from throwing at 27 feet compared to 30 feet. However, the closer throw line also opens the door for more hits on counters. Someone who throws at the throw line is now 3 feet closer. Say you don’t have the strongest arm, but are very accurate. You are now much more valuable because you are three feet closer to your opponent on your counter. A nice foot shot in transition is that much easier. And if you have a strong arm, that’s still three less feet in transition for the other player to react. To put it simply, the reduced throw line favors everyone offensively, whether you are throwing at the base line or in transition, which means more points.

Second, in regards to defense, it will make players better. Part of the reason for the blocking rule change last offseason was because 1. we wanted faster games and 2. it was too easy to block with the old rule. With a closer throw line, it will make people have to get better at blocking due to a reduced reaction time. The same requirement could be said for catching. I can speak from experience that a closer throw line has a correlation with an increase in catching skill. Due to gym requirements, at MSU we play the Spring semester on what essentially amounts to half a court. The throw line is roughly 27 feet. So half of my career dodgeball practices have occurred at this new proposed distance. Every year, my catching improved in the spring. The closer throw line made me better because it was either catch the ball or get out. When you get used to reduced reaction times, it’s easier to catch. Think about it logically. A team like GVSU has hard throwers and good catchers up and down the line up. That’s because they are used to seeing fast throws, aka they have little reaction time. Teams without hard throwers are worse at catching, because they are not used to fast throws. I guarantee if MSU allowed us a full gym to practice all year, I would be a worse catcher. Shortening the throw distance will help improve everyone’s catching ability (eventually).

Finally, hitting people with a dodgeball is fun, especially hitting someone hard. Shortening the throw line will make that a more likely reality.