DePaul v Northern Illinois (8-2)
The next match of the day was DePaul against Northern Illinois. This game started out very interesting with NIU taking the first point on DePaul just under two minutes in the first half. After that DePaul settled down and took care of business and went on to beat NIU 8-2. As a new team they played well and what helped them get those couple points was their ability to catch. They were not afraid to go for catches, which will benefit them going into the future.

Thoughts and Highlights
Here is what each team thought of the tournament and the teams that participated.

Northern Illinois’s Clint Summerfelt says:
Thank you DePaul again for having us at last Sunday’s tournament. It was a blast to bring our non-competitive sport club into the competitive scene, and with a bang no less! Both the schools that we faced posed huge challenges for my team to overcome. How to catch more throws. How to throw faster, more aggressive throws, and to better formulate plays as a team. It was a huge opportunity for my team to learn and grow as a unit. We learned how to pinch, predict throws and even back each other up on the offense. It really brought our team closer together and we enjoyed every moment of our debut tournament! 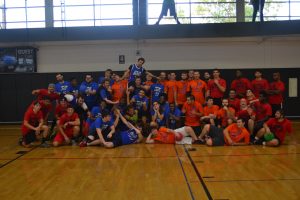 Tyler Hamilton’s Response:
DePaul had a great time hosting the DUI last weekend. We were unfortunately unable to field a very experienced roster, but many of our new players got a great first taste of the NCDA. Two of our veterans, Ricky Gonzalez and Jelani Nobel, also played very well in both of our games. Although our first game against UWP did not end with the score we were hoping for, I was very impressed with our young team’s ability to compete and keep each point close. UWP fielded a great roster full of throwers and catchers. Erik Zander did a great job of keeping his team organized and focused and Matt Bautch served as a very strong arm. He easily has one of the strongest arms in the league. As for NIU, do not let their results fool you. They are a competitive team of athletes that can flat out catch. They eliminated our entire team in less than two minutes during their first ever point in the NCDA. I almost guarantee that at least half of those outs resulted from catches. Once this team learns to pinch and play more controlled, they could make some serious noise later in the season. My MVP’s for the tournament have to be Clint Summerfelt and the rest of the leaders of the NIU Dodgeball Club for bringing 20 guys and competing every single point. Welcome to the league, fellas!

Platteville notes:
This was a great tournament, DePaul and NIU provided us with great games and areas that we can improve as a group. Both teams love to play the game and had a lot of energy and enthusiasm. DePaul is becoming a tougher team to play each time and it should be interesting to see how they play us next time. Northern Illinois University is on the right track and with a committed unit they will provide competitive matches to the league in no time. We are looking forward to playing both these teams next semester.