Happy New Year to all of you in the NCDA.

As we start out this new year, I thought it would be cool to take a look at what NCDA Nationals 2017 would look like if it happened right now.

Listed below is the bracket for Nationals if it were to take place today.  In this scenario I am assuming that every team that has played an NCDA game this season will make the trip to University of Kentucky for the season’s final tournament.  Note that the seeding is based off the NCDA’s current standings. 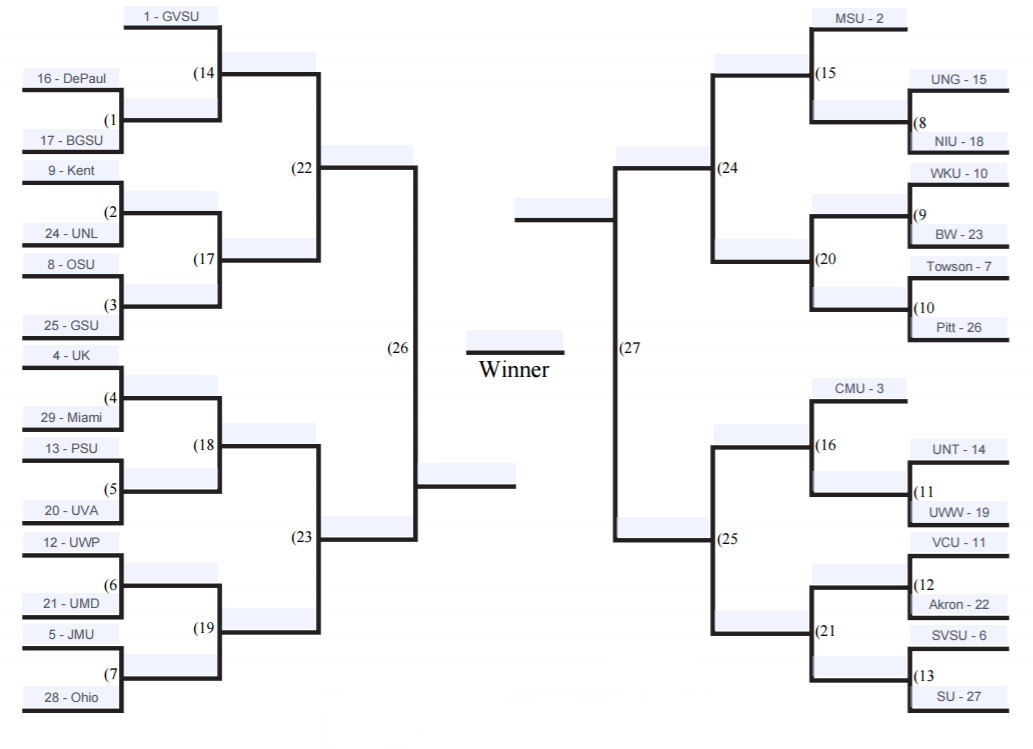 Now, lets take a look at what the results may look like if this were the case…

Below I have my predicted bracket for Nationals if this scenario were to be true.  Notice that I only predict a few upsets.  This goes to show just how accurate the NCDA Ranking Algorithm is (or at least how similar it is to my line of thinking). 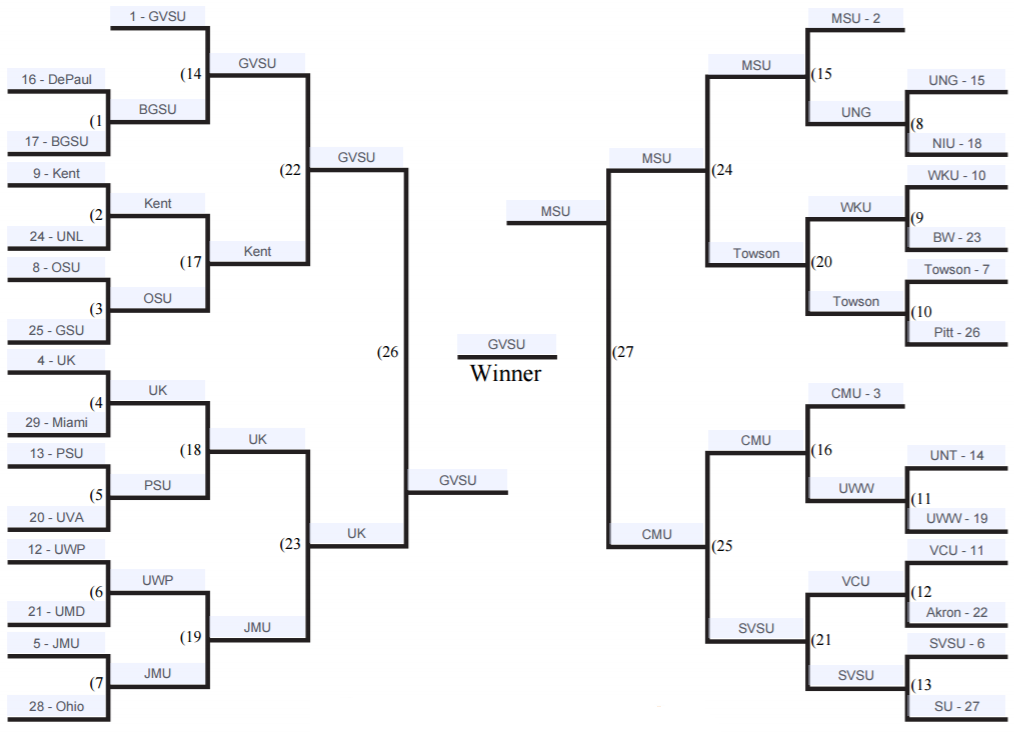 A few interesting things to note:

If NCDA Bracket-Play was today, GVSU would be the lone Michigan school on their side of the bracket.

Central Michigan, despite an awful first half to the season, would be sitting pretty at the #3 overall seed.  Yes, this is a bit high for them, and as of now they don’t deserve that.  By the end of the season I expect Central to be one of the top 3 or 4 teams in the country though.  Don’t be surprised when they make the Final Four, maybe even the title game.

Last time Kentucky hosted Nationals, they faced GVSU in a thrilling Final Four game where the Wildcats held a lead at halftime, but relinquished it in the second half.  UK would get a chance at redemption in this scenario, as they come from the #4 seed to take on GVSU in the Final Four again.

Also, last time UK hosted Nationals, it was an MSU vs. GVSU final.  This quite possibly could be the case once again.

I like the way this bracket sets up because the North Georgia vs. Northern Illinois matchup guarantees a first-year team secures a bracket play win.  I would easily take UNG in that matchup, but one way or another that would be a great momentum boost for a young program going into their first offseason.  Remember what happened to JMU after they grabbed a bracket play victory at their first Nationals?

An OSU vs. Kent matchup for a spot in the quarterfinals would be exciting to watch.  A game between the two teams who traditionally battle it out for bragging rights in Ohio.  Yep, sign me up for that one.

DePaul vs. BGSU is a tough draw.  Both teams would prefer an easier match in round one.  DePaul and BGSU should look at this and make a point to get more games in this winter to improve their seeding just a bit.  I’m sure either of these teams would be happier to take on a first year school rather than an established team in the first round.

Last thing to note: I absolutely love the UK vs. JMU game in the quarterfinals.  A Final Four spot is on the line, and these should be fairly evenly matched teams.  Kentucky playing the Dukes with their home crowd… this has the makings of a classic NCDA game.  Winner gets a crack at GVSU.  You know both those teams would lace up right now and play this one.  I picked UK, but it really is a toss up.

What do you think of this bracket?  Is it fair?  Are there any upsets that you foresee? What is your predicted Final Four in this scenario?  Leave a comment with your thoughts!

2 thoughts on “If Nationals Bracket-Play was Today”