Two very exciting events are planned for this weekend: The Dahlonega Dodgeball Fest, and The Saginaw Valley Shootout.  Below are previews for both events, along with predictions (against the spread).

Predictions against the spread: 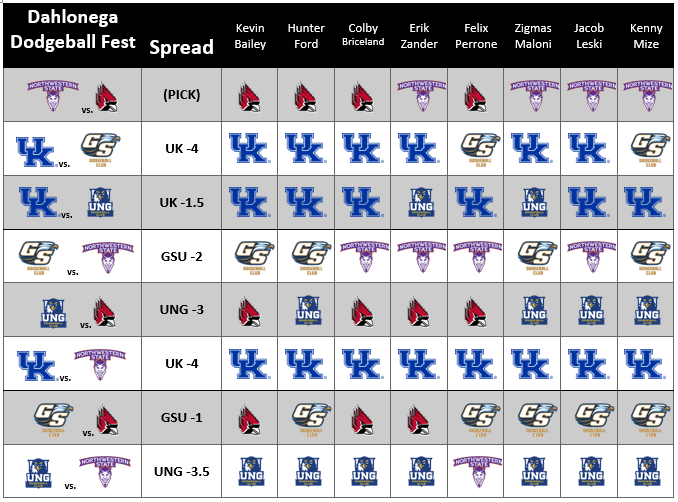 This Saturday, NSULA, BSU, UK, and GSU will be headed to The University of North Georgia to go head to head at the Dahlonega DodgeFall Fest. Across the board, there is a lot of uncertainty of how this tournament will end up, but one thing is for certain. The northern teams will put the southern through their paces, making the south work to hold their ground.  Hopefully, this tournament will mark the beginning of closing the gap between the northern and the southern teams and will be an inspiration of other teams in the league to travel further distances and compete against teams they usually do not play. So, I reached out to the captains of each team competing at the Dahlonega DodgeFall Fest to hear their responses regarding where their team stands and their predictions for each match-up.

Predictions from each team’s captain are as follows:

The 38th placing team NSULA is coming into the season hungry for wins, fielding a full roster and a larger team (30-40 players per practice) compared to previous semesters where they struggled to field a minimum roster. Although most of the roster for UNG will be rookies, this is by far the best team that NSULA has had. The lack of experience that NSULA brings is greatly reduced by team moral, athleticism, and drive to gain the experience required to claw their way out of the bottom of the rankings this weekend and prove that they’re not here to just present anymore.

Ball State is the biggest question mark of the tournament for us, as we have never seen them play and have no tape on them to watch. Though I am very impressed with their ability to put up two points against red hot Miami University (8th). I think all our energy going into our first game this weekend will be unmatched by Ball State giving us a lead on them through the halves and ending with a Win 4-2 over Ball State.

In both matches we played against GSU last year we lost 5-1. We played with a nine-man roster and a highly patchworked team that didn’t fully understand what they were doing. With a much more organized and complete roster we plan to flip the script on GSU and prove we are a serious team, giving NSULA a Win 5-1 over GSU.

When NSULA played UK last year at nationals we got a taste of what some of the top tier teams can really do. I think the rookies on our roster will need this reality check and their confidence gets a little out of hand with a 2-0 start. After dropping two quick points we will pull together and keep the game closer that most would expect. With this, giving UK the win 4-2 over NSULA.

After UNG has their first loss they will be hungrier than they already are. After losing by a combined 20-2 at our home tournament last year, NSULA will be out for vengeance. This game will be our biggest statement as we look to prove that we’re a genuine contender in the south and intend to be league contenders in the near future. I believe this will end up as a win 4-3 (OT) for NSULA.

This will be the third tournament for Ball State this season. Having played higher ranked teams most of the tournaments they attend, they are at an advantage over all the southern teams who lack that experience. Ball State has a lot of new potential this season, that will most likely end up showing vividly this weekend against the south. Key players: Kevin Frye (C), Keegan Short (A), Brad Kennis (A), and Damon Huntley (A).

This will be the first match for BSU outside of the highly competitive Midwest/Ohio region, which is arguably the heart of the NCDA. With the BSU going into our second semester as a team there are many rough edges that we have, and those have shown prevalently against teams such as Miami, BGSU, and UK. Since NSULA is our first team to play, I see a 5-2 loss for BSU, given BSU almost always underestimates the first team they play, and the energy that NSULA will be bringing will easily pick us apart the first few points.

With UNG just coming out of getting a slice of UK for the first time, BSU will have had the time to rest up to take on UNG. Being on home turf, we can expect UNG to have a full roster with fresh players on the bench, unlike Ball State. I believe this will be a close game, but a 3-2 win for BSU, and I really see Ball State going into OT to claim that last point against UNG.

Ball State will be coming in hot for this match and will challenge GSU’s ability to our full extent. Like I said earlier, the underestimation of the first few teams will be shrugged off and we will go full throttle giving BSU a 4-2 win over GSU.

Captain: Evan Kachelhoffer Assistant Captains: Zachary Parise, Ricardo Menchaca, & Daniel Lajeunesse Record: 3-5. The University of Kentucky dodgeball team has continued to improve over this young season. After a surprising performance at MSU, the cats bounced back going 2-1 at Akron beating BGSU 4-3 in OT, losing to Miami of Ohio 5-1, and beating BW 4-2. This weekend we face off against GSU, UNG, and NSULA. I think each of these matches will be slightly interesting with how young our team is and with only facing UNG and NSULA one time over the last few years. With that being said, I believe we will go 3-0 over the weekend. UNG will pose the largest threat as Royce Hogg has prepared this team to compete with the rest of the south. Zach Rivera is in his final semester at GSU and is looking to end on a high note similar to that of myself and Ricardo. I’m also excited to see NSULA at full strength and see them get some games in earlier in the year than typically. Even with it being an away tournament, there should be some support with Ricardo being originally from Georgia. As UK fans typically say, blue gets in. We are looking forward to a weekend of great matchups amongst the southern region and Ball State.

GSU started their 2018-2019 season with their annual home matches against University of North Georgia. Unfortunately, the matches turned out the same as all the previous Civil War matches did with UNG coming out with two decisive victories. Georgia Southern has a lot of rookie players with a lot of potential, but the whole team needs more experience playing in matches together to really find their rhythm. Having only played two matches this season, GSU has a lot of work to do before they can be bigger contenders in the South, but those first matches of the season taught them a lot and they plan to show all the teams at the Dahlonega DodgeFall Fest what they are made of.

This will be a first-time matchup for GSU, so they are excited to play such an experienced team as the first match of the day. UK will be GSU’s toughest opponent of the day, so GSU plans to come out swinging and give them a run for their money. Score: UK 4 – 2 GSU

GSU traveled to Natchitoches, LA last year to play NSULA and came out on top in both matches they played against them. Hopefully the Demons have gained more experience since the last time these two teams met, but GSU doesn’t plan to lose. Score: GSU 4 – 0 NSULA

Another first-time matchup for GSU, and they don’t fully know what to expect. It seems like BSU has a lot of fight in them, but GSU will come with more and plan to take the win with this one. Score: GSU 3 – 1 BSU

Once again, GSU is out to prove themselves as strong competitors in the NCDA after a rough start to the season. But after every loss and match, GSU takes what they learned an applies it to their next matches. The Eagles plan to make a strong statement at this tournament by taking home some decisive victories of their own this weekend. Players to watch out for: Brett Storie (Captain), Will Reilly (Assistant Captain), Sam Copland (Rookie), Zach Rivera.

With UNG holding a rank of 25th place, they’re at the higher end of the rankings for teams competing this weekend. They will either remain steady where they are in the ranks, or the lower and higher ranked teams will put them through their paces this weekend. This year, UNG’s recruitment has provided them with some new players that can possibly take the team a step ahead and to a new level. The most important thing for UNG is to get those players on the court to work on reducing the rough edges that the team has. UNG hasn’t been able to play much this year, but in terms of where people thought they’d be without Kyle Dattelbaum, it is evident that they are on the way up as a team.

UNG hasn’t seen much of Ball State’s potential, but with the better level of competition that BSU has been exposed to compared to the southern teams, I believe that that will pay off for them and give them an advantage over UNG. So, I see BSU taking us 2-1 (Loss).

I predict that UK will end up like BSU’s. I would like to see UNG take down both of you guys (UK & BSU) in an upset, but that is to be determined. So, I see UK taking us 2-1 (Loss)

I haven’t seen them play much and I know they struggle to get out to tournaments and have a hard time getting team to come to them, so I don’t know how good they are and how they have developed as a team since I saw them last. I predict a 4-0 win over NSULA.

Predictions against the spread:

This Sunday, Saginaw Valley State will play host to Central Michigan University for a double-header that is guaranteed to have a major impact on the standings moving forward.  Central Michigan currently sits at 3-1, good for #2 in the current NCDA Standings.  SVSU meanwhile, holds a 2-1 record and resides at #4 in the country.

These two schools have met once so far this season.  The results? Oh, just one of the most incredible finishes to a game in the history of collegiate dodgeball.  If you aren’t aware of how it all went down, feel free to catch yourself up by reading the recap from that event.  Long story short, after a back and forth game, CMU made an epic push in the final minutes to take a point before the end of regulation.  In the end, CMU star Eric Nelson eliminated the last SVSU player with a 3 seconds on the clock!

If the two games between these schools scheduled for this weekend are anything close to the excitement of that one, we’re in for quite the treat.  Don’t be surprised if we see an overtime or two this Sunday in Saginaw, Michigan.  Should be another classic event!