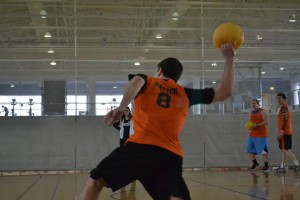 This month’s BOTM goes to Wisconsin Platteville’s star player: Matt Bautch.  As an individual, Matt had a spectacular first month to the season, leading his team to victory over DePaul in the Pioneer Classic, and then performing very well in the Grand Valley Gauntlet a week later.

Matt has proved to be one of the top arms in the league, but his improved catching is what has transformed him into a likely All-American choice.  Playing for am inexperienced team this year, Matt has had to carry much of the load for UWP, and he did just that in games against SVSU and GVSU, where he proved to be the most valuable player on the court.

Here is my conversation with UWP’s star player.  He explains his teams efforts to compete against a variety of teams this year, their successful trip to Nationals in 2015, and a ver bold prediction on how far he believes Platteville will make it at Nationals 2016.

Kevin Bailey: First off congratulations on winning Baller of the Month.  You have had a solid first month to the season as an individual, and the league has started to take notice.  What would you say is the main reason (or reasons) for this success?

Matt Bautch: Well, I would have to say that the main reasons for my success is the experience that I have been able to achieve throughout my whole dodgeball career. Past teammates would always push me to do better as well as give me tips on how to throw and catch. In the first couple years of my college career and playing dodgeball I feel that my throwing has definitely improved. But only in my junior, mostly senior year do I feel like I have improved my catching ability. I rarely ever miss a practice because the enjoyment I find out of the whole dodgeball atmosphere. Whenever I am playing a sport or doing an activity I feel the need to push myself to continue to grow and make myself the best I can be.

KB: What has been your most memorable experience as a college dodgeball player so far in your career?

MB: My most memorable experience would have to be Nationals last year. As people may know Platteville isn’t a team that everyone thinks of as a huge threat, usually not making it past the first round in the Nationals Tournament. But if teams aren’t careful we can be tough to beat. The level of intensity that our team had when going into the next round was spectacular. It was tough playing Grand Valley again but we were not going to go down without a fight. Even though we lost, it was probably the best experience that I have had throughout my whole career. Just being around the great teammates that I had that welcomed me to the team and taught me the things I know now. I’m hoping to create a new memorable experience this year when the Platteville Dodgeball team heads to Nationals.

KB: Which teams do you enjoy competing against the most in the NCDA and why?

MB: For me there isn’t a favorite team that I like to play. I enjoy playing against any and every team out there; it’s always an incredible experience to play such a variety of talent. In the past we haven’t done too much of traveling so we don’t have the knowledge to go to Nationals and understand the teams. We never are afraid to play any team, we look forward to the competition and everyone knows it doesn’t help to always play the same team constantly. That’s why this year we are looking to go to multiple tournaments to help better compete at Nationals.

KB: Your team has started off the year at 1-2.  What are your goals for the season as a team, and as an individual? Any bold predictions for this season?

MB: This year with our vast majority of new individuals we are looking to come to Nationals and prove ourselves to other teams. We plan on getting to multiple tournaments throughout the upcoming season to get new recruits the feeling of how other teams strategize.  It’s one thing to practice against one another, but the real way to get better is to participate and go play your possible opponents at Nationals. As for myself, I am looking in continuing to strengthen my arm and better my catching ability in games. I have continued to better myself every year so far while playing at Platteville. When I first started out I didn’t even know what grip throwing was; so with constant practice and tournaments, it can only get better with the right mechanics. When looking at my teammates this year, all I want is to play my best for them in my last year and hopefully go out with a bang at Nationals. My extremely bold prediction for the season is that Platteville is finishing out the season in the championship game. This is definitely my bold prediction.