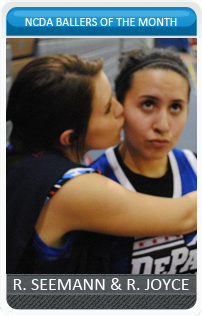 Rebecca Seemann (DePaul #9) is a third year lady dodgeballer for the DePaul Dodgeball Society and has competed in NCDA events for the past three years.

Rachel Joyce (DePaul #13) is also a third year lady dodgeball for DePaul, and will be graduating in just a few weeks.

I sat down with the both of them for an interview:

UPDATE: Here’s a interview with this month’s Ballers of the Month. Becky insisted we include Rachel Joyce, graduating senior for DePaul and playing #12. She’s a fantastic and talented player, garnering headshots everywhere she goes and devastating the opposing side with sniper shots.

Zigmas Maloni: Hello Ladies! Lets start this off simple. Name your favorite team you’ve played against or with:

Becky Seemann: Kent and Kent. Mainly because Layla. And mainly the least because of Billy.

BS: He’ll understand it. That’s all that matters. Overall Kent’s just a wonderful, brilliant, sexy, talented group of dodgeball specimens. (Billy included) And I wish I can shake the hands of all of their mothers and personally thank them for raising such magnificent children of dodgeball.

Rachel Joyce: What’s the one with the girl captain? UWP? They are a high energy and intense team to play against and that’s how DePaul likes to play. So that team was a blast to play against. Also JMU is a really intimidating and serious team when they play other teams but I love that they are willing to loosen up and just have fun when they play us. Plus they taught us a really awesome version of dodgeball [Freezeball] so there’s that.

ZM: Rachel, now that you’re graduating, what are your dodgeball plans?

RJ: Other then playing a major role in the Dodgeball 2 movie, I’ll be playing in a summer league for the second year, as defending champs. It was a blast last year so I don’t expect anything less for this year. I will also hopefully be participating in more tournaments through the Midwest Dodgeball group given that I get a real job and have travel money.

ZM: Both of you have played in the past two Ladies’ Matches at Nationals. Can you describe your thoughts on it?

BS: I think its a great opportunity for everybody to get to play. Even with this being a coed sport, it’s dominated by men–numbers wise. And it’s great for the girls that travel with the team to Nationals to be guaranteed some play time.

RJ: Not only is it a great opportunity for the girls in the league to show their stuff, it is also a blast to just be able to play against other girls. Hopefully it will spur some change throughout the league and more teams will allow their girls to play in tournaments.

ZM: DePaul has a strong tradition of female involvement on their rosters, going back to its founding in 2000. How do you feel being part of that tradition?

BS: How do you know I’m a woman!? How dare you assume! Leave my sight at once.

RJ: It makes me feel warm and tingly inside.. but really its great to be a part of a team and be allowed to play in tournaments because not all the ladies in the league have that luxury. It’s been a great experience, as many DePaulers have said in the past, our team is a tight knit group of people that resemble one big dysfunctional family.

BS: I think its great that we encourage not only girls to play with us at home, but also encourage girls to travel and play at other tournaments. I think DePaul is a great team to show what a coed team in a coed league truly is.

In this past season, Rebecca played well in the Ladies’ Match at Nationals, including scoring a headshot [at the 24 minute mark. She wears DePaul’s black alternate #9 in the video, and towards the end you can see her run across the attack line to give the recipient a hug. That’s known as the customary headshot hug rule at DePaul.

And earlier in the season at the DePaul University Invite with the help of Rachel, Becky won a 1 on 1 showdown with a UWP player, cinching the only point for DePaul in that game.

Now points won by DePaul are fairly rare, this point being one of two won by the team for that entire event. But every single game played by DePaul is memorable, so here’s a short play-by-play for this particular point.

The score is 4-0, but that doesn’t necessarily dictate the way DePaul plays. The situation is two on three, advantage Wisconsin-Platteville. Rachel Joyce [#12] and Mario Romanelli [#85-R/X], also third year players for DePaul. Mario went for a catch, but suffered a debilitating injury requiring a trip to the hospital for a dislocated finger (He’s back on the floor with even better accuracy as of publishing date).

After this pause in the game, Rachel is left to a 1 on 3 situation.  A spectacular player in her own right, Rachel manages to even up the odds by scoring a tag on one UWP player and catching out another player, entering Becky into the game. Rachel is then tagged out and the situation is a one on one situation. If this happened at a normal DePaul Dodgeball night, we’d all circle around the two, create all sorts of ruckus, and have a good old round of Gladiator Dodgeball. Even during some NCDA matches, DePaul will commandeer the court for a gladiator match [most recently OSU v DePaul at Nationals 2013]. But this time it played out by the book.

The two exchanged throws for close to a full minute in the heat of dodgeball battle, neither gaining much of a foothold. With most dodgeballs on Wisconsin’s side of the court, a critical moment in DePaul history was about to be had. Becky scooped up a catch in order to win the point for DePaul. As in all wins by DePaul, the team rushed the court. Matt “Howitzer” lifted her into the air. The rest is for history.

It’s single moments like these that are the great definitions of a student’s collegiate dodgeball experience; something that makes our League special.

DePaul has always included women and played them in matches. Both Rebecca and Rachel act as leaders for DePaul Dodgeball both on an off the court. On the court, DePaul forces every possible bit of fun out of the game, rather than explicitly trying to control the game. They both carry on the tradition and embrace the upcoming generations, helping female friends and teammates with DePaul’s brand of the game, helping them adjust to the college experience. Many of the teams that have good relationships with DePaul will also recognize Rebecca as a friend, a great example of how the NCDA has brought people together from different areas of the country. Many will probably feel the sting of a cross court snipe from Rachel, and remember Becky yelling taunts from across the court.

Rachel graduates this year, in June, with a major in Art. She says she’ll continue to play dodgeball in the Chicago area and socialize with the local dodgeballers, and she will most likely be back for Alumni night.

With one more year left for her undergrad, Rebecca will graduate DePaul with a major in education, with an interest in teaching history. She’ll likely continue to be a regular at dodgeball up until then; she’s had near perfect attendance for the duration of her college career.