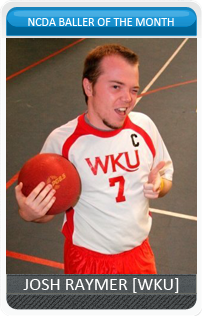 For Alumni Appreciation Month, we’ve decided to highlight an alumni that never received BOTM in his time. Probably because he created the concept and couldn’t just go boasting about himself! Here’s an interview with Josh Raymer, otherwise known as Jazzy, about dodgeball, website, and podcast golden days.

Josh “Jazzy” Raymer: My favorite experience from my time with WKU Dodgeball was our home game against UK in the fall of 2009. We had a great crowd on hand – probably 200 people – and our team had gelled into a pretty formidable unit. It was a back and forth game that eventually went into overtime. I was worried that the momentum had swung too much in UK’s favor, but the raucous home crowd pushed our team to another level in the extra period. We were determined to protect our home court and that’s exactly what we did. When that final UK player fell, we all rushed halfcourt and jumped up and down celebrating. The crowd was celebrating like WKU had just won the BCS National Championship. It was the classic sports movie victory scene in every sense of the word.

My second favorite memory was from the inaugural Clash of the Commonwealth at Elizabethtown High School. We were playing the University of Louisville to help raise money for EHS’ Project Graduation. I loved playing in fundraising games and my team was at the height of its powers. That’s a nice combination. We dominated the Cardinals and enjoyed another great crowd. Afterward we signed some autographs and got to feel like actual college athletes. We also tried a few goofy things like a synchronized drop to the floor when UofL threw at us and playing a basketball game during the middle of a point. I guess you could say we put the “fun” in “fundraising.” (Sorry)

ZM: Any comments on starting the website and initiating Average Joes’ Podcast?

JR: I’m a bit of a tech junkie. When I started getting more involved with the NCDA in 2008, I had a real interest in redesigning the league’s website and producing more NCDA-related media, like podcasts, which I hadn’t produced before but wanted to try. To help grow the league, I knew that we needed a strong online presence so interested students could get a firm grasp on the style of dodgeball that we played and how many schools were involved with the NCDA. I also wanted to humanize our online presence by putting some names and faces (or at least voices, in the case of podcasts) in front our ever-expanding audience.

I asked Bomis in the spring of 2008 if I could take over the website duties and he happily agreed. I wanted to create an ESPN-style site that could serve as an attractive platform for our videos, photos, podcasts and stories. For someone who didn’t the know the first thing about Dreamweaver or HTML, I thought I did fairly well after some trial and error. Once the site was up and running, I turned my attention to recording the podcast, which I had dubbed Average Joes’ Podcast because of the name recognition from “Dodgeball: A True Underdog Story.”

I recorded six episodes before handing things off to Zac Newton and Alex Heichelbech, and as we all know, it was downhill from there. But those first couple episodes (especially the first one, Ep. 7) were really good and showed the promise of AJP had Zac Newton not been a train wreck of a human being. I’m glad the podcast has continued in Sam and Mike’s capable hands and I couldn’t be happier about the improvements Zigmas and crew have made to the website. With the way the NCDA has continued to grow since the website overhaul, I know all the blood, sweat, tears and dollar bills were worth it.

ZM: You produced some great stuff and started an identity. Any other shout outs or accolades you’d like to bring up to the dodgeball masses?

JR: I’d like to give a shout out to Aleks Bomis for being the grandfather of college dodgeball and refining the NCDA into what it is today. Props to Felix Perrone for pushing WKU further along the path to greatness than I ever thought possible. To any and all team founders, I say thank you for the countless hours you spent building your program. The NCDA doesn’t exist if not for diligent, hard-working people like you.

ZM: Surprise! You’re Baller of the Month for January. What say you?

JR: It is truly an honor to be named the Baller of the Month. I dreamed this day would come when I created this award all those years ago, and now it’s finally here. I’d like to thank all the dodgeballers I met during my time with WKU. You all are like a weird, lovable and possibly deranged extended family to me. I hope my story can serve as a lesson for young college dodgeballers: create an award for a website, and one day you might just win it. Thank you!