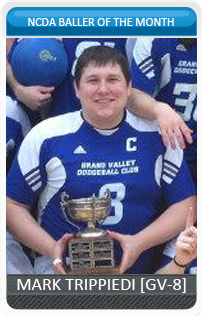 Mark Trippiedi (GVSU #8-C) recently led his team to a record sixth Michigan Dodgeball Cup title (no other school has more than one championship!) with his power throw, catching, and leadership. His #4 GVSU Lakers currently have the second best win percentage in the NCDA, and are one of the title favorites for Nationals.

Sam Hiller: You guys won your record sixth Michigan Dodgeball Cup, but your first since 2011. How are you going to keep the team motivated going into Nationals?
Mark Trippiedi: Last year was the first time in history of our club that we didn’t win either the MDC or the National Championship. So that has been our drive all season. We accomplished our first goal with the win this past weekend and now we are focused on the goal of a National Championship. We lost a tough game to a very good SVSU team in the semi-final last year and we haven’t forgotten and we will use that to hopefully complete our final goal.

SH: You guys have been great in overtime games this season (2-0, victories over MSU and SVSU.) Is the secret to your success just that you have a better top six than the rest of the league? Or do you guys have a set plan for going into overtime?
MT: I’m so confident in our top 6 against anyone in the league, each one of us can do it all, they biggest keys in both overtimes have been catching, it really has been unplanned and it has just worked out, we don’t usually have a plan we just like our chances playing against anyone.

SH: You yourself have been playing well this season, playing as a true all around player all while leading your team to the second best win percentage in the league. How do you balance playing your game with trying to lead your team?
MT: It has been a process over this year and last learning how to be able to play at a high level as well as be the leader of the team, This year I have tried to do all the captain work during practices with any strategy that needs to be learned and letting the team know what is expected from all of us. During games this year I’ve tried to let my play lead the team.

SH: There’s been a lot of talk about non-Michigan teams catching up to the Michigan teams this season. Do you think the National Championship trophy will remain in the Great Lake State? Or is this the year that a Kentucky, Kent State, or James Madison (for example) comes home with it?
MT: I think this year the National Championship can still stay in Michigan, with that being said there are plenty of teams that can make a run and should be considered contenders. I think that speaks great things about the league that there are now multiple contenders outside the state of Michigan. I love our chances this year but nothing is going to come easy at this Nationals Tournament. I think it is safe to say there are 6 teams that are right there (GVSU, SVSU, MSU, UK, Kent, JMU) and then even a few dark horses that can make some noise.

SH: You’ve been apart of many of the greatest games ever played, any particular favorite game you’ve been apart of?
MT: That’s tough, there are about 5 games to pick from to be considered my favorite. My choice is going to be the 2012 National Quarter Final against Central Michigan. The year before we lost a thriller to them in the National Championship and the game was so intense the entire time. We were down 1-0 at half and came roaring back in the second half to eventually win. The speed and pace of the game was so high that there was always something happening on the court at all times. No wasted throws were happening, every action had a purpose (how dodgeball should be played haha). The whole game was sprinting up and down the court. I don’t think there will be a game played at that speed the entire 50 minutes again. So that is my choice, Hands Down!