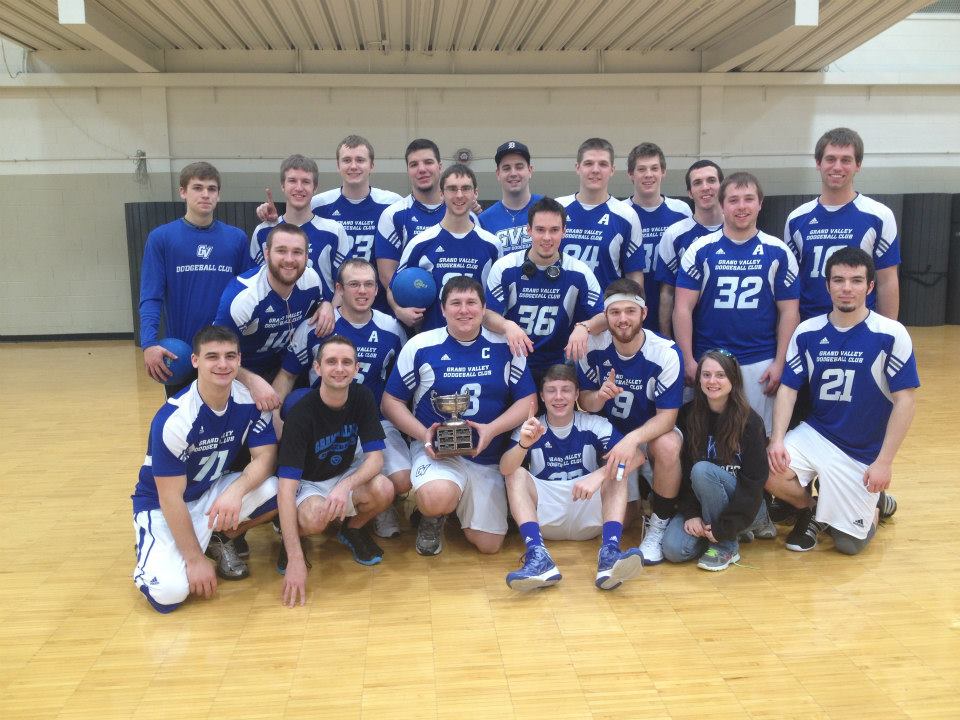 The #4 GVSU Lakers won their record sixth Michigan Dodgeball Cup, going 3-0 on the day with wins over #6 SVSU (2-1 in OT), #10 CMU (4-0), and #3 MSU (3-2.) Grand Valley had a team effort, as their depth really showed in the tournament. There were multiple times that star players Mark Trippiedi (GVSU #8-C) and Dylan Fettig (GVSU #24-A) were on the bench, and the Lakers were able to hold off rallies and win points. All four teams had good showings though, with everyone having bright spots in their games.

Michigan State jumped out to a quick 1-0 lead in the first half thanks to great catching and teamwork, despite the best efforts of Bryce Corrion (CMU #00-A) who caught an ball off his face. The second point took much longer, with the Chips getting a big man advantage before some clutch catches by MSU allowed the Spartans to hold off CMU until the halftime buzzer, making it 1-0 State at the half. In the second half State started to pull away, as their depth made it tough for Central to comeback once their star players were eliminated. MSU would go on to win 3-0.

The third “Battle of the Valleys” this season was a classic one, as the game would go into overtime. The Lakers won a hard fought, back in forth point in the first half, but they couldn’t finish off the Cardinals at the end of the second half. A long, drawn out point led to a Cardinals point in the second half, and it was looking like déja vu for GVSU from their loss at SVSU. But the Lakers would go to overtime, and would win after a disputed call against SVSU.

GVSU was able to run away with this one, as they limited the damage that the CMU star players could do and picked off their weaker players. Captains Mark Trippiedi, Dylan Fettig, and Kenny Bacchus (GVSU #32-A) all had great performances, and they were able to wear away at the Chippewas.

Grand Valley jumped out to a 2-0 lead at halftime, as once again the Spartans came out flatter than their competition. Trippiedi had a monster first half, throwing and catching out Spartan after Spartan. Michigan State really had no answer for the Lakers offense in the first half, but they came out firing in the second half, as they took the first point of the half in around 7 minutes. As it began to look like the previous MSU game (vs SVSU), the Lakers knew that they needed to quell this comeback, and they took the next point rather decisively. MSU would pick up another point before the game ended, but it was not enough to pick up their first all-time win against GVSU.

Central hadn’t picked up a point all day, but they put a scare in SVSU as they were able to take the first point of the game. This might have woken up the Cardinals though, as they were able to rattle off 4 straight points to down the Chips. The last point was more of a “for fun” point than anything as well.

All four teams had good outings, and Saginaw and Central seem improved from their first semester rosters. Michigan State, Saginaw Valley, and Grand Valley seem like definite title contenders, and CMU looks like they could be a dark horse Final Four team. Some of the players who really shined were Bryce Corrion of CMU, Mark Trippieidi of GVSU, Eric Paul of MSU, and Zach Phelps of SVSU.

With the games won, MSU moved into third in the NCDA standings, GVSU fourth, SVSU stayed at number six, and CMU dropped to tenth.