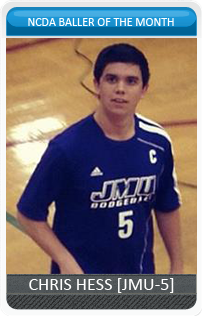 This month’s Baller of the Month goes to the Captain of James Madison University, a school in Virginia on the East Coast. As of Dec 15 of this year, JMU is 6 wins and 1 OTL this season, and planning to host the BEAST II after the new year. Here’s a little interview with Chris.

ZM: JMU Club Dodgeball has started its second season in the NCDA, as well as its second year as a club at JMU. The team has been the most successful new team since GVSU started playing in the induction of the NCDA after the progression of the Midwest Dodgeball Conference. Could you share any secrets to that success?

CH: Our success is believed to be derived from our team cohesion. When someone joins JMU Dodgeball, they are joining a family more than a team. We do so much together on and off the court, we always have the trust between each other when we are in a match. With a little help of recruiting and watching some film, we have developed a team that built on great cohesion.

ZM: What kind of play style does JMU excel at?

CH: Throughout these past two seasons, our team has found out that we play better when we play strategically rather than an all-out offense. JMU has the arms to play all-out if we want, but we’ve found that we make ourselves too vulnerable playing all-out. With a big spring semester coming up soon, we will need to work on some things to legitimize our standing within the rest of the league.

ZM: Do you have any favorite dodgeball moment of the past two years?

CH: I’ve had a lot of great memories even though we’ve only been in the league for two years. My personal favorite was at this past year’s Nationals when we defeated Michigan State. When we found out our first day matches, our goal went from “let’s see how well we can do,” to “if we take it to Michigan State, we could make some serious noise.” That was our goal, and we executed it perfectly.