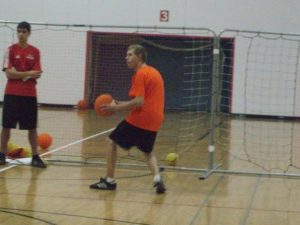 would be fitting to write about how Platteville’s club got started.  Our club started over ten years ago and I’m so happy that it did. I have met a lot of amazing people and made a lot of great friends because of it.  To help tell how the club got started we talked to the founder of the club: Scott Skelly.

Here is a conversation that Platteville’s content writer Carter Vosters had with the founder Scott Skelly.

Carter Vosters: What is your name? What do you do for a living?

Scott Skelly: My name is Scott Skelly and I am a fruit and vegetable farmer in Janesville, WI.

CV: What made you want to start the dodgeball club?

SS: One weekend night in early 2007 and group of friends from Morrow 4E decided that we missed playing dodgeball since high school gym class, so we went to Walmart and bought 4 rubber balls and headed to the PAC. However, when we got there we were told that only basketball or tennis was allowed on the courts. We tried to sneak in anyways, as it was dead being a Friday night, but we were politely asked to leave. We headed down to Memorial Park and played there instead even though it was winter and almost no light.

We had fun and decided we might want to play again, so we started with Curt Fatzinger to formally form a club. It was only then that we started to research dodgeball more and learn of the NCDA.

CV: Who helped you make the club?

SS: Ian Lehrer was the other person that helped me out as we got started out by helping to go to all the meetings (I think we had to get approved by four different organizations to be a club) and draft our constitution. Between the two of us we also pretty much self-funded all the equipment for the first year or two including renting a bike locker on campus to store all the balls.

However, it was a great group of about 10-15 original members that gave us the backing we needed even before we were a club. From day one Ian and I both knew that the two of us honestly weren’t that great at dodgeball, but it was fun. We told everyone that if there was a desire to play more, we would go through the work of making a club.

CV: What were your original aspirations for the club?

SS: I think we just wanted to play dodgeball. When we started forming, we had no idea of the NCDA and a small group of people so we were playing six-sided dodgeball like everyone was used to. We just wanted to play dodgeball with friends. But the more everyone played, the more we wanted to compete. Becoming a club took almost the entire second semester of 2007 so we could not officially rent court space or compete in tournaments. Even if we could, DePaul was the only other club within a day’s drive and the next closest teams were in Michigan.

CV: How did you get the team prepared for the first game? How did it go?

SS: Since we were not officially a club yet, we skirted the rules of not being a club by going to non-collegiate tournaments under the name of just Platteville or Platteville Dodgeball Players so that we technically were not using the University name. Our first tournament that we could find was a foam ball tournament in Schaumburg, IL. We ordered some foam balls online to prepare, but it was still tough. We entered two teams with 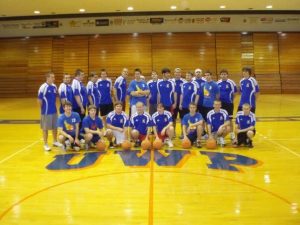 one team stacked with our better players. I think that team took 2nd or 3rd, but I of course was not on the stacked team, so I can’t remember for sure. It was a great experience and we met some Platteville alumni that thought it was cool that dodgeball was becoming a club sport at UWP.

We also started playing at a couple of Madison bar tournaments, and we actually won some of those which came with cash prizes. However, at our first Nationals at Ohio State in 2008 we got blown out most of our matches. Our only win came against another brand new club (CMU) who only had about 8 guys there. Those 8 guys were some of the best players I ever saw and we still almost lost, but we were happy for one win.

CV: What do you think about the dodgeball club now? Is it exciting seeing where the club has gone?

SS: It’s pretty awesome to see the club growing strong and also the NCDA. After our first official year as a club I stepped down as President after my sophomore year and told the club that someone else had to take over as President because I want to make sure the club was building the strength to survive beyond our time at UWP. I probably drove the next president nuts the next year telling him what to do all the time, but they did a great job as many classes since have to keep the club strong. Recruitment can be tough and it is great to see the club playing a lot more games than we could ever have dreamed of.

CV: What is something you would like for the club to accomplish?

SS: Win Nationals of course. Even making it to the Final Four would be awesome. The skill level of the NCDA has evolved so much that the competition has become much tougher. During my time, we played very few matches outside of Nationals because there were no other clubs in our region. Just seeing new schools in Wisconsin is exciting for the club going forward. I also hope to attend a UWP vs NIU game at some point as my wife earned her undergrad and masters at NIU and I have some connections to the campus.

CV: Does the current club meet the goals you had while creating the club?

SS: It has far exceeded. Our first goal was to be able to be a club so a group of friends would be allowed to play dodgeball in the PAC during the winter. What the club has grown to and has survived for almost 10 years is far more than we ever imagined.

CV: How has the sport changed since the dodgeball club was made?

SS: The NCDA has grown immensely and the competition has gotten much more competitive. When we started the NCDA had about 12 teams with about 8 of them in Michigan. We had never played a match before attending Nationals. A few players on a few teams were doing this new type of throw called pinching. By the next year all the good players were doing it (so in other words pretty much everyone besides me).

CV: Is there something that has surprised you about either the club or the sport?

SS: I don’t think so. My best case scenario was that the club was still exist years later and that more area colleges would have teams. For me, I think it is just as exciting to see UWP finally having more area teams than anything. We longed to play more games with NCDA rules (I loved the 15-person game over the 6 v 6), but we had no one to play. To see UWW, NIU, UW-Eau Claire, and even Nebraska is pretty awesome. I think with the opportunity to play more games UWP will continue to become a stronger team each year.

CV: What is your favorite memory while playing dodgeball?

SS: National tournaments were always awesome, especially when we played schools around our skill level. DePaul was always a blast too as at that time they were known for being the group that cared far more about being weird and having fun than ever winning a match. 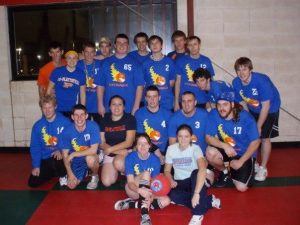 in Memorial Park. It was our first official club function and our first recruitment of any type outside of the two floors that played from Morrow and Hugunin while we were forming. We had over 200 people show up and had no idea how we were going to run a tournament with that many people on 4 courts. But it worked and we knew we were on to something. It was cool to see and the talk of campus for a day or two.

CV: Did you ever make it to Nationals?  If so, how was it?

SS: Because the NCDA was desperate for growth we were welcomed every year with little or no prior games. Nationals at Ohio State was the club’s first NCDA match, but it was an awesome experience.

CV: Any other comments/ insight?

SS: I think it is really awesome to see the club still going strong. Yeah, we helped get things going but there has been 10 years of dedicated members and officers to help keep it going. I look forward to maybe attending a future home tournament as a fan and see the team play again. I would love to see a group of alumni come out to show their support for the team.

I would just like to thank Scott Skelly for answering all of our questions and for going into such depth.  He helped start our club off in the right direction and we’re growing. As a club we are a club I feel other teams respect and enjoy playing us. This is something that he should definitely be proud that he helped create.