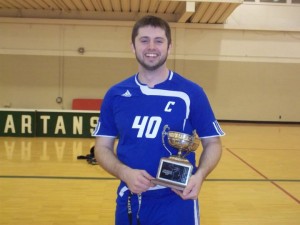 There have been plenty of excellent dodgeball players that have come through Grand Valley. Jimmy Stokes is another one of those great players, however besides being an amazing player, he also was a 2 year captain for the Lakers which came at one of the most important times for Grand Valley Dodgeball.
Most people can remember Jimmy Stokes by the #40 he donned each year in a Laker uniform to, his devastating throw in the mid to upper 70’s range that would tail off or even knuckle, and at times could even be mistaken more for a homing missile then a dodgeball, where seemingly more often than not, it connected with its intended target.

Stokes began playing dodgeball for the Lakers as a freshman in 2006-2007 season, and immediately was able to join a group of stars on the GVSU roster that was able to dominate the NCDA through 2009-2010 season where they only lost 1 game in that 4 year period (an MDC loss to CMU), as well as captured 4 straight National Championships.
Stokes took over as the 3rd captain in program history for GVSU at the start of the 2009-2010 season. In his first year as captain he lead the Lakers to a record that included only one loss, and the year ended with the 4th National Championship in program history where they rebounded from a MDC loss to CMU to beat them in the Final at Bowling Green. 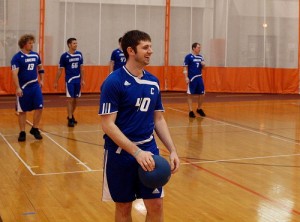 Stokes 2nd season as captain was one that had a very different look for the GVSU dodgeball program compared to all the other years. The program faced major roster turnover for the first time since the club had started in 2005. 12 players from the previous National Championship were no longer within the club at Grand Valley. Recruiting and developing talent had never been so crucial to GVSU before this point. Jimmy and his assistant captains were up for it as the now young and inexperienced roster preserved through a tough start to the year (0-2 start, losses @ SVSU, and @ CMU) to capture a 5th MDC title and go through the National Tournament to once again appear in a 5th straight title game, although GVSU lost to CMU the base for the future at Grand Valley was set.
Now a member of the workforce you can still see him at a few NCDA events as well as a possibility you may run into him in one of the many dodgeball events hosted in either the Detroit or Chicago area.
Jimmy helped build the foundation for the current Laker team that has stayed in the top tier of the NCDA since his departure; He will be remembered as an amazing player as well as a great captain. His #40 has been unofficially retired by the current club leadership.