Two pioneers of the NCDA game for women, Andrea Mason (MSU #12) and Molly Fannin (DePaul #17, retired) all played in multiple Nationals tournaments, countless games, and were just as good with their male counterparts. 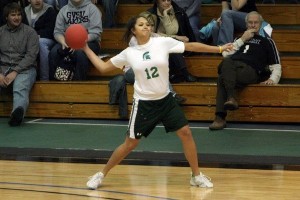 Andrea Mason was one of the original female players for Michigan State, and played from 2007-2010. She also suited up for LCC in their appearance in the 2011 Michigan Dodgeball Cup, and was an All-Star in 2011. She had a stronger arm than many of her teammates, could catch well, and greatly contributed to Michigan State’s success as they turned the corner from average NCDA team to among the Nation’s best. She currently attends Central Michigan University where she is attending physical therapy school. Andrea was extremely welcoming to all the new players for Michigan State, and was a great friend to all on the team.

You can’t talk about DePaul Dodgeball without recognizing the team proudly puts ladies on the team, many of which are important players. This coed tradition started early in DePaul’s competitive ambitions with Molly Fannin [DePaul #17, retired]. Molly was Vice President for DePaul from about 2005 to 2006, helping the team travel to the first and second National tournaments, as well as competing at several local events. Molly used a fast softball windmill style throw that had a sort of coasting effect that would sneak up on your ankles. And aside from that, she could catch. DePaul Secretary Ian Petchenik [DePaul #3, retired] comments:

Molly catches balls. That’s what Molly does. Molly catches everything. If you want to say throwing is offense and catching is defense, Molly is one of the best defensive players we have. [DePaul Dodgeball Documentary 9:30]